The Night Troops 2: Wisdom of the Ancients (click to enlarge)
STORYLINE: Killing the boy king Tutankhamun was only a lesser of Horemheb's many crimes in the pursuit of ultimate power. He also burned down the Library of Alexandria. Why? Because brilliant Greek engineers had invented steam-powered engines and he wanted this amazing technology for himself. Under his leadership, the underworld flourished as they created more and more wondrous steam-powered inventions. Horemheb was the undisputed God King of the vampires for over 3 thousand years.

In this post I'm showing some things you can pick up at Clockwork Spiral, but also I want to show a peak at FATEwear's new fall line for men. I love this coat. It comes in long and short, and you can wear a turtle neck or shirt and tie below it. The fatpack versions are nice with texture change hud for jacket, shirt, and tie. The fur stole is by Junbug. I picked it up at  the Mystery Gacha and it worked perfectly on me! Try to score one in the yard sales if you missed it. The Andrew hair is a nice romantic style for guys by Tableau Vivant. Now let's talk about the Spiral! How about those Spatz! I love them! I have wanted boots like this for some time. I don't care if they are for girls, I wore them anyway. They came so, so close to working for the guys, just need little bigger leather top and new alpha. I could have worn a black leather top and you would not notice the poke, but I liked the orange better and retouched out the poke. Please, if you try the demo and like these boots, I recommend you write Refined Wild to request a male version of the SpatSmasher. They are really cool. Speaking of cool, these Plasma Distorter Guns! Aren't the great? They are another fun toy by Souzou Eien. The are props but also mod if you want to add your weapon script. The Derby hat and googles are part of the Immateria Arcane Finery outfit for men. 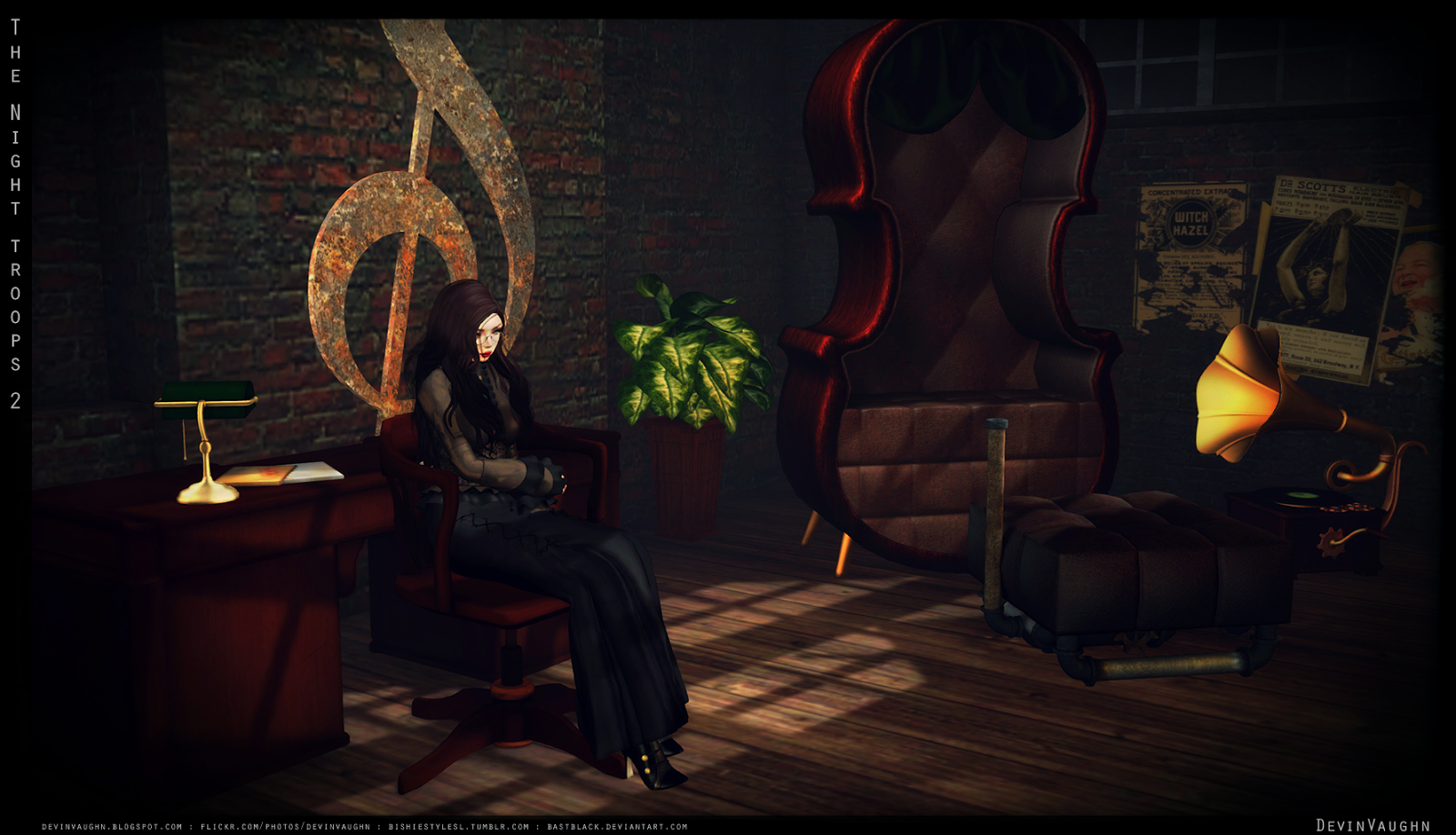 (click to enlarge)
STORYLINE: Horemheb's long suffering assistant Isabelle Stryker was disheartened by the news of Maximilian's betrayal. When she told the boss the bad news, he flew into a rage. Humans were below vampires! It was outrageous Maximilian was cutting deals with them! But not to be out maneuvered, Horemheb quickly cut a deal of this own with the other side. To make sure his new friends would win the war, he offered the Wisdom of the Ancients. It was no concern to him what the lowly creatures would do with it, humans were food. Never the less, they were delighted with the gift. New and powerful weapons would be created. To honor him, they redubbed him "Kaiser Kruel," for his wrath was a terrible thing indeed.

Kariritaisho returns for some Clockwork Spiral. If good luck holds, she will be back for one more ACS post! She is wearing the outfit by Roawenwood, boots by Lassitude & Ennui, and glasses by Eclectica all on sale at a Clockwork Spiral. With the exception of the Epia desk, Noctis posters, and Trompe Loeil skybox, the rest of the furniture is by 22769 [bauwerk] on sale at A Clockwork Spiral.