The Hand That Gives Takes Away 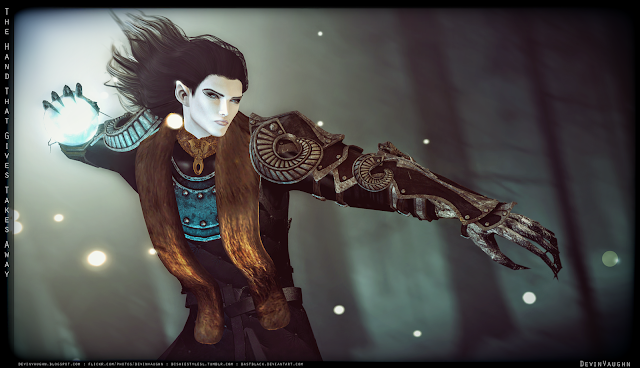 (click to enlarge)
STORYLINE: It had been a cruel fate how the A.N.G.E.L. was cursed with eternal life. If not for the cannonball that blasted off his arms during 100 Years War, his might have become a legend. As the pool of blood grew, a dark shadow fell over him blocking out the moonlight. "Great warrior," it whispered. He had assumed it was the Grim Reaper. "Leave the petty disputes of mortals behind. Come. Be a Knight of Eternity." Surviving death appealed to him, so he accepted. But without his arms how he could fight? He was helpless. It was a cruel irony. Refusing to give up, he learned the secrets of dark magic and borrowed limbs from corpses. However it was never truly satisfying until he discovered the wonders of the 21st century, -- cybernetics. 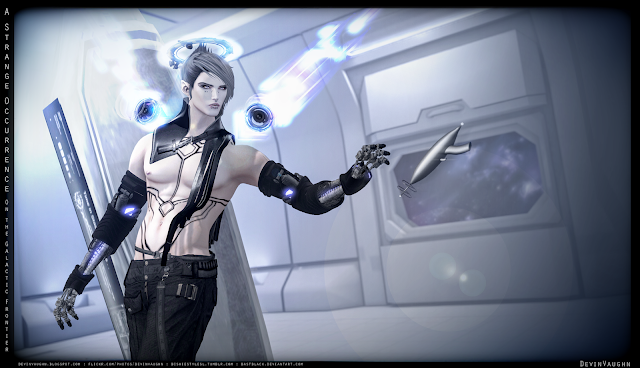 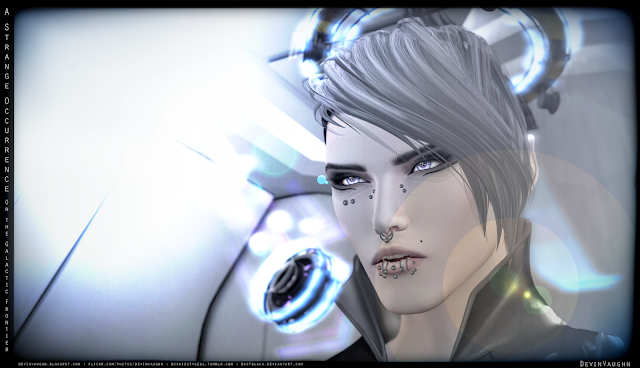 Posted by Devin Vaughn at 3:12 AM No comments:

A Strange Occurrence On the Galactic Frontier, 1 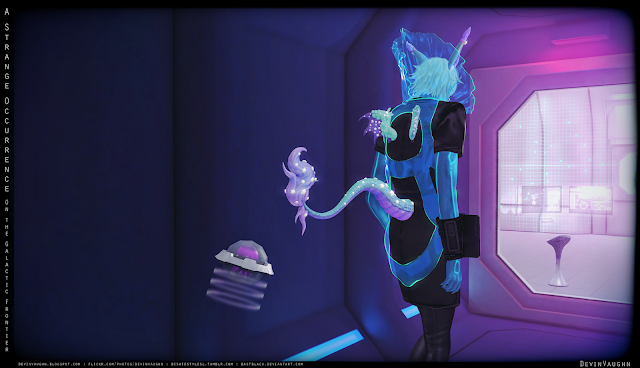 (click to enlarge)
STORYLINE: Oucei lived alone in a guardpost on the outer rim of the galaxy. His only companion was his pet jellyfish Twinkles. Sometimes when staring into the stark black sky, Oucei wondered how his color changing pet felt about being enclosed in a glass bubble for years. Sure, Twinkles could steer his bubble around, but wouldn't he rather swim freely in the gentle glowing waves of his home spawning waters? That sounded nice, Oucei sighed. He missed the sound of water the most. Nothing exciting happened on this distant lifeless moon. But he had no sooner wished for drama when suddenly he was jarred by screeching alarm sirens.

The Multiverse is an Sci-Fi events for all the avatars of Second Life whether their idea of Sci-Fi is space opera, cyberpunk, retro scifi, or dystopian, there's something for everyone. This year's event is organized by Mirajai Maven of BluPrintz, and landscaped by sohma Dix of Papermoon. You can see shopping guide of all the awesome goodies at the event on the blog: Multiverse Shopping Guide and even more pictures at the flickr: Multiverse Flickr group

Shown above are the futuristic Medusa Collar, Olympus tee and vest by Titzuki. The tee comes in black, blue, lilac, nude or white with fits for male, female, and even femboy! The collar and the vest are semi transparent with a glowing edge like fiber optics. It comes in 5 choices, and the fatpack include bonus colors. By Anachron is the DataBracer Wrist Mounted Server. When worn it triggers a pose for looking at the popup display. You can get it in white, black, grey, pink, hacker, or kawaii texture themes. The hud will can change the animated computer display screens, trigger poses for popping open and looking at the screen, typing, and also to change the color of the display. The pet jellyfish ufo is from the BluPrintz Humanitys Arc gacha. He slowly changes color over time. Touch it and a little jet effect will trigger. Also from the Humanity Arc gacha, is the Ark Computer in the background. Behind that is the Star Chart by BluePrintz. It can be worn on the wrist to rezzed for decor. From We <3 Roleplay is the wonderful Hand Stitched Leather Leggings by Lassitude & ennui. It looks like mesh clothing but is actually an applier. Clever. it works perfectly with the outfit.  From DarkendStare are 3 fun pieces for my alien boy from the Celestial Dragon gacha. The very cool glowing tattoo is the Water Golem by Fallen Gods, on the Pure Water skin also by Fallen Gods. Finishing Oucei's look is the Nekoto hair by Ayashi pastels pack with the perfect green color. The hud includes option to show or hide the nekp ears. You guys like this setting? The good news is its a group grift by Isil! Just go to the mainstore and join the group to get this amazing lunar skybox home.

Posted by Devin Vaughn at 3:19 PM No comments:

The Multiverse portal to the future has opened! 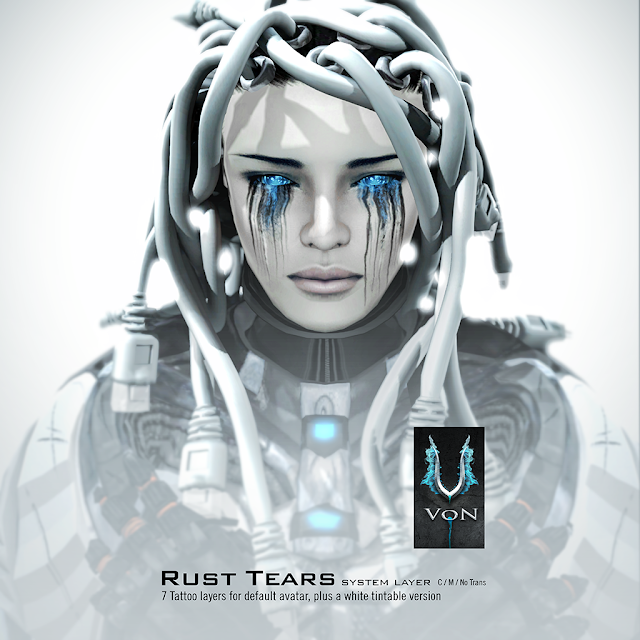 PRODUCT CONCEPT: Discarded and obsolete, the Android waits to be slowly dissembled for his parts. Do humans know Androids can cry too?

Introducing two brand new cool things for SL: The Multiverse event for Scifi in Secondlife, and my own store VoN which has debuted at Multiverse. Multiverse is an Sci-Fi events for all the avatars of Second Life whether their idea of Sci-Fi is Light Sabers, Isaac Asimov’s “Three Laws of Robotics”, Genetic Splicing, or a grim dystopia future. So long as it is sci-fi you will find it at MV. The event is organized by Mirajai Maven of the store BluPrintz. You can see shopping guide of all the awesome goodies at the event on the blog: Multiverse Shopping Guide  You can look at all cool images from the blogger wizards at Multiverse! Multiverse Flickr And here is the Surl to the event: The Multiverse.

Shown above are the Rust Tears tattoos by VoN. They are 7 different designs for the classic avatar with 2 options: Textured, and a tintable white version. You can mix and match them for cool effects and tint them any wild color you want! (Mesh head appliers will be released in the near future.)

Posted by Devin Vaughn at 1:28 AM No comments: