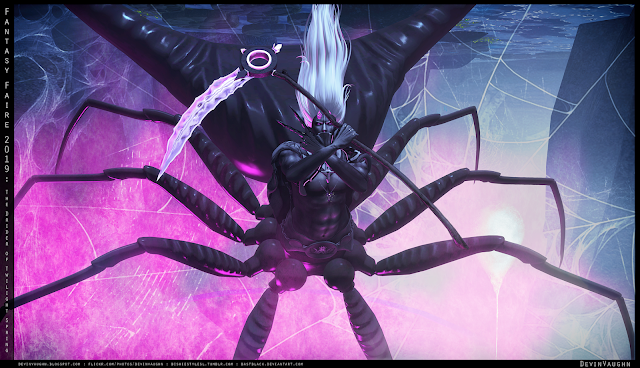 (click to enlarge)
STORYLINE: Unseen high above the heads of many faire folk, in a place where dark caves part to roaring falls, hangs the stealthiest of the Faireland's guardians, The Drider of Twilight Spring. To him, the Unweaver is the epitome of evil. The Drider spends his entire life spinning beautiful webs of art, war, and intel. The opposite of him is the Unwearver who unravels life. And so the Drider swore an oath to cut down this villain if it is ever foolish enough to enter his caverns.

The Fantasy Faire is still going on and smashing records of fund raising for Relay for Life.
The Fairelands are open until May 5th.
The Quest game has began, and there is even a freebie Part 2 for you to enjoy. (Part 2 is open until May 8th) Don't miss it!
For more information on the Fantasy Faire, head to: https://fantasyfairesl.wordpress.com/

For a handy shopping guide of all donation items with links and pictures, go to:

Posted by Devin Vaughn at 3:21 AM No comments: