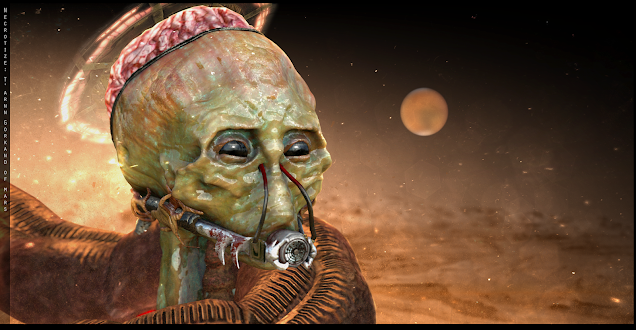 (click to enlarge)
STORYLINE: Long after humans left the Earth and modified their bodies to adapt to living in the harsh conditions of Mars, a false prophet rose. The colonists had struggled to survive in the desolate wasteland for generations despite the steady support from Earth. The truth was, one small mistake and the colony could die. Few lived past 27. It was from this misery a myth was born that lifted the spirits of the Martians. A story about ancient aliens who lived on Mars when water still flowed. It was during this time T'arnn Gorkand became the first Emperor of Mars. He told them he had received a vision from these Ancient Astronauts. They showed him the location of their ancient capital city buried under a large pyramid, and he promised to lead true believers to this paradise if they swore allegiance to him.

Is this mesh head by Badwolf cool or what? It inspired this Mars fantasy themed post. The head comes with a Hud to switch out the skin textures. You can also edit-mod to hide the exposed brain if you want to wear a hat or hair. The scarf is a creepy attachable Animesh Void Worm. Head over for the last call at Necrotize to pick up goodies and gifts. Stay safe everyone for the holidays!

Necrotize: The Dance of Death 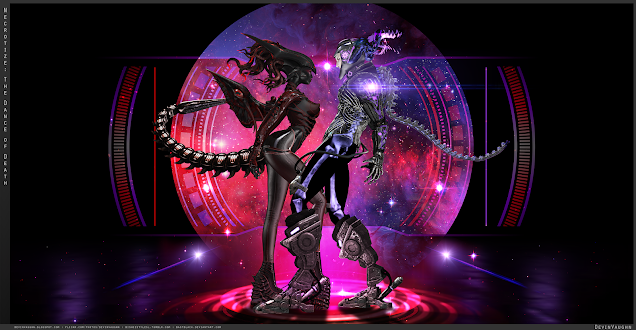 (click to enlarge)
STORYLINE: Astronaut Purple was dozing off at his post on the Coms. It was sterile and empty in space. He missed strange things like bugs. He smiled thinking of his lazy summer childhood days back on Earth. When he stepped outside, insects would fly away. Living things were everywhere. His mind drifted to sinister buzz of the bug-zapper on his father’s back porch. And then, it turned into the hum of the spaceship. His eyes snapped open. He was not alone. That’s when he noticed a strange dark figure in the security cameras. Was he hallucinating? He rubbed his eyes and looked again. It was gone. Probably nothing. He sighed. Nothing exciting ever happened here. Suddenly the door hissed open. Standing there was a beautiful, deadly, and strangely seductive alien. He jumped from his chair, knocking it over, his heart racing. She moved towards him in an erotic motion, inviting him to a dance. He felt like moth to her flame. Its a dream, right? She touched his leg, and electric shock jolted up and down his body. He could see his own bones glow inside his legs. The zap boomed in his head, it was deafening. He felt like he was falling. Like a unexpected power outage, everything flickered to darkness. ... Surely this was a dream.
This image originally was inspired by Fantastical Notion's First Emissary avatar. It was unusual and interesting, and it grew into a ghost Astronaut. Then it took a twist into a deadly galactic dance between a Xenomorph and Astronaut. I couldn't find a location that worked for this image, so I switched to creating a background. More items shown on the "Ghostnaut" are the Val'More Machina legs. They are not rigged so I posed them for this image. For the face is the Conviction Mutant eyes, and TF mort veins. Contraption put two excellent items on discount at the event, animesh Powerjammer spine, and Grymmer vest. On a side note, The X-ray effect I created by breaking apart the Cureless Skeleton and adding props to spine, ribcage, and legs, and using the Body Outline by Euthanasia. On the Zenomorph is the awesome shiny and scary NCHRGX outfit by Human Glitch. The freaky demonic wings are by DarkendStare's R'Lyeh. The dark skin by Petrichor has cool details like red spots, I especially loves the spots around the ears, I have never seen that before. The super shiny & bumpy detail on the skin is the material shine by This Is Wrong. Her cyber eyes and glossy lips are by Suicidal Unborn.
Necrotize will be ending soon. All lovers of cyber, horror, and scifi be sure to not miss it. The setting for the event is SUPER cool, created in collboration by Contraption and CerberusXing. So many great items are there to inspire your cyber nights. Your handy guide here: https://secondlifesyndicate.com/events/syndicate-events/necrotize/
On him, the Ghostnaut:
Helmet, horns: Fantastical Notion Hands of the First Emissary [mesh](Necrotize)(900L)
Boots: Val'More Prototype - Machina Legs [mesh](Necrotize)(320L)
Eyes: Conviction Mutant Eyes Purple [mesh](Necrotize)(560L)
Makeup: TF Mort Veins [BOM](Necrotize)(275L)
Skeleton: Cureless Skeletal System Noir [mesh](249L)
Arms: Contraption SP1NDL Prosthetic arm [mesh](500L)
Chest: Contraption The Grymmer Vest [mesh](Necrotize)(350L)
Animesh: Contraption Power Jammer Spine [mesh](Necrotize)(375L)
Pants: Gabriel ::GB::Cyber Elysion Pants Belleza Silver, gacha [mesh](75L)
Skin: Tableau Vivant Noctis skin - Tone 01 [BOM]
Mesh head: Raven Bell  BJD Bento Head James // OMEGA-UV [mesh] (2000L)
Body: Euthanasia Signature Outline [mesh](250L)
Pose: Del May DM - Yin Yang (150L)
On her, Xenomorph Female:
Skin: Petrichor :[P]:- Shadowlaz Femme Skin Sanguinna [mesh](Necrotize)(1149L)
Outfit: Human Glitch NCHRGX Bordo [mesh](Necrotize)(299L)
Boots: Human Glitch NCHRGX Boots [mesh](Necrotize)(399L)
Wings: darkendStare R'lyeh Wings [Black Blood] Right [mesh](Necrotize)(349L)
Helmet: ANA Trap Nova Helm Black [mesh](100L)
Claws: CerberusXing [CX] Salient Talons - Onyx BENTO (277L)
Tail: CerberusXing [CX] XenoPlug - Black [mesh](500L)
Materials: THIS IS WRONG Corrputed shine 3D (Necrotize)(399L)
Lips: Suicidal Unborn -SU!- Cyber Necromancer Lip Gloss -Genus- (Necrotize)(350L)
Eyes: Suicidal Unborn -SU!- Cyber Eyes -NECRO 3000X (Necrotize)(299L)
Head: GENUS Project Genus Head Strong Face GIFT001 v1.7 Mocap [mesh](group gift)
Body: Maitreya Mesh Body Lara [BOM] [mesh](2750L)
Stock:
Nebula: uxmal750ad Nebula Stock Image 2
Stars: NASA Hubble Space Telescope gallery 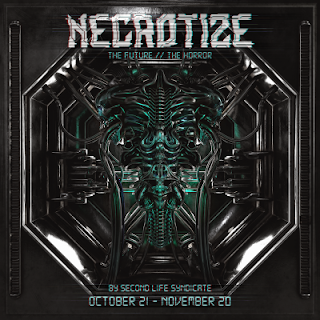 Posted by Devin Vaughn at 5:15 PM No comments: