Origami: The Ghosts of August 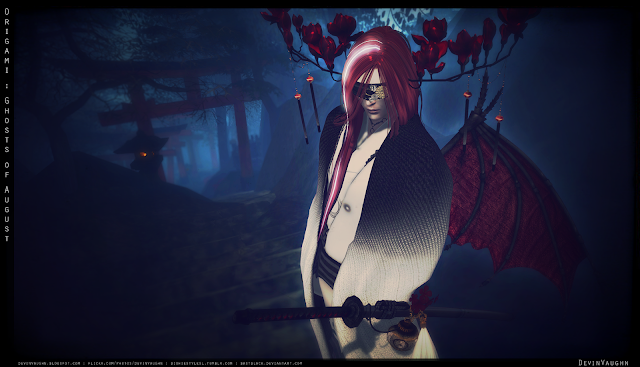 (click to enlarge)
STORYLINE: Like a firefly flickering in the still night air, The Wasp waited to sting. The sacred jars connecting the worlds of the living and the dead had been unsealed. Unholy specters were invading the Temple of Magnolia Mound. Like a flash of lightning, he struck, his enchanted blade dispatching the ghosts back to the netherworld.

One of the best events of the year, Origami RIN-NE is not to be missed! The Origami shopping event of traditional Japanese items has teamed up with the talented folks behind last year's horror adventure, Kagami. The sims are decorated full of spooky cool ambience and jumpscares. As you investigate the disappearance of a young girl, you will travel throughout a town being overrun by spirits. The story is based on the Yamata no Orochi myth. Be sure to look for the gold coins as you explore, they give fabulous prizes! (TIP: As you get near a coin you need, it will turn the RIN-NE red on your hud. Pretty cool trick!) For more details on the event go to here: Origami Event: RIN-NE, for intructions on how to play, go here: Origami RIN-NE: Help Page The last day is August 25. Thank you all who put so much love, detail, and creativity in this event. I love it! Well done!

Pictured above is the new Electric-rain hair by A&Y Cyberbunker. It took many snapshots to catch it in a full streak of glowly wonderfulness, but I think you get the idea. It's flickers and lights up. The hair comes with a hud to change the hair texture and color of the glow. It comes in male and female. From Origami is the AIR Shana blindfold. It's non-rigged mesh you can adjust to fit your face, and comes in black, red, purple, and blue. Also by Air is the wonderful hunt prize Magnolia anthers. By c*C*c is the LIN White yukata with a black and white chrysanthemum pattern. Over the top is the Fringed Knitted Cape Ombre by C L A Vv. (The kimono doesn't fit perfectly under the shawl, only in poses with the arms close to the body, but it looks very cool together!) By Souzou Eien are the Draconian Wings on sale at We <3 Role Play. They can be resized up and down and come with a hud to change the texture colors. From Classically Kinky is the Chained Collar by Souzou Eien. They also have a hud to change the colors, and are resizable. My katana by Remarkable Oblivion was a limited release, no longer available. Skin by Kooqla, and pose by momomuller / 3M.

Posted by Devin Vaughn at 3:00 PM No comments: 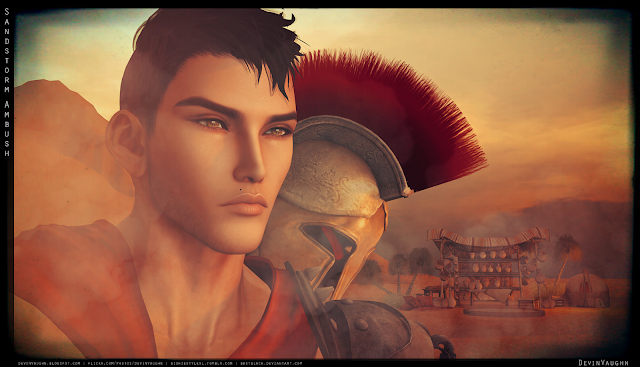 (click to enlarge)
STORYLINE: Flamma was a legend in Rome. Originally a captured soldier from Syria, he was given a choice: be a slave and fight in the coliseum, or be free and executed. The Flame had a taste for battle. He fought 34 times and won all but 4 matches in a draw. The highest honor a gladiator can achieve is their freedom. He had won it long ago, but choose to keep fighting.

Did you guys give a nice Roman Thumbs-Up for the Secret Affair's Gladiator round?  Yes, yes, so much excellence. Shown above to the right is the Stony Hollow Potter's Tent by Artisan Fantasy. It's a gacha set with 10 pieces. The Pony Palms are by The Little Branch. The Persian sit pillows are by Zerkalo, 2li and Dance Pit comes in adult and pg, 3li.   Flamma is wearing a brand new Kat skin by Tableau Vivant on sale for 300L at The Men's Department. The nice bold eyebrows looks great on the Mesh Project head! Also by Tableau Vivant is the facial stubble, and the Unkempt Hair on sale at Shiny Shabby. It worked pretty good for a Roman look combined with the hairbase by Unorthodox. The gold eyes are by Ikon. Hoplite cape by Pucca Firecaster. The Roman Helmet by Death Row. 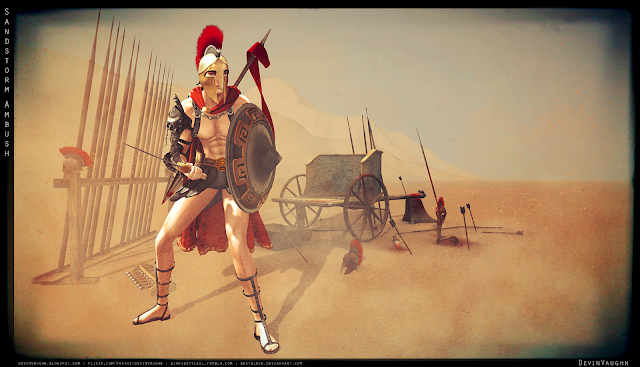 (click to enlarge)
STORYLINE: The senate was testing Caesar's patience. He commanded the ringleader of the troublemakers, Marcus Vinicius, to leave immediately on an "important" diplomatic trip to Egypt. The ornery senator refused to go unless his favorite gladiator, Flamma, served as his personal guard. Neither the stubborn senator, or the famed gladiator suspected the Emperor was sending them into a trap.

I love these armors by Lab737. I used it for my gladitor but it can easily work on post apocalyptic too! They are mod so edited them to fit on the Niramyth upper body. Yes, I did a frankenbody, but that was because of the various fits to each piece. It actually came together reasonably well, but it's not perfect, there is a slight gap where TMP body meets the Slink foot, and the Niramyth neck with the TMP head. But hey, I'm happy I could pull this off! The Roman Sandals by Death Row are sized to fit slink. The Roman Bottom by The Body Factory had no problem fitting the seam at the TMP lower and Niramyth upper. The Laus Store gacha hip armor is mod so I sized it to fit. The PFC Hoplite cape I need to rez on the ground because it bent oddly when worn in this pose. By the way, I made that pose for this post. It's been a long time, I'm a little rusty. I want to give a big thanks to Zee, of store Oxi, for making a Gladius sword for me for this post. Thanks Zee! The spear staff and shield are by May Soul. The spear and dagger racks are by Death Row. The Chariot, also by Death Row, comes in clean and bloody, pg and adult poses. Veni, vidi, vici!

Posted by Devin Vaughn at 1:52 PM No comments: