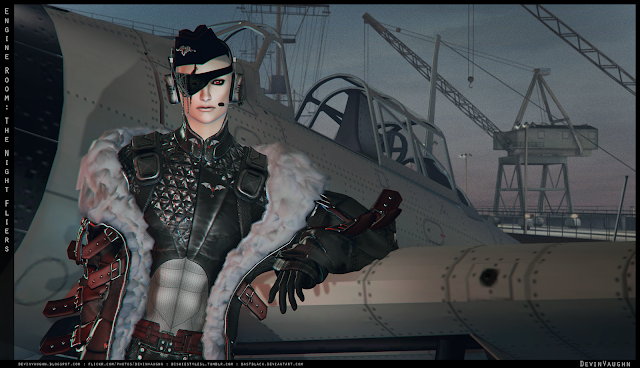 (Click to enlarge)
STORYLINE: It was risky flying night time bombing runs over Berlin. Sure, the cover of night would protect the bombers but the bombs rarely landed on their intended industrial targets. Faced with this problem, Winston Churchill had an idea. He called the leader of his secret new ally for help, the Children of the Night. This is how the Crimson Bat rose to fame in the newly formed Vampire Nation. He had been a smuggler working in the Pacific with a stolen Zero, and now he was the leader of the Night Fliers, the fighter escort for the nocturnal Allied bombing raids.

This post was inspired by the Deiselpunk elements at the 2nd round of the Engine Room. This round is even larger than the first, and stuffed with amazing and creative quality items. Don’t miss it! The hat by Ungod comes in brown or black, with wrench emblem or not. The Bomber jacket by Krankhaus has fits for major bodies in both mainstream and anime styles. It has a hud to change the change the textures of many separate texture zones. To add a little more of a vampire twist to the outfit, I used the bat barrettes by Cae and earring by Supernatural like medals for a vampire airman. Lol The eyepatch is from the Military Girl gacha by Silvery K. The pants are a gacha from Riot, Bird of Prey. I wanted a unform looking top to go under the jacket, and found a great solution in the Perseo Space suit by L’Emporio&SL. Adding a bit more DieselPunk elements are the headphone by the forge and belt by Deathrow. The Gloves are by Contraption, and undersuit by Blue Falcon Industries. I had a very hard time finding a plane, thats how I ended up with a Zero instead of a B-17 Flying Fortress. HaroMotors has a lovely Zero with well made insides and outsides, and a very hud with many capabilities.

MAY 4 UPDATE: After a week of waiting, a dead monitor was confirmed to be problem. However the replacement monitor is defective. A new new-monitor will arrive May 13th. Meanwhile, here is my attempt to power-on despite the woe... Enjoy some DeiselPunk from the Engine Room! Its Half-time now, with new releases and gifts! 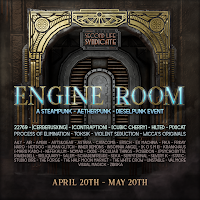 Posted by Devin Vaughn at 10:03 AM No comments: 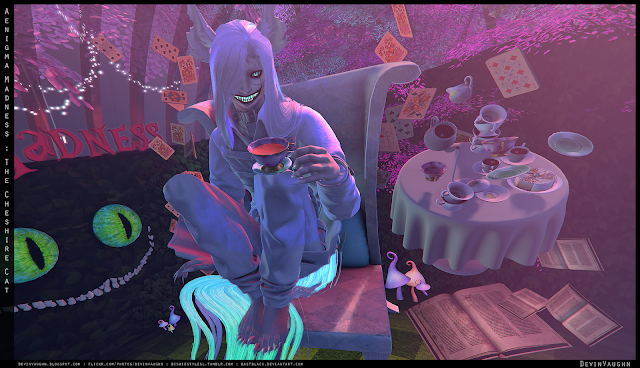 (Click to enlarge)
STORYLINE: Alice: "Would you tell me, please, which way I ought to go from here?"  Cheshire: "That depends a good deal on where you want to get to." Alice: "I don't much care where."  Cheshire: "Then it doesn't matter which way you go." - Alice in Wonderland, Lewis Carroll

The Cheshire Cat in the The Bearded Guy's backdrop inspired this image along with the Tea Party Bento pose chair and table by Wet Cat. In the background, are the Whimsical mushrooms by Celeste. All times from the Madness round of Aenigma.  Over at Neo-Japan, is this awesome SUPER LONG hair by Raven Bell. It looks amazing. There 2 texture zones, inside and outside. And since it's mod, you can add a fun glow to the inside like I did here. The hair comes in fits for women, and fits for men. As you can see above, it can even tuck under you when you are sitting. I think I will be wearing it to death along with the L'Emporio&PL vampires claws. I loved them so much, I got matching Damned Claws for the feet.

Posted by Devin Vaughn at 12:08 AM No comments:

Aenigma (Madness) : Off with their heads! 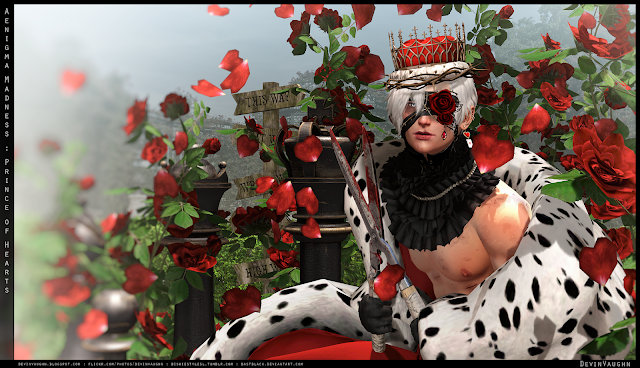 (click to enlarge)
STORYLINE: The Prince of Hearts was furious with his mother. The Queen never listened to him. He warned her there was a swarm of Jabberwocks coming to infest Wonderland. He offered simple solutions to deal with the problem, but she refused to listen to him. She cared more about her popularity with the card soldiers, or how many heart-shaped rubies she amassed. He accused her in front of the entire court of being blind. For his crime, she had his left eye plucked out. In a fit of madness, he took out his wrath on her prized roses.

I know these times are tough during the pandemic for everyone. It seems odd to return into SL and try to refocus, but here you go! The image above is inspired by Alice in Wonderland, the Shears, and Rose Blindfold at Aenigma (Madness). I used the Animesh shears by Maru Kado. They can be worn to trigger the animation, or used as a prop. It has singles poses and multiple texture options. Matching the shears, is a scraps tattoo texture by The White Crow for face and body, in light and dark, and also lips only. The Blindfold is the next of Silvery K's Cursed Rose line. You can buy it several headband colors, and each comes with a hud to change the textures of vine, rose, and metal.

Posted by Devin Vaughn at 8:20 AM No comments: