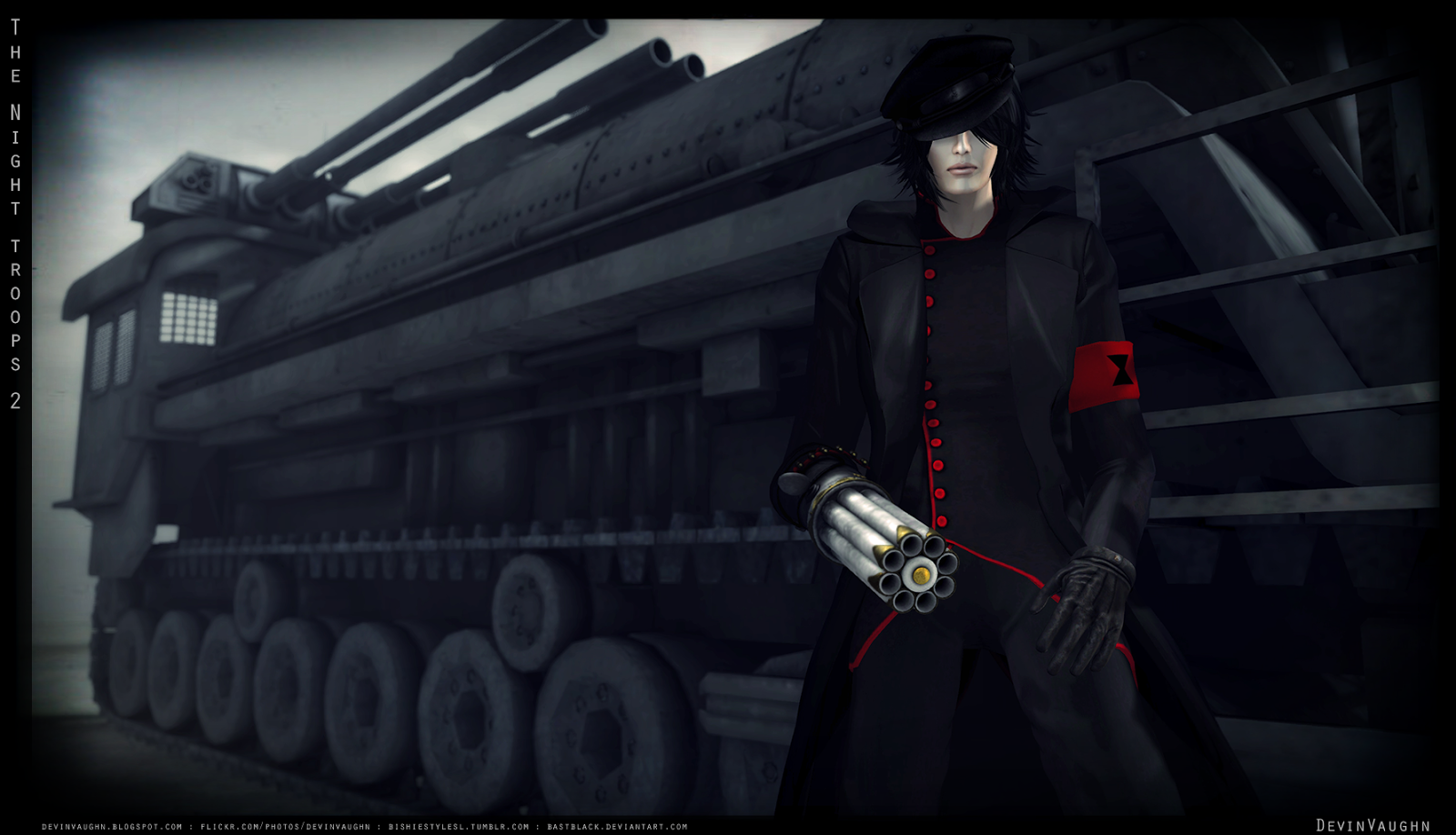 (click to enlarge)
STORYLINE: As the world hurled towards war, even the winds of change reached Vampire Society. Nobel Elder Maximilian Spyder plotted to overthrow his rival Horemheb. It was long past time to lead his people out of darkness. It took many hours at the negotiation table, but he finally signed a secret pack with the desperate Winston Churchill. The Army of the Night would protect England from a ground invasion, and the vanguard of the Night Troops would take out the Führer himself. In exchange, the Vampire Nation would be recognized as a sovereign entity by all Allied Nations. At last, they would have their own country. It was a dream about to be realized, and they would call their new capital city Cursed.

Today is my birthday, gang! Woo! I will tell you a secret, I don't watch much television but when I do it's usually World War 2 stuff. Recently I listened to Cursed Event's Axi Kurmin give a lecture on DieselPunk style. I was drooling so hard, and feeling inspired. I was jumping up and down when Cursed Event's Lokii Violet made the Clockwork Spiral sim DieselPunk. Each year this event steps up it game and challenges designers and shoppers to think outside of the box. A Clockwork Spiral also covers SteamPunk, and Dark Victorian. Money raised goes to the National Kidney Foundation. You can read more about the event, and get a sim map here: A Clockwork Spiral blog Event runs until Oct 1st.

DieselPunk is a fantasy military style with elements of both world wars. It invents fanciful new machines. The Train Tank behind me by Kalopsia is a good example, a combination of tank and train. I love this TankTrain! I wear it like a pet! People give me compliments on it, well from those that I didn't flatten with it. lol You can pick it up at Uber. My other toy is the Souzou Eien Hand Gun available at a Clockwork Spiral. It comes with left and right hands. You can edit the size and tint it. Great fantasy weapon. The jacket and pants I am wearing are a new release WASD by VRSION. It has the theme of Little Red Ridding Hood and the Big Bad Wolf, however this coat fits perfectly for an American military uniform with a vampire twist. It's fitted mesh too. The officer cap is by Death Row. The front plate can texture change a message, I picked a simple skull and cross bones. The black and red trimmed tunic is by Songbird at Clockwork Spiral. The donation item includes several colors. The Epia armband is something I have blogged a lot on the Cursed storylines. It's just so handy, I love being able to upload my own logo to it or tint it's colors. 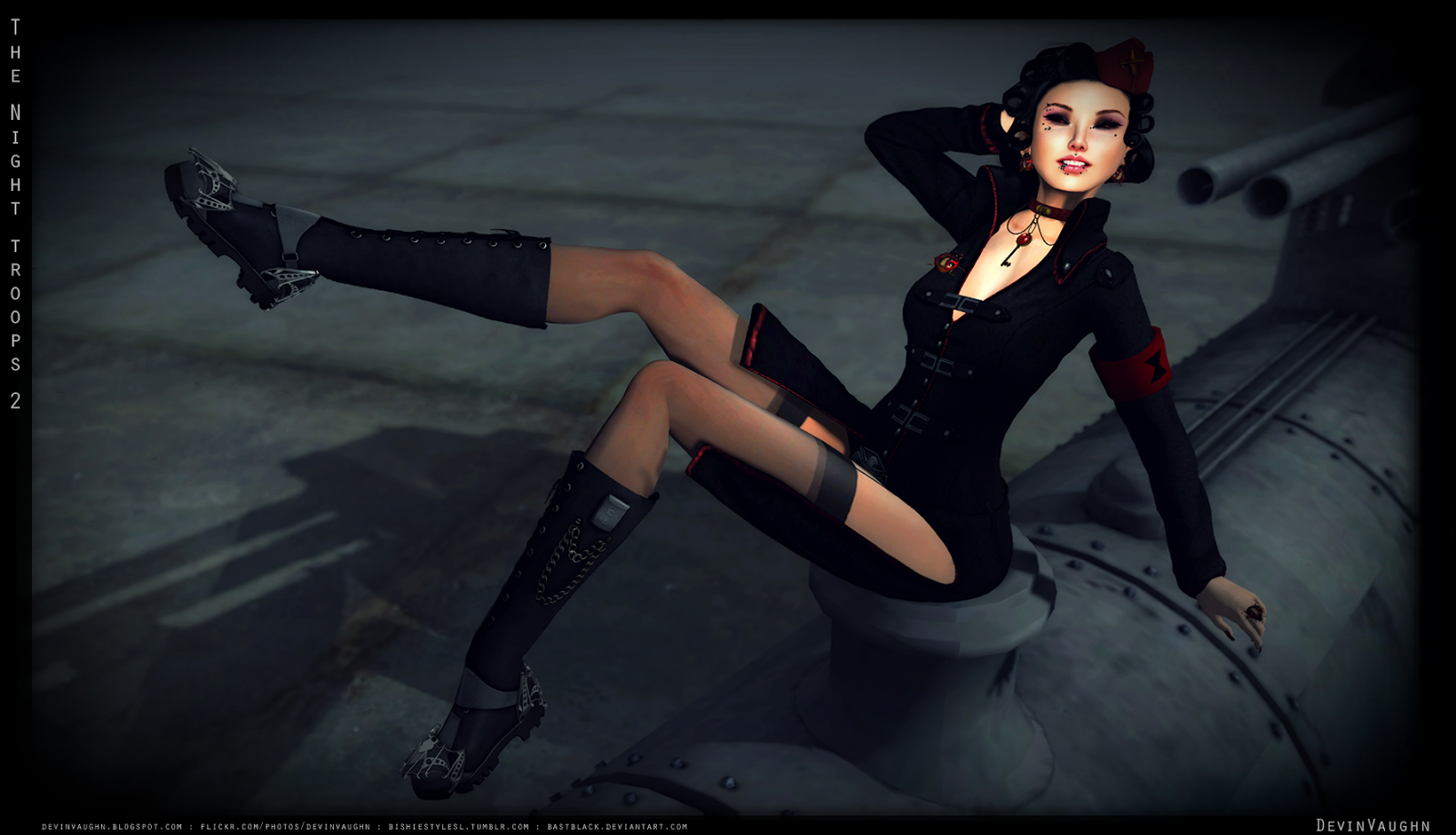 (click to enlarge)
STORYLINE: Many days passed as the Night Troops waited anxiously in their underground bunkers. At any moment they could get the signal to invade. To help rally the troops, Spyder's secret agent, vampire bombshell Lady Bug, posed provocatively on her big achievement, -- stealing the plans to the TrainTank.


Aayra returns to BishieStyleSL. You can see her post for the Clockwork Spiral here. I'm playing a robot for her, it's brilliant Fallen God's Oscar Avatar. She has a limited time to blog, but was a good sport to work with me on a style for this post and then allow me to log her account to photograph. I think the results are pretty cool. These boots, guys look how badass they are. House of Rain made DieselPunk boots with Art Deco boot jewelry Bats on them! They come in several colors so don't miss these! The boots are unisex, but I recommend smaller sized guys for them. Her a retro pinup hairdo is Bliensen + MaiTai's Diesel Hair. It comes in 3 different styles. It from last year, but I always loved it and wanted to blog it. I'm happy I got to show it this year. Also by Bliensen + MaiTai are the cute Aeropleustic Ladybug earrings, brooch, and ring. The Echelon Jacket is a perfect military vamp style by Senzafine. The chocker with key is by The Little Bat. ...Okay, you guys run go play at the Spiral!  I got some birthday cake to eat.