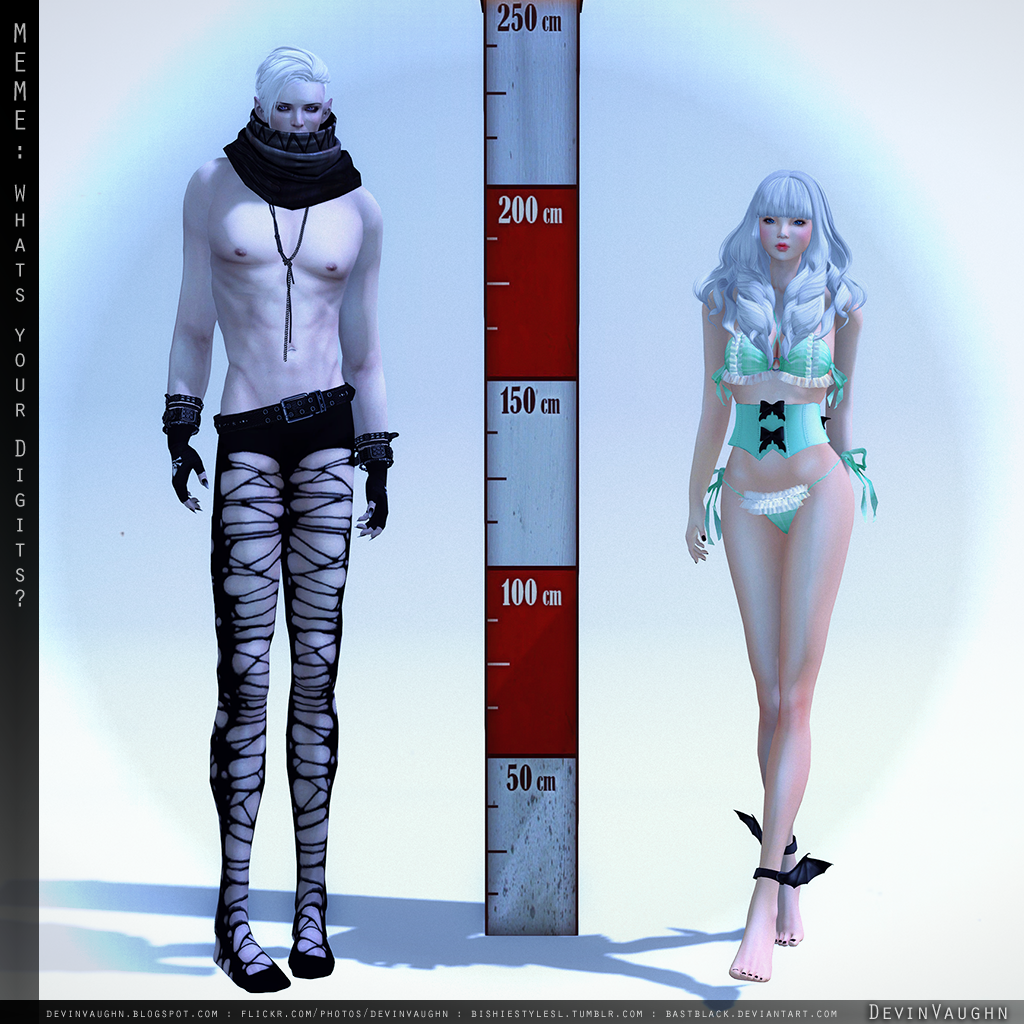 (click to enlarge)
Before I answer the Meme questions, I want to point out two great items for guys and girls at Dark Style Fair. The event ends June 7th so hurry over to pick up the goodies! The Compass Tech Muffler I am wearing from Contraption fits in a wonderfully mysterious way. It's perfect to hide behind when you've been sloppy in your feeding habits. Boowahahahaha. Little Lolita is modeling the fitted mesh Bat Corset from Violent Seduction. The corset has cute bat bows in the front and back. It comes in black, blue, candy, green, ice, lavender, leaf, mint, peach, purple, red, teal, or white and each color has it's own complete color change hud.


Each time Berry's What's your Digits Meme comes around I take the time to reevaluate my shapes. It's a good exercise to do, especially for tweaking proportions. This Meme helped create the standard sizes thanks to Wisdom of the Crowd averaging. Using the standards eliminated the quirks in my shapes mostly for the better, while I still maintain my ideal Bishonen proportions. ...Now I have a confession to make. I switch shape and even tweak shape for clothing, or pose, on almost every image I do. My digits can vary greatly so it doesn't make sense to list my digits ranges. But I can say this, my main avatar above, which I wear when I am not blogging, uses a standard size medium and clocks in between 7' 8" (234 cm) and 8' (244 cm). For the girls shown on the blog, I've taken over that duty from Fulli. She might be back in the future, but for now I'm carrying the load. My girl shapes are all over the map too as I hunt for the right tone. I'm still trying to find my way around the girl dials. lol Little Lolita above is becoming one of my favorites. She wears a size extra small and stands without heels at 6' 4" (193 cm). ...yeah, maybe not so little Lolita. lol  Just for comparison, here is what my guy and girl avatars looked like back in May of 2012.

Have you tried any of the new fitted mesh avatars released by Linden Lab? What do you think of them? What are your thoughts about Fitted mesh?

Yes, all the vampires series ones! They are fun, nicely made, and a joy to clown around in. The normal series avatars however are harder to love because the faces don't have expressions, or have eyes that blink and move. It puts me in the Uncanny Valley and it feels like wearing a costume rather than inhabiting an avatar. The vampire series doesn't have that problem because they aren't trying to be realistic, they are costumes.  Fitted mesh clothing is great when it's well crafted. It makes it possible to convert girl clothes to femboy on the female base (that means no breasts or wide hips, and broader shoulders). This is a tomboy shape with fitted mesh I did here.


1. Have you tried any fitted mesh avatars/bodies created by residents?

Yes. I tried the demos for 3rd party fitted mesh for girls. The WowMeh had been the front runner for the ladies, but it's currently being reviewed by Linden Labs and not for sale. The Fitted Mesh Body Warz are just beginning too, Slink and Belleza girls are rumored to be in development right now. Of all the currently released fitted mesh girl shapes, the one I like the best is Chip Midnight's CMFF girl. It's not a fetish shape, it's Girl Next Door, and it wears existing hair and mesh in standard sizes. You can choose to wear the head or not, and use premade alphas, or create your own with his applier app. Basically, it's built to be modded. It aims to eliminate the need for slink attachments. The feet work with a rotation for the different heel heights. And the good news is Chip will be releasing a fitted male avatar at some point. I'm sure it will come after most the bugs and issues are worked out on the female first. As far as fitted mesh for the guys, that's the only one I know of in development. There a several male mesh bodies, but they are currently not fitted mesh. p.s Utilizator's Kemono has just released, it's not fitted mesh but selling like hotcakes. It has a neko twist to his anime girl Avatar2 shape and M3 Head.

2. Have you tried a mesh head? What are your thoughts about mesh heads?

Yes. Because I don't think of any girl shapes as "me' I'm not bothered at all by wearing a female mesh head. I got the Slink Becky head for the expressions but I have a few problems with it. 1) I need an option either add an alpha to the eyelashes or turn them off for photography. It's brilliant the eyelashes can blink but also means the lashes need to be solid for mesh switching animation. Those solid mesh eyelashes tend to photograph poorly, so photo only option to hide them or add an alpha to them would be great. 2) The ear hole is too large. I would love to have mesh head without ears or holes where the ears were when I add a mesh ear attachment. 3) The teeth are beautiful but really darkly textured. 4) Emma won on the mesh head contest and most appliers work for her instead of Becky. So the Becky have tends to have the eyebrows too high for her face which creates a startled look. ...  I would love to see more expressive mesh heads. That's a key selling point to me. ... My favorite mesh head for girls is Nea by SnowRabbit. I just love seeing this pretty face inworld, in the blogs, or on flickr. It's brilliantly made and lifelike. She randomly smiles and blinks. There is zero Uncanny Valley about her. The only trade off is you lose your identify when you use a mesh head. You will look exactly like any other person using it. But there is another mesh head that DOES have slider adjustments! It's the new mesh head by Yabusaka. You adjust the sliders in an app, then have your custom mesh head uploaded to SL. You can play with Mesh Studio Head demo here. The new male demo version is here. As far as a mesh head for guys, my favorite by far is DollCoco Male. He doesn't have expressions but he's so nicely made. With some tweaks you can wear your own eyes with him, or even your own shape, but I recommend keeping your shape skinny to better match the head. My main avatar's old skin also matches DollCoco male perfectly.

3. Do you foresee a lot of changes to our current Second Life avatars because of fitted mesh?

Yes. We will eventually make the switch to amazingly well made fitted mesh avatars. Perhaps as soon as a year from now they will be the new standard in SL. Why? Because they are nicer looking, and it will make posing and photography so much better. But when it comes to mesh heads, people will be resistant because it's takes away their individuality. So that brings us right back to the serious need for Linden Labs to update the default avatar, because it's the only one with facial sliders and emotions. We can replace everything else with fitted mesh, but not the head. Really, it could be as simple as just converting the head to higher resolution quads, removing as many triangle poles as possible, and making new morphs for the sliders (that includes less cartoony emotes), and keeping the UV maps the same.