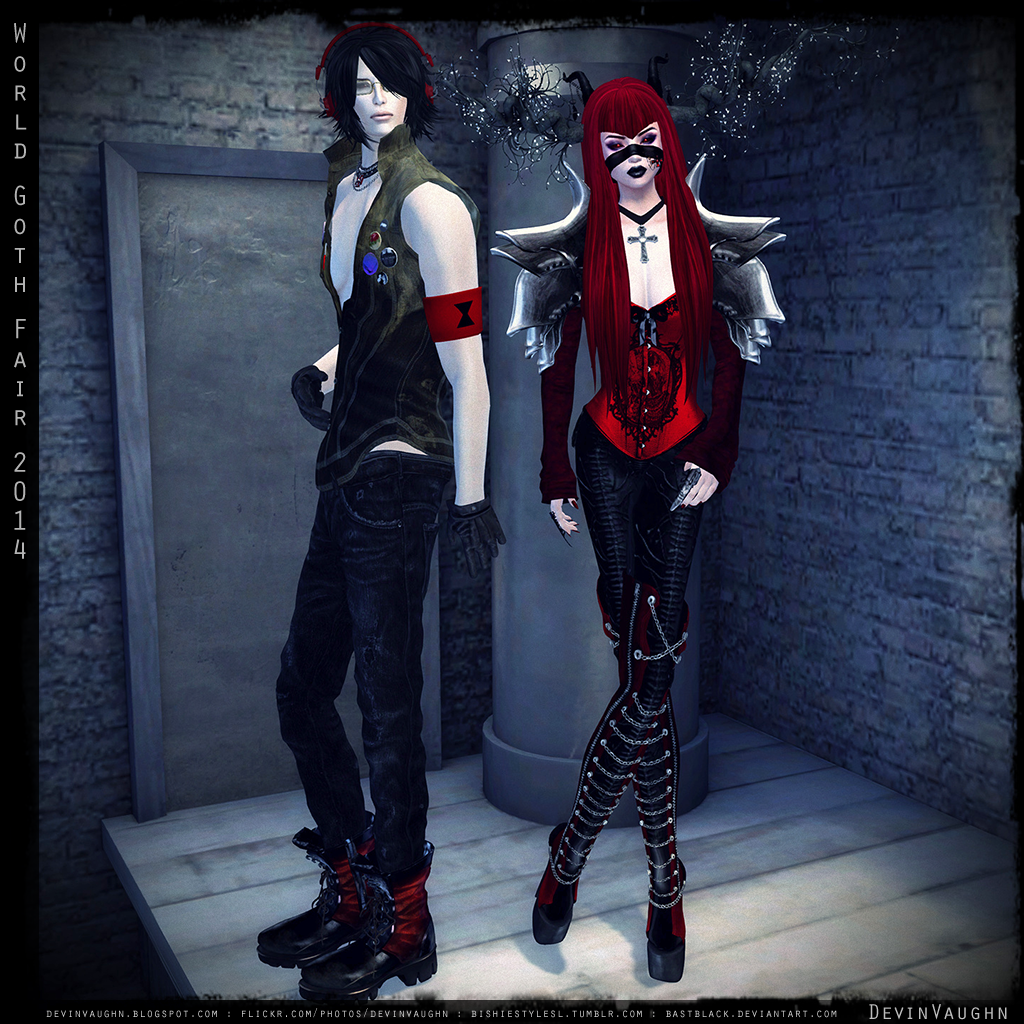 (click to enlarge)
STORYLINE: The leader of the Black Ops in Cursed was none other than Noble Elder Maximilian, the progenitor of the Spyder clan. The Spyders had their threads throughout the city, nothing happened without Maximilian's knowledge. The plain-clothes Spyders hidden in the crowd had taken Elizabeth to the safe place in the sky, the BatHouse of the 101st. While Maximilian personally escorted Scarlet there to meet with her sister. Maximilian was a mystery to most, but Scarlet understood his mind. He was all knowing and powerful but slow to act. She understood he choose his battles wisely. Taking on another ancient, Kaiser Kruel (also known as Horemheb), is nothing to take lightly, but some battles were worth fighting for. The separation of humans and Darks was wrong. Petty differences didn't matter, they were all family. it was time for a conversation, time for two sisters to finally embrace.

Wow I have a lot to cover here. First check out this wonderful retro-80s punk vest by Papermoon. I really love the attention to detail Papermoon does. The vest you can get in several different textures for girls or guys. Then you can pick out back patches for either punk, metal patches, or gothic. On the front buttons you can pick your music genre too. And here's the fun part, the patches and buttons are rigged, that means you can wear these fun button and patches on any outfit you like! Just add buttons to create an instant retro look! The shades by Eclectia I am wearing come with a hud to change to the textures on the frames and lens. I love the options on the lens that include shading up or down and shattered. For my Security look, I included the retro headphones from the Standby gacha, and the group gift armband from Epica (but added my own logo to it). The jeans are by favorites from Ronsem that include a speical closed boot fit version. The belt comes with a hud to change it's colors. The gloves are by O.M.E.N and comes with open and closed attachments. The Iron Cross necklace is another great item in the LNS booth at WGF. It comes with a resizer and bead color changers. While you're at LNS, be sure to pick up the free beautiful masks gift there!

Scarlet is rocking a lot of badass here. She is the leader of the Rebellion afterall, but she still has a tender heart. She's wearing the goregous corset by Couture Rock. I love how this corset fits around the waist and then opens up around the hips. There is a little black lace fringe too. The back has black ribbons. Her necklace is also by Couture Rock and matches perfectly. I didn't show it here, but there is a cameo stocking also at the CR booth that matches the corset, be sure to check that out too. The shoulder armor and finger armor are by Death Row and on sale only a few more days at We <3 Role Play. The Amor and ring also work on the guys. Scarlet's boots are wonderful chained open boot by Death Row availible at Dark Style Fair.  To wear these you need the Slink High foot. To go with it, I used the Gallactic Symbiosis pants with appliers for Slink feet. It comes with appliers for the hands too. I love this texture! So alien and organic like. The armwarmers are a return to Scarlets outfit from last year by Inkubus by SAKIDE. The 2nd fingerclaw is from LNS and you pick it up in several different colors. (All the girl vampires will definitely like this handy spiky thing. lol) Her nail polish is Dark Passion's Koffin nails Shades of Red. Scarlet's signature hairstyle is Ivy by Alice Project. Her blindfold has a little iron cross and safety pins created by Kio at Dark Style Fair, and her sleek black horns are Damned Princess by DirtyStories at Dark Style Fair. The wispy anthers are by Death Row at Suicide Dollz. They look really cool when you wear them, almost like little glittering lights the tiny white points in them. Scarlets skin is an exclusive by Jalwa at World Goth Fair. It's the Celine skin with lovely gothic purple makeup for eyes and lips. By the way, did you guys pick up all the little gifts throughout the three World Goth Fair sims? Be sure you get your free sunblock 1000 at Chaos, Panic, and Disorder before the summer gets here. lol