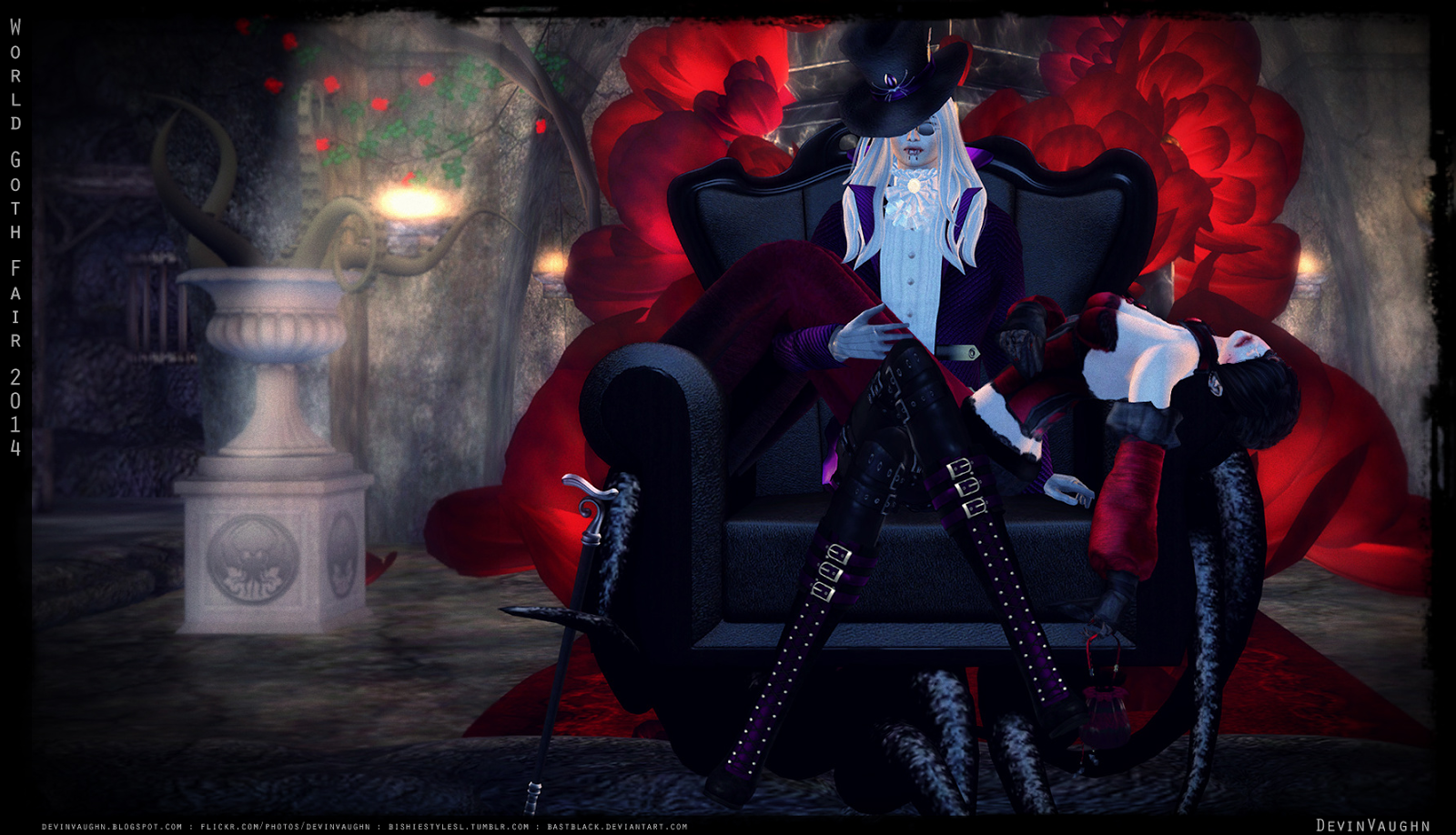 (click to enlarge)
STORYLINE: Not everyone loved the idea of humans and Darks intermingling for one day a year. The foremost critic of this new policy was none other than the creator of penal colony himself, Kaiser Kruel. Despite his protest, the event was moving forward so he sent out his righthand man to do his dirty work. Gin was delighted with the task. As fabulous as he looked, he was just as vicious. There was nothing Gin loved more than breaking wayward Darks who didn't appreciate the infinite wisdom of Kaiser Kruel.

Glamtastic Gin returns by request to rock fashions made for both guys and girls. The fun Madhatter hat with spider comes from Mitternacht outfit by the Avatar Bizarre. The jacket is Avatar Bizarre's Panzermensch. Gin is getting away with wearing the strappy pants for girls from Endorphin. And his boots are also for girls from the Little Bat's gacha Axi Boots. His Dracula half-rimmed glasses are by Eclectica. His fangs and fangs jewels are by [ni.Ju]. Gloves with materials by Fatewear. His favorite shirt is KC No.53 by Kyoko Couture, and skin Noctis by Tableau Vivant. His poor victim's style card is on the Dark Phantom blog post: The Crimson Ruler, but I can tell you her purse is Pipistrello by Bliensen + MaiTai with little bat charms on the string, and the pose I used for her comes the Gacha Pond Love Bites vampire poses by NanTra. (I won them all expect that elusive pose #2. *grumbles*) Now let's talk about this cool scenery! The lordly black Chtuluh chair is by bauwerk and comes with a collection of single poses. Behind the chair is a gigantic mesh black marble Oblodisk with red flowers. Love it! It comes with and without lighting,. To the side is the Cthulhu Urn by Nacht. For this picture, I used the Gentleman's Cane by Chaos, Panic and Disorder, but if you head over to the CPD booth at WGF you can pick up skull headed Ripper's Walking Stick.