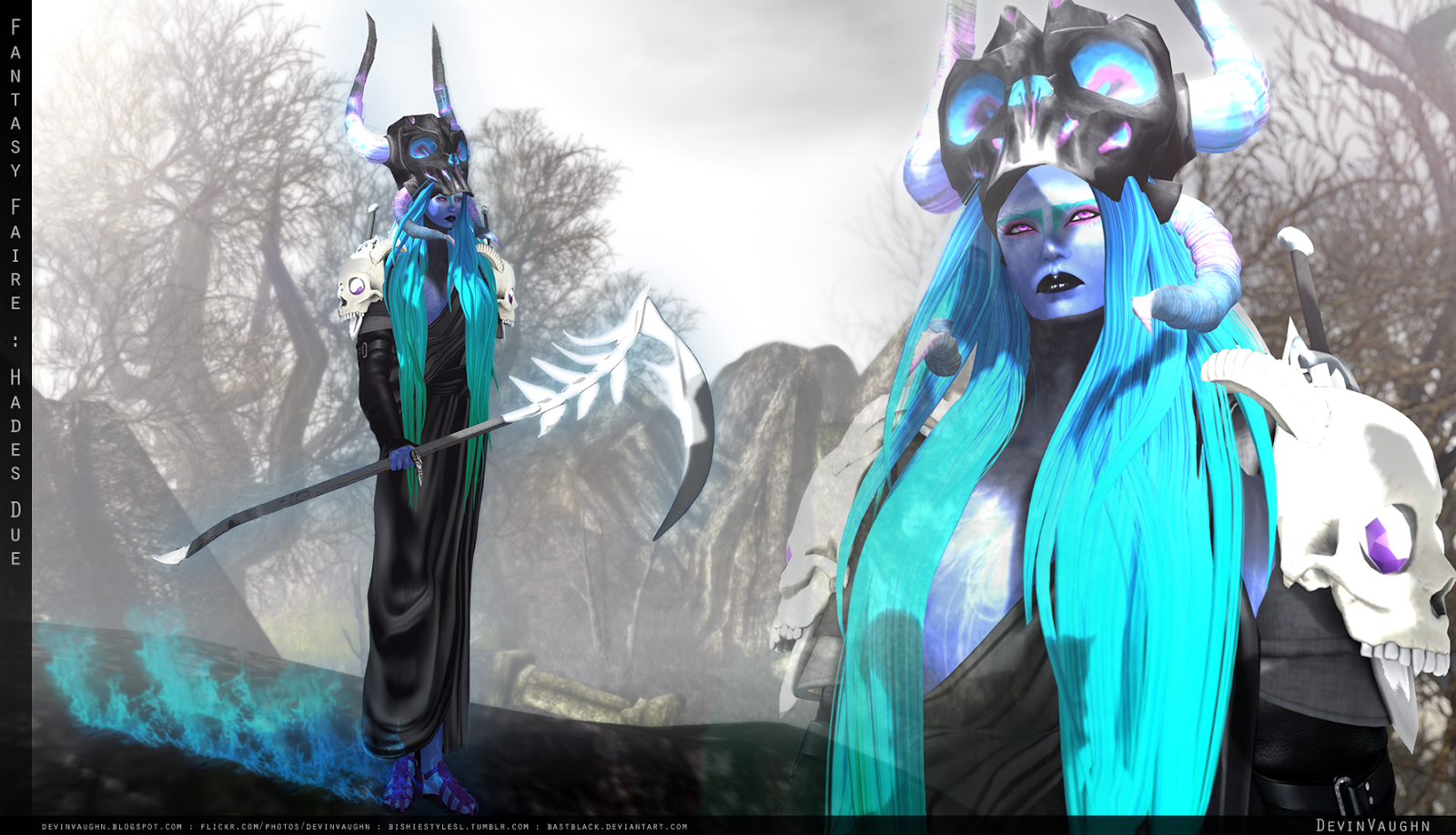 (click to enlarge)
STORYLINE: Hades, the God of the Underworld, was not amused. The souls of an entire city were suddenly wiped out. At first he was ecstatic since he wanted hear the newcomers' gory tales of their tragic demise. He waited anxiously. What caused so much death? He waited, and he waited. But not a single soul came. Engaged, he climbed up out the bowls of the earth to investigate this mystery. How dare they try to escape him! All souls eventually come to him, even the clueless! He would personally find each and everyone of them and drag their spirits back with him! ...However, there was a little problem with Hades' brash plan. You see, the God of Death was woefully unprepared for walking among the living.

WOW right now is a fantasy lover's paradise. The biggest fantasy event of the year has begun, the 6th Annual Fantasy Faire! Eleven gorgeous sims designed just for this event which only lasts 11 days. Run go now! Each sim is stuffed full of wonderful fantasy designers, and special event-only items you can purchase with proceeds donated directly to Relay for Life, the fundraising wing of the American Cancer Society. Each day there is a silent auction too. The Fantasy Faire Radio is rocking throughout the entire event with live DJs. There are even organized Role Plays going on! But if shopping, bidding, dancing, exploring, taking pictures, meeting people, and role playing isn't enough for you, I am especially delighted to tell you the Fantasy Faire HUNT is back! This year's hunt works similar's to last year's Key of Hope hunt. The hunt is released after the bidding reaches it's goal. Then part one will take you throughout all the sims hunting for clues. Part two will have you searching the Palace of Tears sim. Many prizes can be won and it's a lot of fun! Palace of Tears sim will stay open until May 18th. Cost 250L to get the hud for both legs of the hunt. There is only one Fantasy Faire, don't miss it!

From the event, I am wearing above this awesome Nefarious Skull mesh mask by Wilds of Organica, and the fun blue Frost Touched skin by Kishi Creations. Both items are 100% donations to Relay for Life. And now I will tell you about another event that just started, the Fantasy Gacha. Once more the Fantasy Gacha is loaded with fantastic things for the men! Of all the gachas, this is the one that drains my lindens like no other. lol This awesome long blue hair by Little Bones is actually for girls, but you know what, I love it. I don't care! *totally wears it* The skull shoulders are by NeverWish, and the Slink sandals for men are by Stitched. Also starting today is the May round of We <3 RolePlay. It's the 1st Anniversary of WLRP and I happy to tell you there is a lot of awesome of things for the guys. I went crazy for the Armor Fingerclaw by DeathRow. I have wanted something like that for soooo long. And it's only 70L. I will showing you more great things for the guys from WLRP in upcoming posts.