Gothmas: The Ghost of Jacob Marley 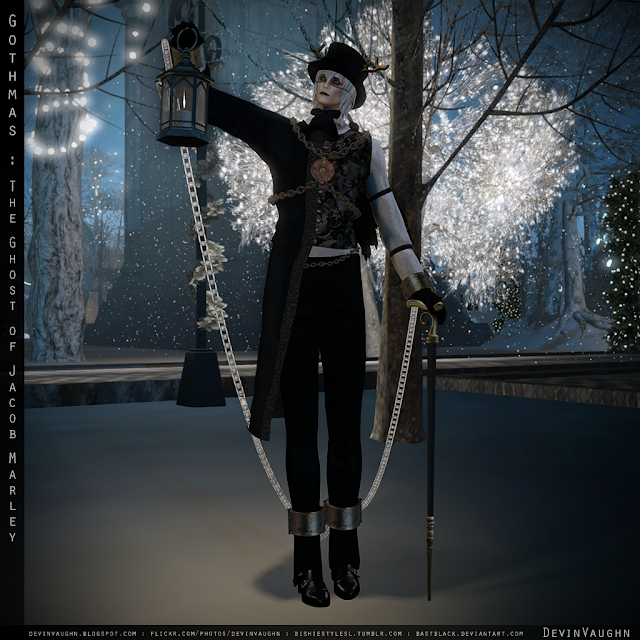 (click to enlarge)
STORYLINE: Christmas Eve 1836, Jacob Marley,  the wealthy banking partner of Ebenezer Scrooge, was rushing home ahead of a freak blizzard. A homeless man caught out in the open tried to flag him down for help. Rather than stop to give aid, Marley commanded the carriage onward. The desperate man made a sudden move to jump onto the back of the carriage. The horses were spooked, bolted wildly, and slipped on the ice. The carriage fell over London Bridge and crashed into the Thames river. Marley had no friends other than Scrooge. No one noticed he was missing Christmas Day. His body was later discovered entombed in the ice. Now his ghost is condemned forever to walk the Earth weighed down by the chains of selfishness and greed.

It's time to explore the darkside of the biggest holiday of the year with a dash of Victorian elegance, and wink at the wicked. The stellar World Goth Fair gang returns with another fantastic event Gothmas by Gaslight. It's 2 sims of gothic goodness: adult sim Cursed, and moderate sim Sium. Check out the giant list of participating stores: Gothmas Merchant List. Event runs until January 5th.

Now let me tell you a little more about this outfit. The chains and shackles are part of a slave silk set for men by Soedara on sale at We <3 Role Play. The chains that connect the wrists to the ankles are actually a particles effect and it works pretty good following your movements. The suit is all one piece in mesh by Fuubutsu Dou at Gothmas. It's a cool design of a half jacket half vest, with straps on the sleeve, and I love the Victorian style drape at the foot. The bowtie is a separate attachment. This sweet cane is in a gacha by Chaos, Panic, and Disorder and it's 25L a spin at Gothmas. The hair by Ayashi for men comes with cute antlers and you can get it at that RMK Frost Fair. Just click the vendor to scroll through the color packs. The hair is non rigged and can scale xyz. The lantern by LISP is really nice and comes with a pose. You can win it at the current round of The Arcade. The gold eyes are the current group gift at Ikon.

On Him, The Ghost of Jacob Marley: 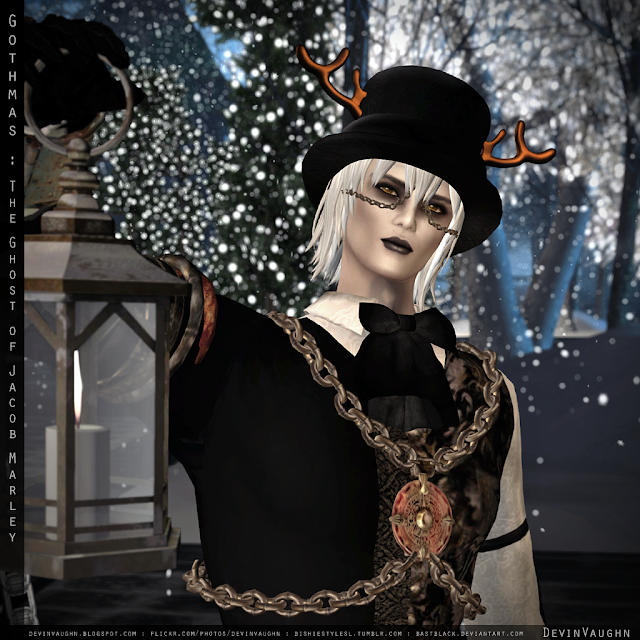