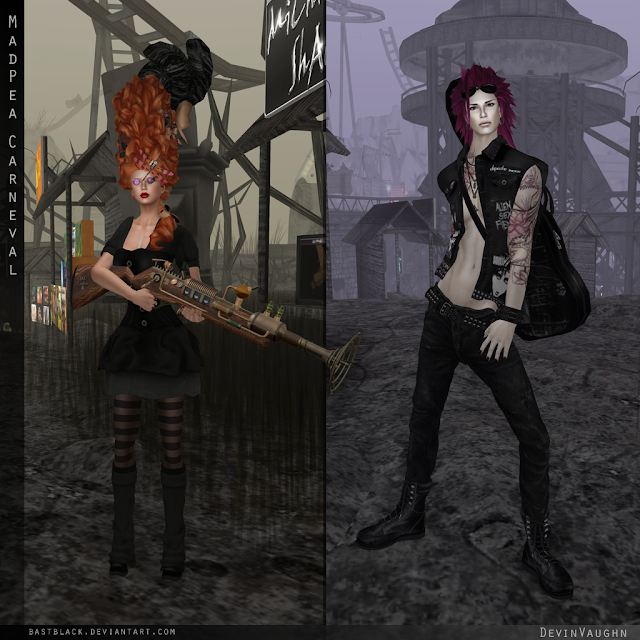 (click to enlarge)
Madness Fair at MadPea Carneval goes until April 27. Walk around the midway and scoop up some some nice deals. No item is priced over 150L. For instance, the Death Row rigged combat boot fatpack  normally sells for 1999L but you can snag it at the fair for 150L! Madness!

Participating stores in Madness Fair are:

Pictured on the left is a great new steampunk theme outfit and shoes for the ladies from Death Row which you can also get for 150L at Madness Fair. She is also showing off some great things from March Arcade round: Curio Obscura Rare Stackable hair and Contraption Tinkerer's Glasses, great Glam Affair skin Laurel, and the cool LWL electric dragonfly. But I know you all have a burning question, "Where can I get that awesome Steampunk rifle??!!!" It's a DZ-Gun. My favorite bullet shoots plasma, but it's also fun to trap your friends in a Tesla cages. lol The gun is beautifully made and comes with special bullets, smoke screens, push, orbit, nukes, you name it. Sweet Steamy Goodness.

On the right, I am wearing the denim jacket by Redrum from Madness Fair that has all the classic Goth bands I love. (Oh yes, I snagged it faster than you can say, "Bela Lugosi's Dead"). I am also wearing another great Madness Fair find, Rocker Dude Necklace by Chaos Panic and Disorder. The hair is from the 1st Act lucky boards, and I turned up the volume by tinting it for a more intense fuscia. Matching the hair is badass black and pink koi tattoo from the Pink Fusion hunt. The hunt ends April 20th. I am wearing my favorite jeans by Ronsem, and the shoes are rigged mesh boots by JilRoxy.
Posted by Devin Vaughn at 8:54 AM