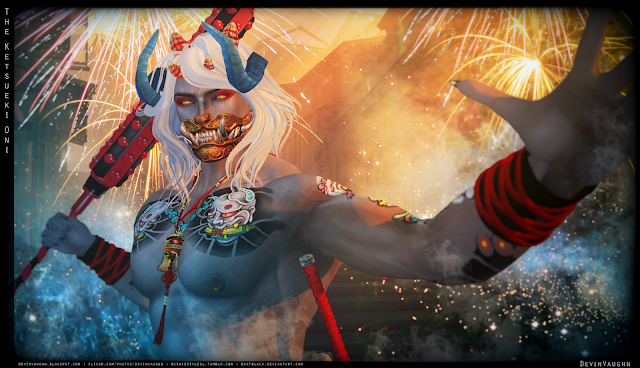 (click to enlarge)
STORYLINE: Suddenly the crowd of villagers gathered around the Hammer Game parted. The towering Ketsueki Oni stepped forward. In a deep intimidating voice he called out to the Kitsune Twins. "You two may have fooled all these feeble minded humans, but your tricks do not work on me." The Twins smiled, Surely the Ketsueki Oni would prove to be the strongest of all! Their Sensei would be so impressed by their plan. The Oni glared at them. "What is the fabulous prize you promise? There is nothing you trickers can offer that I would have. However, I will do your contest on one condition, the prize goes to the owner of this club," he pointed the tiny toy kanabo club at them. The Kitsune twins blinked. A child's toy? Surely this strong Oni wouldn't use something so ridiculous looking. But they shrugged it off. Their mission was only to find the strongest man of the village, it didn't matter to them who got the prize, or what tool was used. They agreed. Then with a mighty swing of the toy club, the Ketsueki Oni not only shot up the heavy fireball and sparked all the fireworks, he broke the game itself and the toy club.