Revenge of the SeaWitch, 2 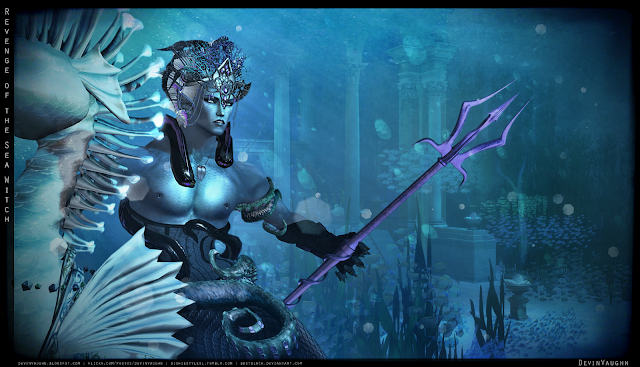 (click to enlarge)
STORYLINE: This is a special place. It belonged King Triton's youngest daughter. She was dear to me. To honor her memory I have kept this place exactly as it was. .... Her story began when an object from the world above fell at the entrance of her home. She was curious and wondered at it's purpose. Another object fell, and then another. Each object leading her further and further away. She realized they were falling from a ship above. She was forbidden to go to the surface, but it swam up to it anyway. She knew something was wrong. Her first sight at the surface was lightning streaking across an angry purple sky. She was terrified. The ship in the distance lurched wildly in the waves. A young man was swept overboard. His arms and legs were thrashing wildly. He was drowning. His panicked eyes locked on her, screaming at her to save him. A jolt raced up and down her spine. Her heart began race. He did not belong in her world, he could not breath in the water. He was dying. She had to help. She used all her strength to pull him up where he could breath air. She fought the waves until she came upon a sandy beach. A beautiful woman at the shoreline screamed and darted into the water towards them. The mermaid was scared of being beached on the land. She didn't belong there any more then young man belonged in the sea. She averted her eyes and handed the unconscious man to her and swam away as quickly as she could.

Enchantment's rebirth was a great success! I look forward to seeing what fairy tale will be in the next round. The Little Mermaid theme items are moving into their home mainstores locations. The mermaids have been such fun to spend time with, and I would like to continue this story. I hope you enjoy the journey. Shown above is the aisling Calypso headress that comes with a hud to change the textures and colors. Also, by aisling are the Caly's baby eels. They have a hud to hide left or right and change colors. The fun Gills on the neck and headfins are by Soul. The headfins you can adjust to fit, and the gills are rigged. Both come with a hud to change the texture and have a second layer for tattoo effects. The skin by Fallen Gods Oceanica Still Eclipse comes with many appliers, including the ones I used for the The Mesh Project head and body. The Trident by CerberusXing comes in handheld and back staff versions. The mermaid eyes are by Antielle and come in several colors. The tentacle belt and arm wraps are by BluPrintz. It comes with a hud to control base color, highlights, and suction cup colors. The nipple rings are by Haus of Darcy. Right now if you are member of the H.O.D. VIP group, 50L to join, you get the a 150L gift certificate to celebrity the designer's birthday, as well as all the other group gifts. What a nice surprise! The corset for guys is by Schadenfreude. it comes with 3 black texture patterns. The gloves are by Swagga. They are non-rigged and mod so you tint and scale them for a good fit. The Beck hair by Tableau Vivant worked perfectly with the headress, and I used the TV hair base applier for the TMP head. From Aii is the cool eyeliner and mole applier for the TMP head. Most mermaid poses are for girls, so I made a more manly mer style pose for this image. 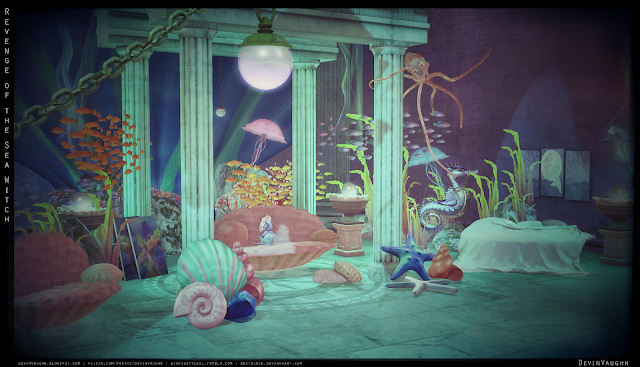 (click to enlarge)
STORYLINE: She couldn't take her mind off the young man. His eyes haunted her. Would he be ok? She wanted to see him again. She had so many questions about him, and about the world on the surface. She couldn't help but wonder what life would be like with him as a husband. When she arrived back home the SeaWitch was waiting for her. "You look unhappy, my poor child. Surely it's not a problem I couldn't help you solve," she grinned like a shark who caught a fish.

Shown above are many awesome decor items that came together to create what feels like to me, a teenage mermaid's bedroom. I used in both images the Odyssey's temple and pearl lights by Fallen Gods from this year's Fantasy Faire. The MeadowWorks octopus, seaweed, and fish schools are also from a gacha at Fantasy Faire, but now you can play it at the mainstore. I love this gacha! Another great gacha is by DeviousMind, the seahorse wearable rider. I used it for room decor. The couch, armchair, and bed are by Zerkalo. It comes in pg or adult. The Ursula plushie on the couch is by Moon Amore, its animated. The seashells are by Plastik and have a color change hud. The paintings on the backwall and canvases on the ground are by Jian. They are inspiration for the whole color theme. Beautiful colors. From A Tattered Page's 20,000 Leagues Under the Sea are the jellyfish by Spyralle, and the Dugong by The Muses. It's actually an avatar but I turned it into a sculpture. Overall this room is just stunning. Beautiful work from all the designers.