Revenge of the SeaWitch, 1 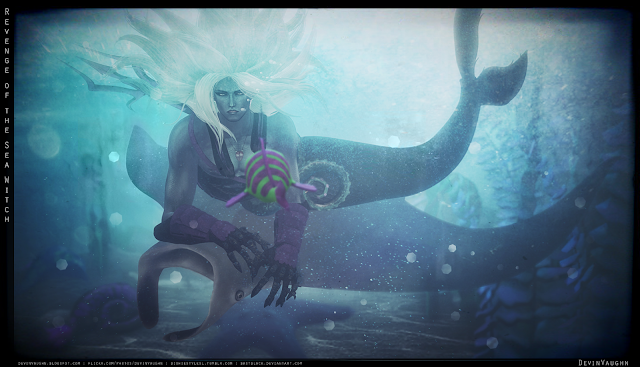 (click to enlarge)
STORYLINE: Come my little guppies, gather around, and I will tell you a tale of how things came to be as they are now. Back when the Mer people had little knowledge of the Terrains, and the Terrains knew little of the Mer, a powerful Seawitch invoked the wrath of my predecessor, King Triton. He placed upon her a curse to limit her power. No longer could she conjure things for her own personal gain. No, she could only use magic in the service of others. But the crafty Seawitch was not so easily beaten. She plotted her revenge on his youngest daughter, and in the process hoped to slough off King's curse.

It's the summer of the Mer, and nowhere else will you find a stunning collection mermaid theme items then at the new round of Enchanted. I'm so happy to see this event has returned. The past stamp rallies limited the number of stores that could be in the event, but it has a sim once more and the rally has been replaced with a free hunt. How awesome is that? There is also live burlesque show in the theme of the event. (The lady lobster dinner was a hoot!) I love coming up with a new twist to the fairy tale, and I have worked up a new one for The Little Mermaid with some backstory on the Seawitch.

Shown above is the Underwater from the Editorial hair gacha by Tableau Vivant at The Arcade. (I love these posed hairstyles!) King Eric is wearing the Fallen Gods Oceanica Still Eclipse that comes with many appliers, including those for TheMeshProject. The Trident is by CerberusXing. It's mod so I give it a purple tint. I also tinted these awesome gloves by Swagga from the past Genre round. I looked in the mainstore for them, but it appears they are not there yet. The giant Manta Ray by Ravenghost is wearable, rideable, and it can also wander. The wings and tail are flexi. The tail I am wearing is by Plastik. (btw, for artistic reasons I made the tail more curved in the knee area for the image above.)  It comes in male and female, wet or dry texture, with many possible color choices. One interesting perk of this tail is the very deep "v" in the front. I'm sure you guys will love that. lol For modesty sake, I used the BluPrintz Tentacle Necklace as belt, sort of like a fishy loin cloth I guess. lol It worked out great, love that necklace with all the color hud options. It's mod so you can adjust it to fit where you want it. Around the shoulders are the Caly's Babies eels by aisling. They come with a hud to turn on left, or right eel, or wear both, and also add a 2nd color to their fins. The Eyes are an Enchantment Hunt prize by antielle. Several colors are included in the prize. The gargoyle ears are by Eclectica, and come with a hud to change to the colors and textures. The mole and eyeliner are appliers by Aii. The setting is by Death Row, the andolys Ariel's cozy spot. The seashells are by Plastik and come with hud with many color and texture options. If you know the original fairy tale, you know the Little Mermaid's tongue was cut off in order for her to be human. What luck The Horror! made a tongue necklace. It was gift from Origami that just ended. For fun I added the Lust nipple rings by Haus of Darcy. And lastly, over at Creator's Collection Box is another great Mermaid theme gift, the Merfolks Gift Poses by Kami Hitoe. There are 2 male mer tails and a male ao also. To get the gift, just join the CCB group to get the gift.  For more information on Enchantment, go to:  http://enchantmentsl.com/
On Him, King Eric:
Skin, appliers: Fallen Gods Oceanica [xy] Still, Eclipse (Enchantment)(660L)
Trident: CerberusXing Tidal Trident (Silver+BackSheath)[mesh](Enchantment)(350L)
Pets: aisling Caly's Babies - Male [mesh](Enchantment)(250L)
Tail: Plastik Urseus Mermaid Tail - Male -Wet-Pitch[mesh](Enchantment)(649L)
Eyes: antielle Mermaid Eyes Gray [mesh](Enchantment, Hunt Prize)(free)
Hair: Tableau Vivant Editorial \ underwater - funky, gacha [mesh](The Arcade)(50L)
Belt: BluPrintz Tentacle Necklace [mesh](149L)
Corset: Schadenfreude Noir Something Wicked Corsets male [mesh] (275L)
Gloves: SWaGGa Demon Glove [mesh](past Genre)
Necklace: The Horror! Torn Tongue Necklace (past, Origami Hunt Prize)
Nipple piercing: Haus of Darcy Lust MESH Nipples - Razor [mesh](150L)
Mole applier: Aii Beauty Marks TMP head applier (25L)
Eyemakeup applier: Aii Unisex Eyeliner Mega Pack TMP (99L)
Head: TheMeshProject (BETA) Head(m) - Anime (Deluxe) [mesh](5000L)
Body: TheMeshProject (BETA) Deluxe Body [mesh](5000L)
Pose: Kami Hitoe Merfolks Gift Poses for CCB (Creator's Collection Box)(group gift, free)