World Goth Fair: What We Do In Cursed, 2 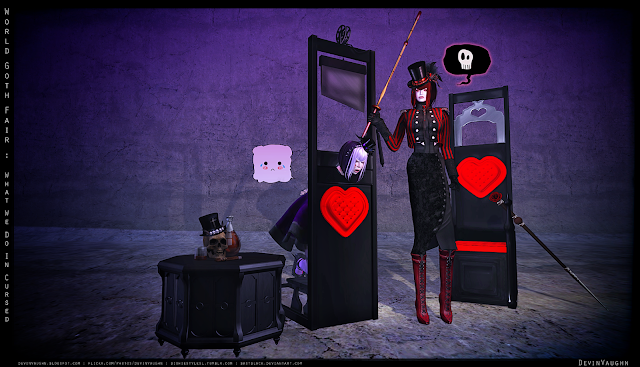 (click to enlarge)
STORYLINE: It had been one year since the walls around Cursed fell. Those imprisoned in the City of Cursed for being "dark" won their freedom at last! Scarlet, the leader of the Rebellion, was finally reunited with her long lost sister Elizabeth. Their joy was overwhelming. But like any sisters, they eventually had some disagreements.... At first the arguments were over little things like clothing borrowing without permission. Just normal sisterly squabbles, right? Well, mostly. Only a sister of Darkness would threaten to add her sister's head to the collection if the Baron La Croix's sacred skull was not returned immediately.

I'm so happy I was able to return to the Elizabeth and Scarlet plotline from last year. It felt unfinished to not show their reunion last year. But since a year has past, well..., Elizabeth is discovering some of the unpleasant sides of her older sister. lol

The Femdom throne and Gullotine at by Unkindness. The set is a new release for ROMP. The Queen of Hearts throne includes several sitting positions, and the guillotine has a uncomfortable pose for the naughty. The Kendo Sword by Souzou Eien is from the current Anime round of Genre. It comes script with changeable holding poses, or unscripted. You can mod, so I added a red tint to the grips. The Rose cane is by Chaos Panic and Disorder on sale at World Goth Fair. And the Gothic endtable, cognac, and glass are by 22769 ~[bauwerk] on sale at World Goth Fair. The Skull is a group gift from Contraption and the Baron's top hat comes from the Tableau Vivant Samedy hair set. ... Scarlet is wearing the jacket by Dark Water Designs on sale at World Goth Fair. The system corset and fitted mesh skirt with texture hud are by Sakide. The Charlotte boots are by Bliensen + MaiTai. They come in red or black and have a texture hud to change decoration on the boot from rose to raven. Scarlet's pose by Black Tulip is one from the Lost in the Woods set, on sale at WGF. .... For details on what Elizabeth is wearing, head over to the Dark Phantom blog.

On her, Elizabeth the Cute Clown:
Guest Appearance: Aarya Phantomhive
(Part two of the Elizabeth storyline and style card coming soon to the Dark Phantom blog) 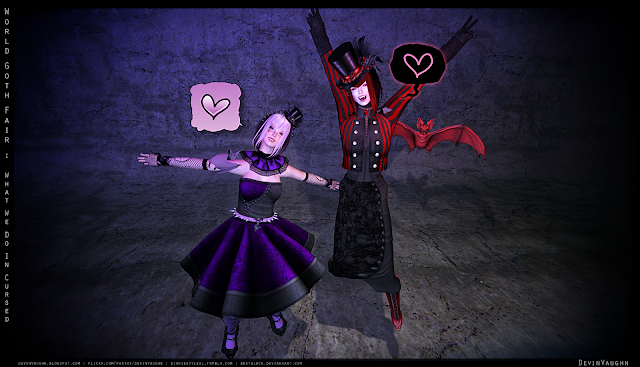 (click to enlarge)
STORYLINE: Despite their differences, (and silly arguments over who is the hottest Hottie in Cursed), Elizabeth and Scarlet had a bond so strong the wall that kept them apart broke first.

The hats and Scarlet's necklace are from the deviousMind gacha at the Fantasy Gacha Carnival. Each item has 5 colors you can select from a popup menu. Scarlet is wearing the Crystal Spider hat and collar and it makes me happy since the Spiders are a symbol for the Rebellion in my Cursed storylines. ...The collar on Elizabeth is by Sweet Lies, also at the Fnatasy Gacha. ...The white bat on Elizabath's shoulder and the red bat by Scarlet are from the Arkham gacha by Swagga. They're so awesome! Best looking bats in SL! ... Both Scarlet and Elizabeth are wearing the Chelo hair by Olive on sale at the Dark Style Fair. You can get a simple color pack, larger color pack, or fatpack. You can color the streaks separate from the back of the hair.

World Goth Fair has released it's DJ schedule for the big day, World Goth Day on May 22, and it's even longer than in the past! Schedule below. WGF has lots of staggered releases, some will be released on May 22nd for World Goth Day, so be sure stop by and enjoy the tunes. 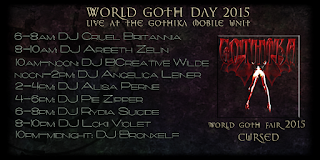