World Goth Fair: What We Do In Cursed, 4 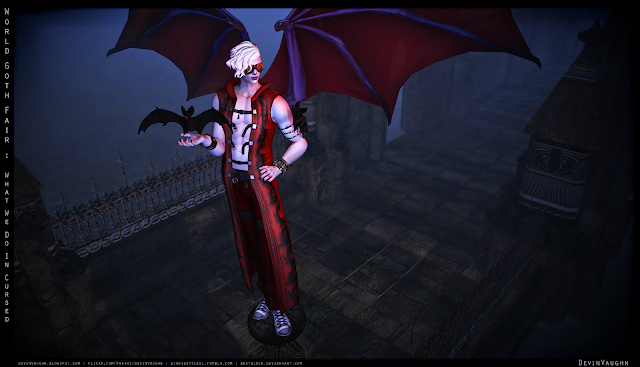 (click to enlarge)
STORYLINE: Wrath got caught smuggling during the Scarlet Rebellion. After he lost his job when the Deathhead Scouts were disbanded, he didn't know what to do with himself. He had two great passions: Bats, and giving the middle finger to the authorities. He went on to become the first Carrier Bat Keeper in Cursed (similar to Carrier Pigeons but with squeaks and midnight runs). His bats became a popular way to smuggle secret messages out of Cursed.

The World Goth Day all-day party continues at Club Gothika at the World Goth Fair. But this party doesn't end today, there is a special upcoming live performance! Read more details here: https://worldgothfair.wordpress.com  The designers have released several new items today at the fair, so be sure to swing by and have a good time chat and listening to the music too.

Pictured above are the Swagga Arkham bats from the Fantasy Gacha. They come in black, white, and red, for arms, head, and the rare on the chest. The pants are also by Swagga, The Omega Pants, for Totally Top Shelf. They come in red and black fitted mesh for the default avatar or TheMeshProject body. ...The Seb hair by Tableau Vivant is on sale at the Men's Department. You can get it normal or with one side shaved like in the picture above. ...From The Dark Fae is the The Line Make jackets on sale at World Goth Fair. They come in fatpack of all gothic color needs. ... The Nylon Chucks by FATEstep are called Nylon not for the fabric, but the Designer of the Nylon Outfitters. She made artwork for these sneaker. With the texture change hud, you can recolor all the various parts and choose that painting you like. I adore these shoes with their original artwork! ... The mask is the steampunky Eyes of the TechnoMancer by Eudora 3D. They have a hud to change the color of the lens. ... These huge wings are by Europa. They include many colors and a tattered wing option. ... Cuffs by Mandala, and face piercings by Haus of Darcy and HV. Chapstick by Random Matters. ... And lastly, Kooqla has released a blue tone Malus skin with a TMP body applier as a group gift right now.