How the Sakura Got its Bloom 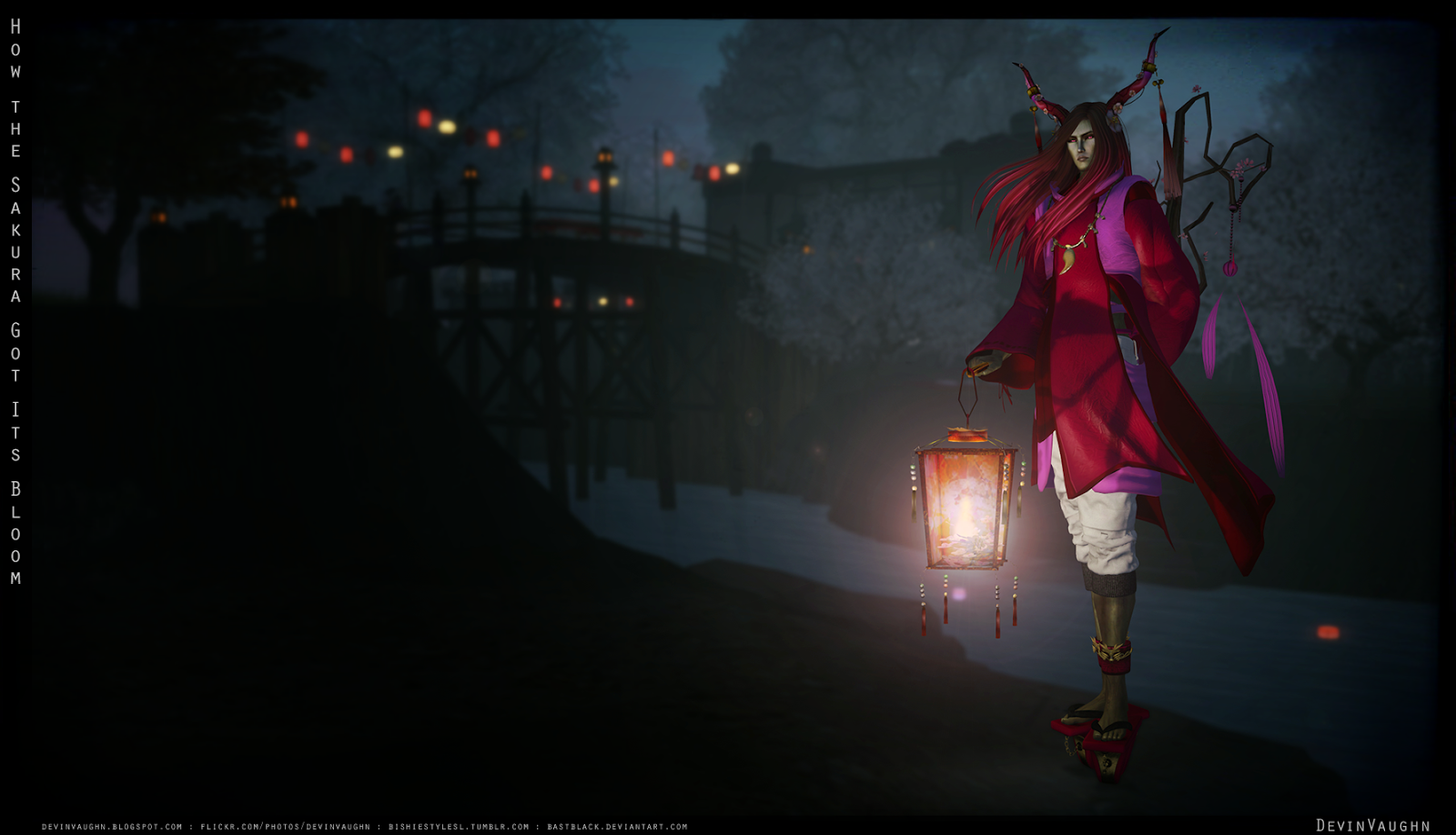 (click to enlarge)
STORYLINE: Back in time when the Sakura did not bloom like does today, the Emperor's beloved wife became ill during pregnancy with their first child. The physicians did what they could. All that was left was to pray. The Emperor went to the scared tree that oversaw his rule. He begged the spirit of the Sakura do him a favor once more and save his wife and unborn child.

Going on now is the Origami Spring Festival. It's a lovely time of year in Japan when the beautiful Cherry Trees bloom. The Origami event in SecondLife is not to be missed! There are so many awesome goodies and ambiance, and that of the surrounding sims, is excellent! The picture above was taken at the entrance of the event. Go here: Origami Event and for more information on Origami, head over to the blog here:  Origamiivent.Blogspot.Jp  Event ends April 4th.

This idea was inspired by two things, the cherry bloom theme of Origami and the wonderful new Wood Nymph skin by Fallen Gods. It comes in male and female, and those of you using mesh for your avatar, I have awesome news! The male Wood Nymph includes appliers for Slink hands and feet, The MeshProject body and head, and even an applier for Lotus! Fallen Gods skins on TMP look amazing! The awesome geta are from CerberusXing on sale at Origami. They are unrigged so you can fit them system, slink, or TMP feet. They come in black and light wood. I used the light ones, and added a pink tint to match the overall look. Fun! The cool horns, tail, and lantern are from the Ayakashi Yokocho gacha at Origami. The eerie pink glowing eyes are Ghoul eyes Bonbon by Lovely Disarry. The top, sleeves, necklace and cuffs are by Koshino Yamatano Orochi by BareRose and I added a tint to it. The pants are Cropped Sarrouel Pants by Chronokit. I love the movement in the Breeze hair by Tableau Vivant. It's from a past Creation.Jp event. Pose by Momomuller. (click to enlarge)
STORYLINE: The Spirit of the tree knew the unborn child was female and she would grow up as beautiful and delicate as her mother. So after much pleading, the Spirit agreed on one condition, the princess would join him and become his wife once she came of age. The Emperor was horrified and refused. Hearing his distress, Spirit told him not to worry, each Spring she would return and bring her beauty back into the world she left behind. With tearful eyes the Emperor agreed, and that is how the Sakura got it's bloom.

I'm so excited to show you this sweet tea house, Cha-Shitsu modern, by Theater Chain. I was lucky to get a sneak peek of this wonderful creation being constructed. It's all mesh with a clean white and black color palette. There are two front sliding doors, and off to the side is a sliding door for the host. It comes with two cushion for the patio, left is a female smoking pose, and right is for male. Inside there is an additional matt, hearth, and traditional tea ceremony kettle with wooden serving spoon. The tea house is 53 Li. You can see as demo for the house at the entrance gate of the event.

Also from Origami is the Wagasa Umbrella and bench. Touch the parasol and you change it's textures. The bench has 16 poses for male and female, and the two items are 2 li together. Over at the Tea House are lovely Traditional Japanese Furniture gacha items by Silvery K: the Kimono display, Tobacco box, and paper lantern. (NOTE: I used many of these Silvry K gacha items in a separate project, -- Prim Perfect's Linden Home Challenge: Japan. When the article comes out, I will let you all know!). Also shown are the {anc} obi display and cushions. The cherry trees are a subscription gift by Isovii.

The story idea of How the Sakura Got It's Bloom is by Fulli. Thanks Full!