The Seduction of Snow White, part 3 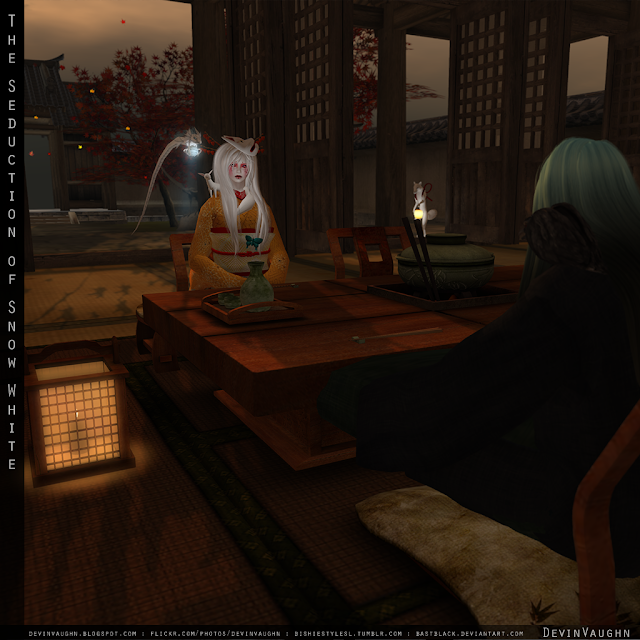 (click to enlarge)
STORYLINE: Generations upon generations of geisha perfected the art of beauty just as the men perfected the martial arts. Among them rose a legend, a geisha 87 years old, who looked as fresh as the morning dew. It had been to her Prince Ravenna traveled to learn the secret. Contrary to Geisha Tsuyu's claims, she did not really have a miracle skin moisturizer. The trickster was using black magic. When Snow White came into being, Prince Ravenna suspected the old witch was behind it. In a rage, he journeyed to her once more. He grabbed her by the throat and demanded she undo the damage to his beautiful skin. She claimed to be innocent. Her magic only brought to the surface the beauty that was inside. How could she have known what rotten a person he really was? He called her a liar. She was no more inwardly beautiful than he was, conning women into buying her useless cosmetics. She was so outraged, she cursed him again.

At the center of this image is this really nice dining set by Okami on sale at We <3 Role Pay. It comes with 4 seats, and multiple animations for men and women. I'm playing the wicked witch and wearing the new hair Kodji by Ayashi which worked great here for a youkai kind of vibe. Kodji is rigged mesh for both male and female. The Fox mask is by Sakka's Studio, and my fox shoulder pet by Sadistic Hacker. The Japanese Lantern hairsticks are by Tama from the past Genre. My second pet is really cool soul collector by Aii. The skin is a Halloween group gift by Glam Affair. The cool orb eyes are a group gift by Candy Mountain. And this badass makeup is by Avea on sale at We <3 Role Play. The spiderweb kimono and butterfly brooch are gacha prizes from the October round of Fantasy Gacha by Geisha Designs. There is very cute bow in the back. The trees in the courtyard are subscriber gifts by Isovii. The fox in the courtyard behind me is by anz-an. The awesome building is by ryusho Ort. Fulli is helping me out here and taking over the role as the Prince. She is wearing the Sakka's Studio men's causal Kimono and it comes with so many options, it's really nice. The hair is a new release Vlodovic by Tableau Vivant. I will be showing more of this cool hair. And lastly, the Raven shoulder pet is by Ohmai. It's one of 50 original prizes by the Beetlebone / Ohmai creative powerhouse team you can win at Nuville. If you love Halloween like I do, I highly recommend you make a trip to Nuville! I LOVE IT! Grab a bud and go have fun. You can get one 12 hour pass for 100L, or join the group for 800L and get more gifts and unlimited access to Nuville. ... Part 4 of Snow White coming soon...

On Him, Prince Ravenna:

Thanks for you help Fulli!
Posted by Devin Vaughn at 5:07 AM