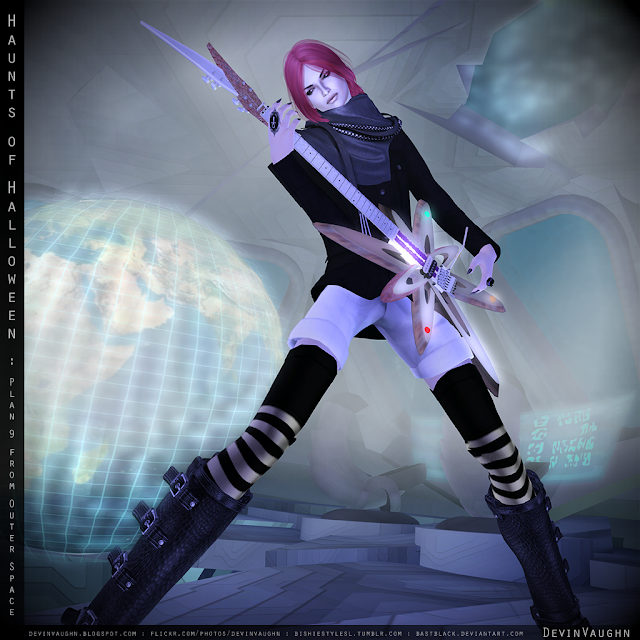 (click to enlarge)
STORYLINE: The son of The Great Tyrant was beautiful like his father, an angel, but he had a wicked heart like his mother. He set eyes on conquering the homeworld of Barbarella, one screaming fangirl at a time.

Triple stars for you rock trivia fans who name the alludes in the image above: movie, band, and guitarist. For the Oh Hair by Tableau Vivant and I used pink in the Equinox pack for Visual Kei look. The jacket by Kuana I got at FaMESHed and should be in the mainstore soon. The cool neckwarmer by Shi is at Collabor88, as well as the color change ankh rings by Maxi Gossamer. The Circa ring is an animated spider in the gacha at HorrorFest. I'm wearing the handy Frozen Night shorts again, but this time I am wearing mesh stocking from Sn@tch. To make this work on a guy and boost my Visual cred, I paired it with the platform boots by Lapointe & Bastchild. The fun Mikkokosmos guitar is one of 2 Luckyboards you can win at Libber's Guitars. There is also a free off-the-shoulder guitar, and a typing effect guitar. The picture is taken at a cool wrecked spaceship under the ocean at DDU.