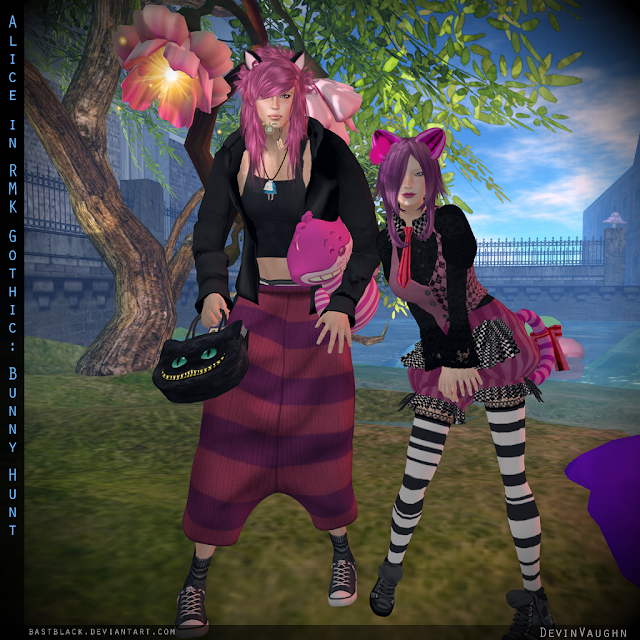 (click to enlarge)
STORYLINE: "The bitter rival of The Cards gang is The Pinks," the White Rabbit continued. "The Pinks get their moniker for their psychedelic pink and purple stripes. The Cards could easily wipe out these housecats, except for one thing. The Pinks have access to The Nip. You see, by groveling at the foot of humans, The Pinks are assured of an endless supply of catnip. They are the drug lords of Wonderland. All Cards are addicted to Nip, especially Fangs who looks high with that big creepy grin of his. According to secret agent Easter, The Pinks leader Snookums is rumored to have the ability to shrink or enlarge someone by adding a concoction to their food or drink. Persons who displease this pampered puss end up a tasty meal, or turned into a wearable trophy."

The Cheshire mesh pants and Alice lower necklace from Sheep Door also come with a fun raccoon dog like mesh tail. Pants come in both male and female. The bag by WTG has a color change eyes, a Humpty Dumpty keychain, and Alice in Wonderland book on the inside. It's is from last year's Bunny Hunt but the good news is you can buy both the black and tabby versions at the WTG, not too far from the where the prize machine book is. I'm also wearing two prizes from We're All Mad Here Hunt, a pocketwatch nommie from Freaky Design, and Cheshire plushie from Anymore. The female Pinks outfit from Galette has a mesh vest, and a cute pink curled tail.