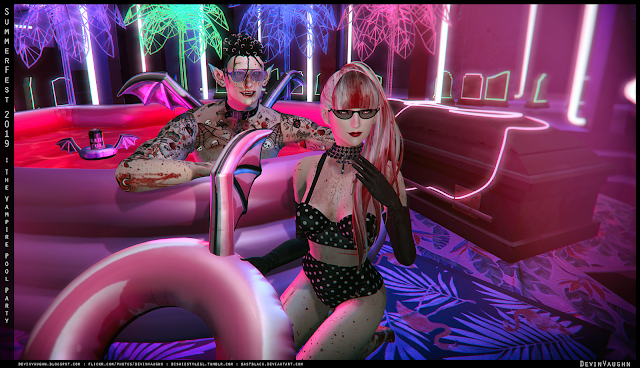 (click to enlarge)
STORYLINE: Summer is a time for going to the beach, splashing in the surf, and soaking in the sun. But what about the creatures of the night? Are they doomed to never experience the joys of summer?  Well down on the Moonset Strip at a little club called the Rockabilly Rox, the vampires are throwing a hell of a pool party. The speakers are blasting, coffins and headstones lined in neon, beach balls bouncing everywhere, and over at the dance floor the Nosferatu are splashing around happily in inflatable pools filled with suspicious looking red liquids. Who says only humans get to enjoy summer?

Summerfest is close to an end, but forget to grab the the fun-gear for your Summer. The image above was inspired by Schadenfreude's fun inflatable pool, bat wing inner tubes and floating drink holders. All them come with a hud to change the colors combinations in many ways, and their materials catch a perfect plasticky look in the light. The floating drink holder and ring, will slowly turn on the water for a realistic floating effect. The inner tube also comes in a Vehicle version, so you can race around and terrorize your neighbors in your own floating batmobile. There is a wearable ring, and floating ring and inner tube both have poses  build into them. The skull shaped inflatable pool can change its colors and even do a sugar skull texture versions. And you can change the water color from white, blue, pink, toxic green or of course red.  On the floor are beautiful Triton beach towels with poses from Balaclava.  From S16B, I picked up the cool Tootime club skybox by Anxiety for 30% off. Also from Anxiety are the neon gravestone group gift, and the neon coffin from the Cult gacha. The finishing touch of neon wireframe palm trees are from Foxcity.

Also from Summerfest are the retro Surfer sunglasses by Bondi which comes with a hud to make many different color combinations and bonus fatpack colors, and Val hair from Action that includes the option to turn rings in the hair on or off. Vampire Valerie is modeling the pose from Eidolon available in the Sumer Picnic Pack.

On Her, Vampire Valerie:

Thank you for your help, Fulli!