Revenge of the Red Leaf Tribe 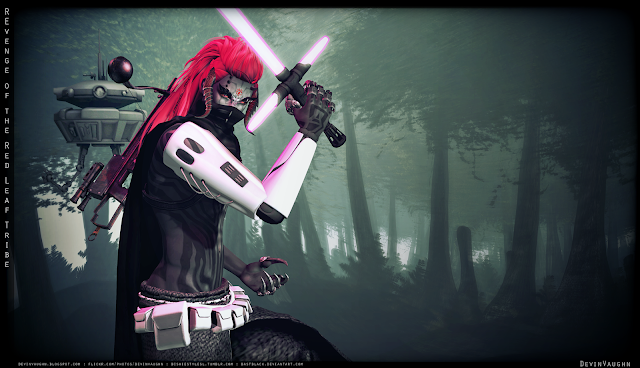 (click to enlarge)
STORYLINE: The last of the Red Leaf Tribe, the shy Devva Vauke, learned quickly what a cruel place the galaxy was. Now a castaway on his own homeworld, he could choose to give up and die with his people, or could he choose to fight and live on by any means necessary. Loneliness changes a man. Gone was the soft tender glow in his eyes. It was now replaced with the sharp focus of a predator looking for revenge. It was Vauke who had latent force ability, not anyone else from his tribe. The fear that drove Amemph to slaughter all the Red Leaf had instead triggered the very thing he feared most, the birth of a new force user.

Fallen Gods has a new cool body marking gacha at The Fantasy Gacha. It comes as a tattoo layer for the body with appliers and a system face. But for my character I wanted to use the TMP head, so I used the Pure Coal skin for the body with the Legacy tattoo on top, and for the face, I used the skin Legacy of Maul. It works pretty closely but there is a slight seam at the neck so I used the Yasum face mask rather than fuss with it.  The Armor is Not The Droid Parts by QweenB at the Fantasy Gacha. You can win several colors. The parts are not rigged, so it was easy to scale it up for male fit. The Cross Guard Saber is from the FGC gacha by Equinox. I love these sabers. (You can see it in action below.) In the background is luring the ominous Rebel Hunter driod by Sushi. Chewie's The Crossbow gun worn on the back is by MaySoul. Dark Side Pants by Aphotic, and belt by Muschilu. This lion mane of pink hair awesomeness is by Truth. Love the style. The cape is by FATEplay and comes with a hud to change the style for hood up or down, cape length, and how it draps over the shoulder. The claws for TMP are by CerberusXing. Horns by Death Row, and Cubic Cherry. Face jewelry by Barerose. Make up by Lovely Disarray. And thanks to Niiiigel for the Nicotine poses. 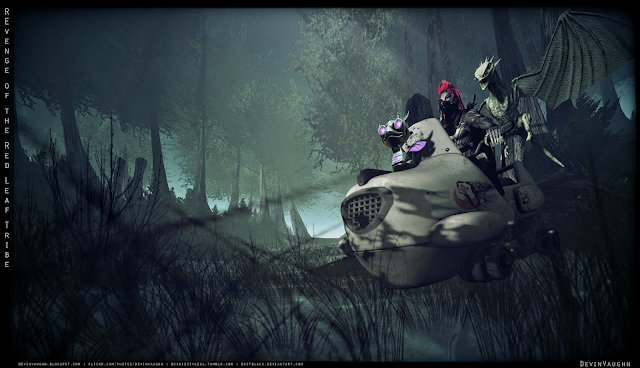 (click to enlarge)
STORYLINE: Vauke's love for exploring the swamp of the Fire Snake is what saved his life. It wasn't such a bad place when using a Recon Wader with a Navbot. And if anything attacked, he always had his overprotective pet dragon he called Spitting Rage, or Spiddle for short.

Shown here are some more fun toys at the Fantasy Gacha Carnival. The All Terrain Recon Transport is wearable and will animate when you walk. The adorable Dragon bot, D-R4CO, is by HEXtraordinary. His is an animated pet you can wear. Chasing behind, is the White Attacking Dragon by 22769. There are 3 colors and 3 different dragon poses you can win. He has a breathing chest animation, and is completely editable, so you can tint or scale them up or down as you need. very nice. These pictures were taken at the dark and moody Pandemonium sim.