A Child Who Cannot Die, 1 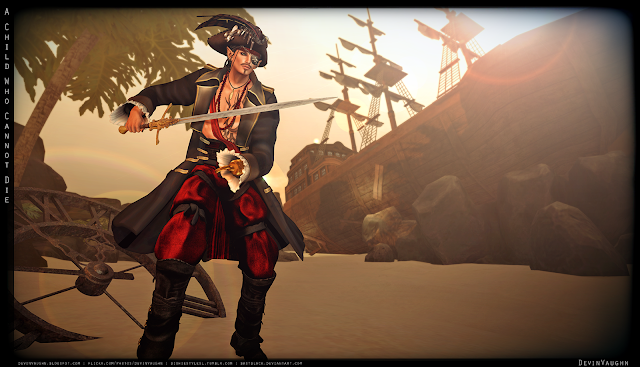 (click to enlarge)
STORYLINE: Much has been written about the boy who never grew up, but few know the true genesis of the tale. Behind the sweeping adventures in Neverland, there was always the sound of a ticking clock. Tick tock. Tick tock. Tick tock.... Perhaps one needs to look no further than the archenemy of the boy, Captain James Hook, for an insight on what was really going on. Hook was forever trying to kill Peter. But isn't it odd the fearless pirate grew weak at the sight of blood?

Enchantment is going on strong with many wonderful creations, live performances, and of course the popular hunt. This round's theme is Peter Pan. Each round I enjoy making my own twist to the fairy tale. This time I found an interesting detail about story's creation, I hope you enjoy it. ... Shown above is the Pan Pants by Pucca Firecaster. They come in male and female, two leg lengths (one long and one for boots), and also include a hud for texture change. The pants are mod, so you can tint them too. The wonderful Admiral hat is by Remarkable Oblivion. You can get red, blue, brown, or black. The hats come with a resize script. The Skull and Crossbones eyepatch is from the gacha by Astralia. By AiShA is Corsair Hook Hand. There were several other hook styles, this one worked great for me under the coat and it's rigged. In the background is the Neverland Clock by 22769 ~ [bauwerk]. The clock keeps time and makes noises too. Finishing out my outfit is the jacket, sash, tattoo, and necklaces by BareRose's Pirate Emperor. The boots from The Raider outfit by Quality Designs. They are sculpted prim that attach to the upper leg and foot. The traditional Captain Hook has a black ringlet wig but I would much rather rock a Jack Sparrow style so I used the No Smoke dreadlocks by No.Match. They come in both male and female fit. The goatee is by Scared, and the sword with texture change hud is by Kalopsia. The Season 5 ears by Mandala are awesome! I picked them up during the 12 Days of Savings going on right now in the marketplace. Just type "12 Days of Christmas" in the search and you can see all the deals. The Tox skin by Tableau Vivant you can buy as a system skin, shown above, or face applier for the TMP head. For body appliers for SLinka nd TMP, you can get those at the mainstore. This picture was taken at pirate island in the wonderful adventure game PaleoQuest by Linden Labs. I love that place, its so fun to visit. 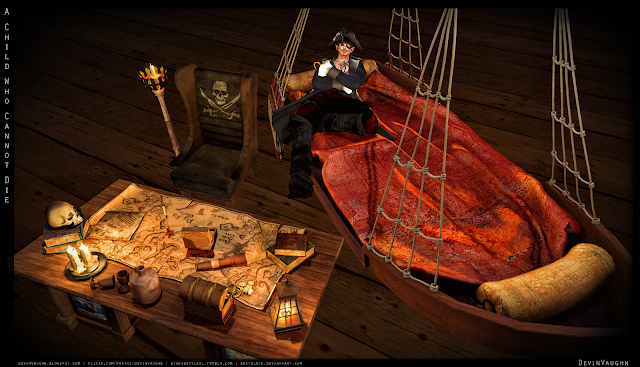 (click to enlarge)
I love these decor pieces, makes me feel like a kid again. How awesome is that pirate bed by Nomad? It comes in 2 colors and it's mod so you can tint it too. The Captain's desk by Tia has so many wonderful details from the story Peter Pan built into it.