The Four Horsemen of the Apocalypse: War 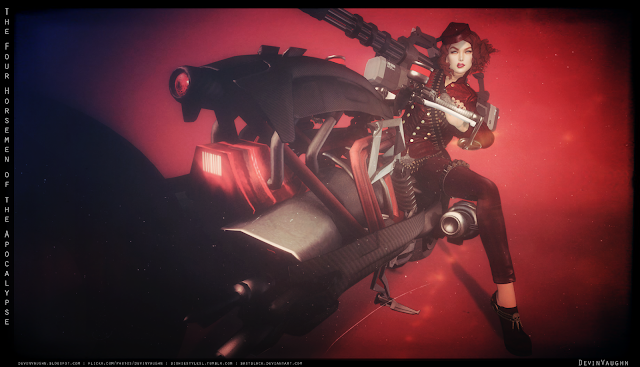 (click to enlarge)
STORYLINE:  "Carmine Zuigiber turned and stared at the bodies surrounding her as if she hadn't the faintest idea of how they came to be there. She licked a spatter of blood -- someone else's -- from the back of her hand with a scarlet, cat-like tongue. Then she smiled. And she walked out of the bar, her heels clicking on the tiles like the tapping of distant hammers. War goes where the action is. Or more accurately, the action finds her. She's fine with that.. She gets bored after a few hundred years or so, so it pays to keep things interesting." - Good Omen on Four Horsemen of the Apocalypse - WAR

*sings* War! What is it good for? Absolutely nothing! Say it again.... Oh yes, I couldn't let the month slip by without serving up this saucy angel of the Apocalypse. She's one of the many brilliant characters in the comedic novel, Good Omens by the Neil Gaiman, and the late Terry Pratchett. If you haven't read it yet, I highly recommend it. It's a great summer read. And it's also the theme of this month's A Tattered Page. Better hurry like it's the end of the world, today is the last day. Hop over here for a nice shopping guide. Shown above are the War Shoes by Pale Empress. These heels are awesome with chains, skull, and bullets. The exclusive red is at an awesome price at 95L! The leggings by Foxes are also a great deal only available today in Fifty Linden Friday. From this summer's past round of ROMP is the Commander's Jacket and cap by AP.PAREL. Sadly right now it doesn't appear to be in the mainstore location, hopefully it will in the near future. It has an great latex effect in materials. This jacket is made for the guys, but War had no problem wearing it. From Tableau Vivant is the Hortensia hair on sale at the new Gladiator round of Secret Affair. The sexy expression for War is thanks for the cool Julia mesh-head gacha by Genesis Labs over at Kustom9. It comes with the mesh head, hud for eyebrow color change, eyes, ears, teeth, applier for slink hands and feet (but not the slink body), Maitreya body, shape, and default skin. The makeup can also be won on the gacha. The bullet garter is actually a repurposed Gunslinger Armband by Sax Shephard Designs. The FATEplay Willow's bullet belt is on two places, across the hips and chest. To get the bullet sash, I rezzed it as a prop. A year ago, Schism Industries closed it's store and offered all it's anime-inspired prim based weapons for free. As far as I know, it's no longer available inworld. The Raven Motorcycle one of the excellent creations by Sau motorcycles. It has all the features of the Sau motorcycles, an original mesh design, and the frame and body can texture change.