Birth of a Reaper, 1 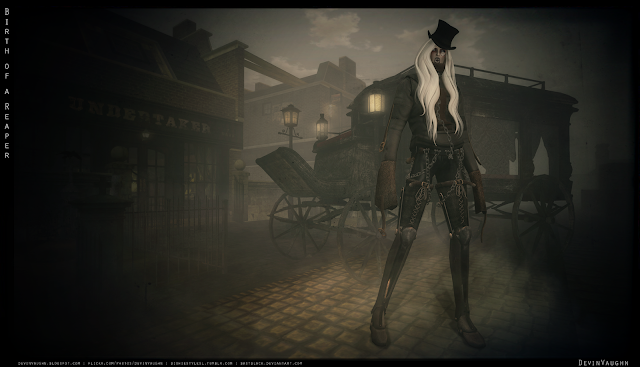 (click to enlarge)
STORYLINE: A wandering woman in fancy garb stopped dead in her tracks. She had no care that she was in the middle of a busy cobblestone street. She had just seen a frightful sight. There, before the Undertaker's shop was a scary looking man in bonds. "You," she glided towards him. "It's a faint memory, but yes. Yes. I do remember your face. You were dear to me. Why do you look so horrifying? What happened to you? Why are you in chains?" His dazed eyes looked towards her. They flickered like candlelight through the Mutoscope. "I am cursed," he moaned pitifully. "I have committed a terrible sin." As if to demonstrate, he lifted his straightjacketed arms and rattled his chains. She was taken aback. "Well surely, it can't be that bad." She made a gallant effort to sound cheerful and dusted the cobwebs off his shoulder. "Tell me what happened."

ROMP Fair Summer is in full swing, and among the interesting items you can pick up is the new Contraption straightjacket. It comes in male and female, lighter and gunmetal color, fitted mesh version with arms unbound, and one with arms wrapped up. It's wonderful and I am so excited to see Contraption making clothing now. The Leg Prosthesis also by Contraption are on sale at The Men's Department. They are fitted mesh so you can scale the foot to any size you like, and adjust the thickness at the upper thigh. Also at ROMP is the fun Chains Set by Swagga. It comes with boxers, and fits for the default avatar and The Mesh Project body. In the background is an awesome new release by Death Row, - The Funeral Hearse. It comes in new and old styles. There is a hud to change the textures on seating and the curtains. It's 15 land impact, and loaded with poses for singles, and couples, plus an adult version. The top hat and monocle are from the Death Row outfits gacha from last month's Arcade. The Flourish hair is by Magika, and works great on the guys and under hats. The Flesh Eater teeth are from [ni.Ju]. They come in clean and bloody, open and smile. ... I was really inspired by all these awesome new goodies. Part two of the Birth of a Reaper will show some more goodies from ROMP. You can read more details about ROMP Fair Summer here: https://rompfair.wordpress.com/