Last of the Red Leaf Tribe 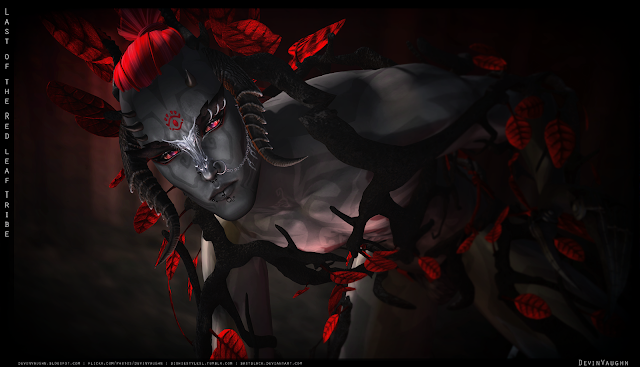 (click to enlarge)
STORYLINE: Many moons ago, the prodigal son of Red Leaf carried out unspeakable crimes in far away place beyond the sky. They said his heart had been twisted by evil. Many fearful foreigners with terrifying weapons came to hunt down the Red Leaf. It didn't matter they were innocents. If one dark seed came from the Red Leaf surely there could be another. But the hunters missed one, the shy Devva Vauke who lived alone in the forest of the fire snake. He was now the last of his tribe.


I wrestled with this character all month and finally I got a look I loved. He's like an alien Last of the Mohicans. You can pick the Legacy of Maul skin at WLRP on sale today, and then after that head to the Fallen Gods mainstore. Maul includes appliers for slink nails, lotus, Uniear, TMP, and L'Uomo. ... A new event for role players is The Conquest. The druid tree body jewels is by Swagga. It's fitted mesh and works great with the TMP body. I tinted the light tree bark for a darker color. ... The one year anniversary round of Creation.Jp has begun! There are lots of excellent goodies and gifts too. Above is the Eastern Promises hair by Tableau Vivant. It comes in rigged, unrigged, whole, and two separate parts and a complete hair color selection. It also has excellent new hair bases for the TMP head. .. And if you haven't stopped by Tengoku no Rakuen, today is the last day to scoop up the deals like the Haus of Darcy Kyo piercings. ... I went crazy with horns, combining 4 different ones. The horns at the side of the face are by Death Row, the horns running along the hairline are by Souzou Eien. The forehead horns are by Cubic Cherry. And the funky eyebrow horns are from a gacha by Death Row. ... The amazing eyemakeup and forehead symbol are by Lovely Disarray. The makeup can worn by either male or female TMP heads. ... The cool nose guard is by BareRose, and the claws are by CerberusXing. ... One of the best undies in SL for men is Jungle Men by Pucca Firecaster. I had no problem adjusting it to TMP body and it fits wonderfully on the default avi too. It includes a hud to change the various textures and you can tint it too.