The Mysterious Event at the Mars Arena 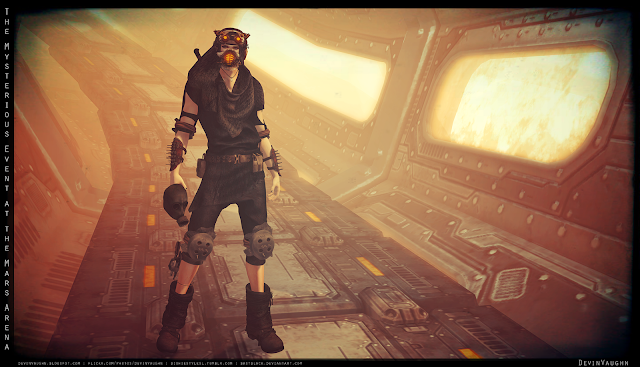 (click to enlarge)
STORYLINE: The miners on Mars were all given the day off, and since the miners are never given a day off, there was a great deal of excitement. They were told to head to the Mars Arena. The rumor was some big shot from Earth was performing a free concert, or was it huge birthday bash for one the Lords of Mars? The miners quickly departed for the event, expect for one guy, Drake Knife. It's not that he was a sour puss, he just didn't trust the Mars Lords. He was sure to pack a gas mask, pistol, and a machete before following his comrades down the dust-choked tunnels.

SL12B has begun, and once more there are breathtakingly awesome builds for the main stages and welcome area. The image above was shot on location at the Astonish DJ stage. I love this scifi build with it's creepy Scorpion alien creature. It's a lot of fun to explore. For my Martian miner, I have a combination of post apocalyptic items by Death Row and Swagga. From the Death Row male at the Arcade are the post apocalyptic head scarf, gas mask, belt, boots, and machete with chest belt. For fun, I added the calf pistol from the girl's version of the gacha. By Swagga is the cool motorcycle helmet ApocMoto. It comes with or without the glow details. Matching it are the ApocoMoto bracers, elbow and knee pads. From 7 Mad Ravens is the Guardian Medallion necklace. It also comes with a crucifix necklace. ... There are lots of do this weekend at SL12B. Have fun gang, and Happy 12th Birthday SecondLife!