Hackers of Mars: Sanctuary in the Sky 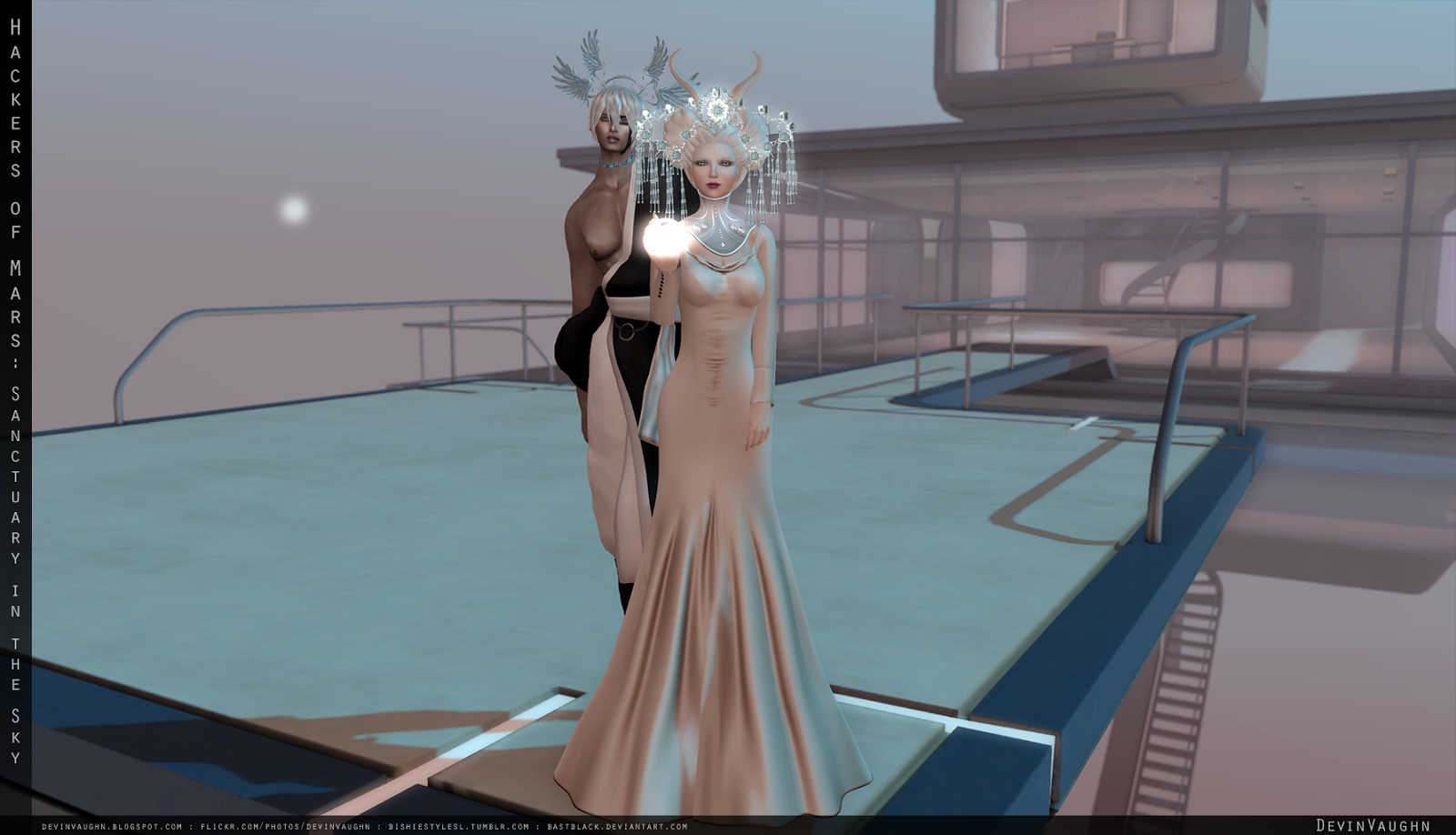 (click to enlarge)
STORYLINE: As Static Charge's ship landed on a private sky home landing pad, two people were waiting for his arrival. They quickly hid him below, out of view. Many questions were asked about life in the mines and in the sky. Static soon discovered the "Sanctuary in the Sky" was no sanctuary at all. It was populated with genetically engineered hybrids, just like on the surface, but these slaves were designed to cater to every comfort and desire of the Mars Lords. Their lives only appeared glamorous. There were true horrors in the sky his two new friends would not even dare to whisper in the shadows.

Its been fun to do something a space opera flavor. lol.  Fulli is wears a great gown by Junbug at Collarbor88 and the sale is ending soon! Go get this while it's still at a low low price! It comes in several different colors, and you can pick up a fur wrap and matching clutch too. Her headdress and hair are by Tukinowaguma. The cool Viron collar by Rosal has animating light textures which you can tint any color you like. She's wear two makeups by Nuuna to create a scifi geisha look. On her raised hand is one piece of the DiGi Grid Defender Equinox set. (I'm loving the the Grid Defender idea!) This incredibly gorgeous scifi elegant home is by Fanatik. It's all one piece mesh, no rez box. ...And don't forget, Cursed Events' Futurewave is coming soon! 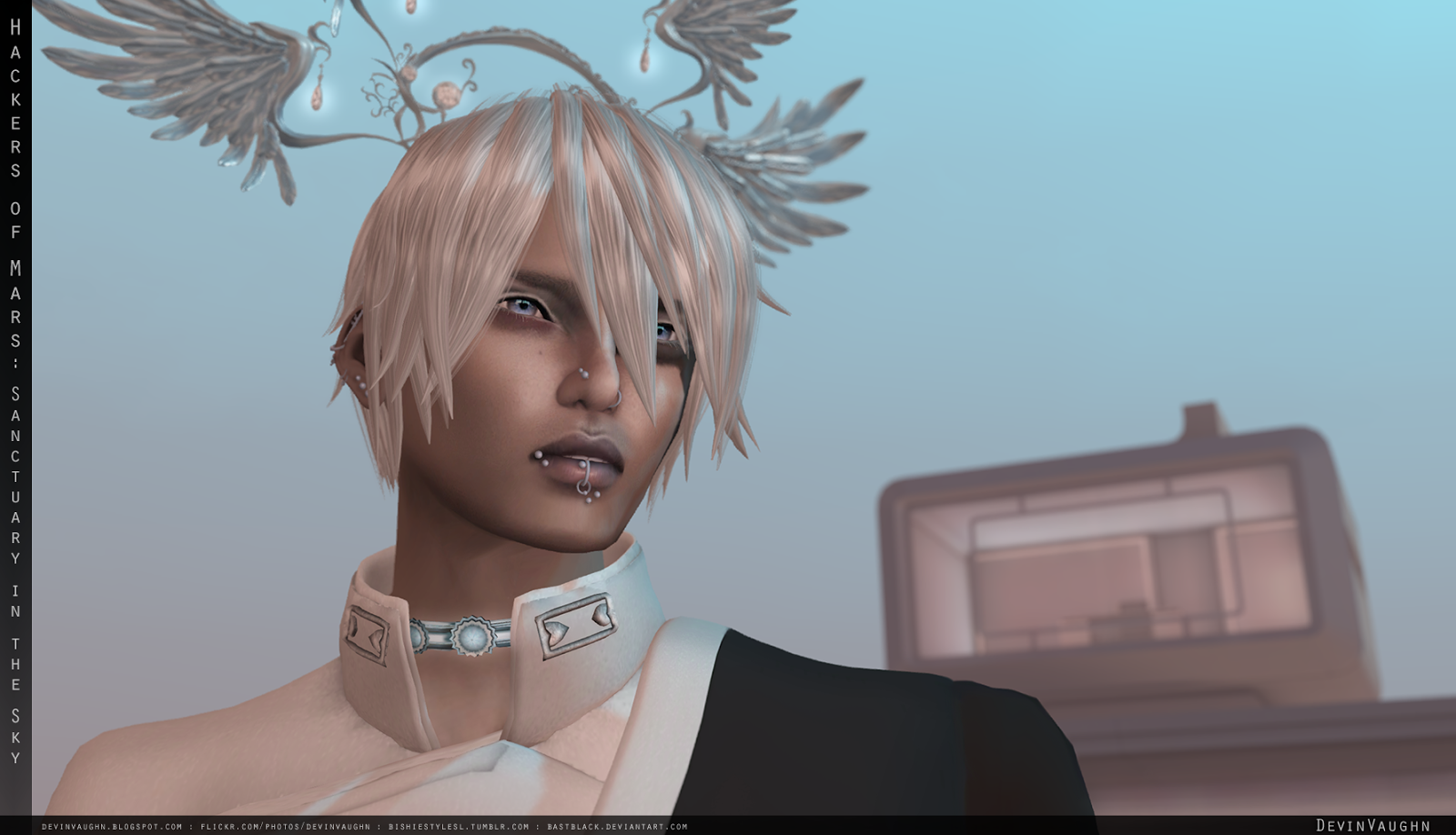 (click to enlarge)
STORYLINE: Among the denizens of the sky was a manservant named Yuu. He was hopelessly in love with the Sky Maiden he was meant to protect until she was of age to marry the Lord of the South. She was exactly engineered to the taste of his master. The thought of that vicious beast ever touching her drove him insane. He concocted a desperate plan to escape to the Earth. Time was running out. It was Yuu who hacked the main sever and inserted a vulnerably that allowed Static Charge to enter the Skyzone.

Yuu is wearing the new hair Kirito by Ayashi. It has a kawaii boyishness to it that's great on mesh anime head as well the default avi. The hair is unrigged hair so you can scale it on the xyz. The face and ear piercings are all mesh by House of Darcy. Each piece is separate so you can move it around for a good fit. Piercings come in several colors, I'm wearing Frost. The piercings work great with the mesh ears by Mandala. The Kabuki Shishi outfit by Barerose is fun. It's part military, part kimono. You can wear in two ways, but if you go without the jacket there is not an alpha for shirtless, so you may need to borrow an alpha from different off-the-shoulder kimono. The headdress is Air Shen by AIR and can you believe this is a gacha? The detail is so beautiful. Give it a spin for 50L and see what color you get. Yes I am wearing a mesh eyelash again. If you wondering about trying it, but dont want to spend alot, try the Del's Mesh eyelashes for 20L. It will require editing, but if you're handy at editing it's not trouble. What I did here was use the lower eyelash only for a more manly Clockwork Orange type style. Wearing only the lower lash is also great because there is no problem with blinking. lol. This skin is great past group gift from Tableau Vivant. To mix it up and give it a whole new look, I combined the Tableau Vivant Vincent white eye makeup with the Nuuna male makeup. The side stripe echoes the off the shoulder kimono. To give Yuu a more sensual look, I added a excellent freebie teeth tattoo by Avea Heartsick. I don't think it's still available, but you might some other great goodies in the Avea Archives. The Ice Collar you can pick up for free at the Open Collar hubs. I matched Yuu's frosty coloring for his nails too. It took several trail and errors before I found a Hello Dave nail applier for Slink that match his coloring and also work for a more manly style nail. The eyes by S0NG I picked up at RMK Frost Fair. They look awesome with a blueish reflection. The eyes by S0NG you find at the main store. They come in only one size, mesh and system.