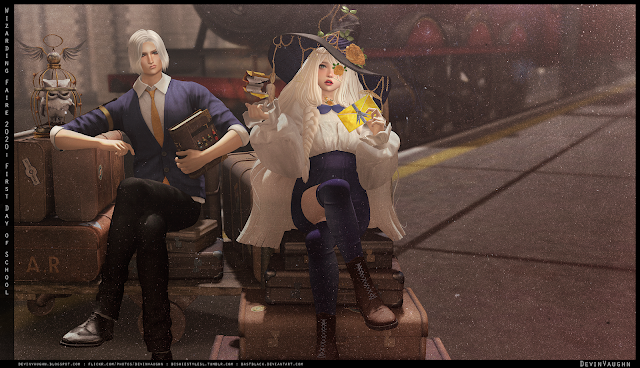 (click to enlarge)
STORYLINE: Fennimore's parents told him he had to take his little cousin Willow with him to Hogwarts. She was shy and worried about getting lost in the train station. When he didn't offer his hand for her to hold, she held onto his shirt tail instead. "I'm going to be in Ravenclaw too, Fenny!" she shouted over the busy noise. "We can have lunch and dinner together everyday!" But he could hardly stay mad at her. When he disappeared into the wall at platform 9 3/4, she gasped. Her eyes shone brightly. It reminded him of his first time going to Hogwarts. Maybe it wouldn't hurt to help her out.

Wizarding Faire is so full of good stuff to inspire, it can be hard to pick a theme! The First Day of School was inspired by the Luggage carts from Sari-Sari and the animesh Howler letter from Guhit x Salemi. Willow's outfit from the Ersch Harriet Gacha, and necklace by Oxide. Fennimore is wearing the Wand Armband and potions book by Hopscotch, and his unhappy owl friend from gacha by Yokai. 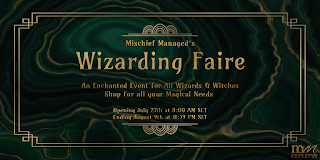