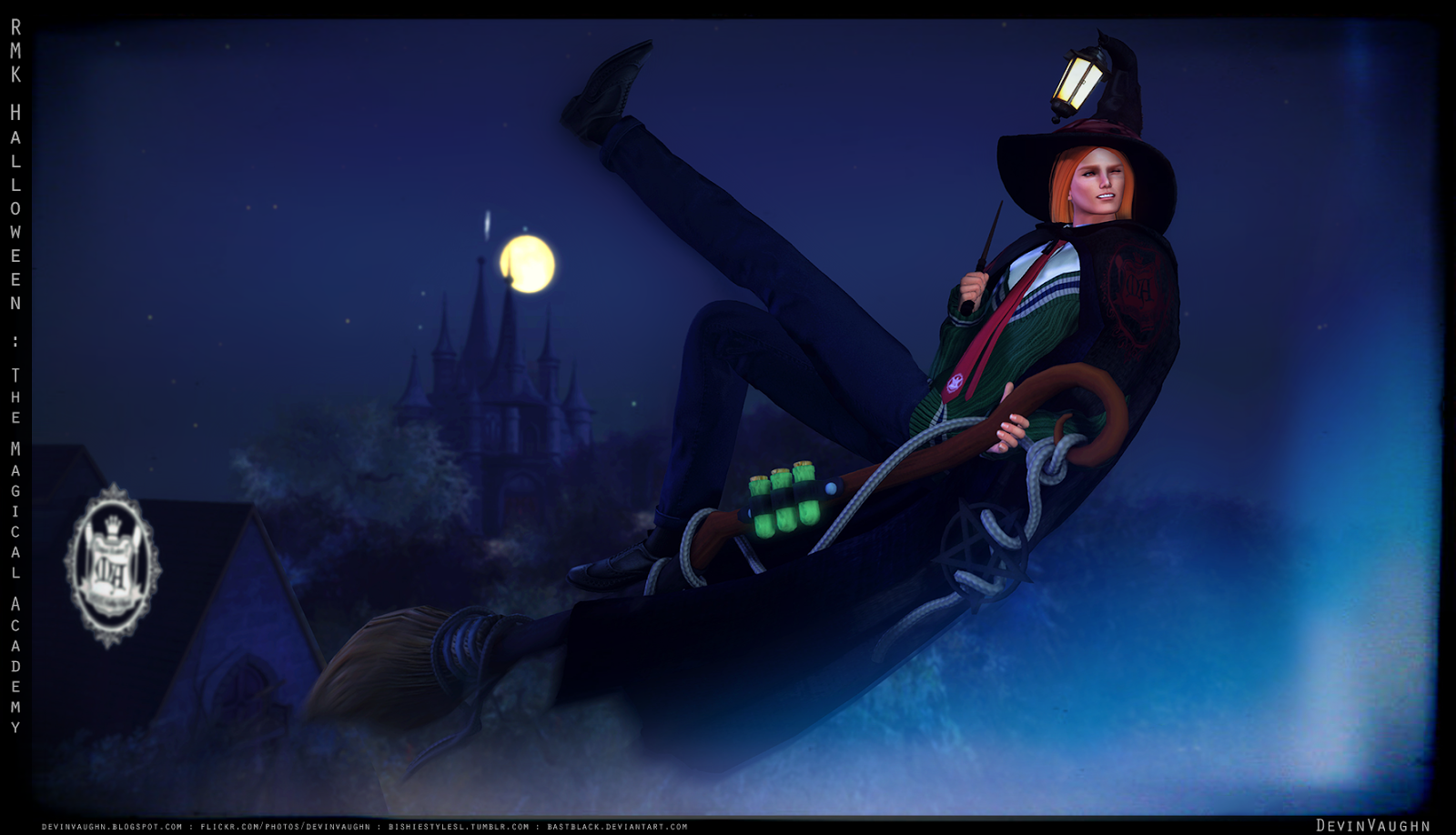 (click to enlarge)
STORYLINE: While the young students of the Ghost Academy struggled to control their brooms and fly through each gate on the course, their older classmates would preform trick stunts and often sent the rookies flying into thickets of thorns.

The idea for this outfit was one to match with the Magical Academy's schoolgirl's uniform (see image below). I used the new Preppy sweater and pants by Monso.   For the witch elements, I used my Rare Will o' Wisp win from Remarkable Oblivion' Witch Hats gacha last year. I have good news too, Remarkable Oblivion has a new series of witch hats coming out for this year at the Tag Gacha. It opens Oct 17th.  Working perfectly under the witch and with the cape, is the new group gift Huds Test Hair by Tableau Vivant. Tableau Vivant has just reopened it hair store with a brand new look, and completely new hair color huds!  Run go get the gift and play with all the many new cool colors! I picked this lovely strawberry blonde, it's my second favorite hair color after white. I'm so happy to finally have a nice strawberry color in SL!   The wand is part of the FATEplay's Henry outfit for the guys. The wand comes with a hud to trigger a spell cast animation. Working great with the pants, are the Deco wingtip shoes with socks. The cape is by Pucca Firecaster. It comes with an attachment to add a logo to the shoulders. In fact, monso tie has an add-on for logo also, I dropped on both Magical Academy logo. Fun! .... But I know what you guys really want to know, WHERE IS THAT BADASS BROOM?!! lol It's the prize by NeverWish at the RMK Halloween's Dream Gacha! It's unscripted and you can mod it. So you can tint it, resize it, or drop a script in it to make it fly. Just play the games at RMK and you can win it or make trades for it.  How do you play? In a nutshell: Play games and earn coins for the Dream Gacha. You have until October 31st to complete the challenges and get the prizes. For more information, and pictures of the prizes go to: http://rmkghost.blogspot.jp  Tutorial in English Here.

On him, senior Blaze: (click to enlarge)
STORYLINE: Reiki was a freshman on her first ride on the broom. Instead of flying up, she went down right through the roof of the old theater!

Kemono and the M3 head by Utilizator are so cute, and work perfectly with the free school uniform, reminiscent of Kiki's Delivery Service. You don't need to play the games to get it, just go to the landing and touch Charolette's Raven to get it. The broom and poses are by Uncertain Smile, and you can win them at the Dream Gacha. The mod and skin are created by Mad Echo, and the eyes by Mad Echo are coming soon. The hair by LCKY was a Femboy Hunt prize last month. And the scarf is by Kariritaisho's own store, Hey Listen!

Location: RMK Halloween: Broom Course
Thanks for your help, Kariritaisho!