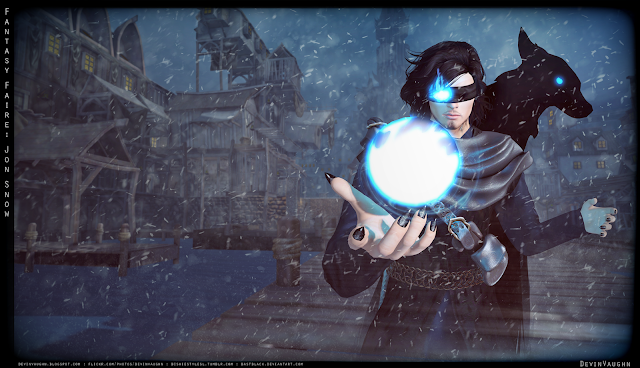 (click to enlarge)
STORYLINE: What was it like, drifting between worlds, neither alive or dead? Jon should have felt nothing, and saw nothing, but he did. Through the eye of his pet direwolf Ghost, he could see into the living world. It was a magic called warging, a talent that ran in the Stark family. But it wasn't until he lay dying, his blood spilling in the snow, that he discovered this skill inside himself. His spirit had cried out to Ghost in a panic. The wolf embraced him, soothing him like a frighten cub as his body died. And then they merged into one. What had died that day was not him, but his naiveté. If given another chance, he would not make the same mistake twice.

So many people want to know if Jon Snow, from Game of Thrones, comes back. I read an interesting fan theory the other day so I worked it up into an image. This picture is shot at the amazing Fantasy Faire Dangarnon sim by Death Row Designs. Its so easy to get lost there! So much densely packed details, its hard to believe it's SL. All the buildings are for sell, and cave and tower are relay donation items. The giant evil looking tower will be auctioned off at the end of the Fantasy Faire, all funds will be donated to the American Cancer Society, Relay for Life. Don't miss this amazing sim! Only 2 more days are left of the Faire.  Shown above is the Stitched EPOS Albar tunic for men at Fantasy Faire. The shirt underneath is grey but for my image I tinted it a darker color. From BluPrintz is very cool blindfold with animated flames coming out of one eyehole. Very cool effect. It's mod so you can adjust it for the perfect fit or tint the flames and glow.  From Poseidon is the Wizard 1 pose pack with pose and orb.  Over at the Epicene event, is this very cool leather shawl by Noble Creations. You can get it for male and female, black or brown.  The spooky Shadowed Wolf by Aii is an attachment that floats behind you. The trail is flexi so it makes a nice spooky effect when moving.  Making for a nice Jon Snow look is the Adam mesh head by Absolut Creation, and the Mon Tableau Vivant hair.  The belt and sword are the outfits gacha by Death Row.  Have fun at the Fantasy Faire this weekend! Be sure to check the main website for the event schedule, hunt guide, and shopping catalog. https://fantasyfairesl.wordpress.com/