The Return of Pretty Pretty 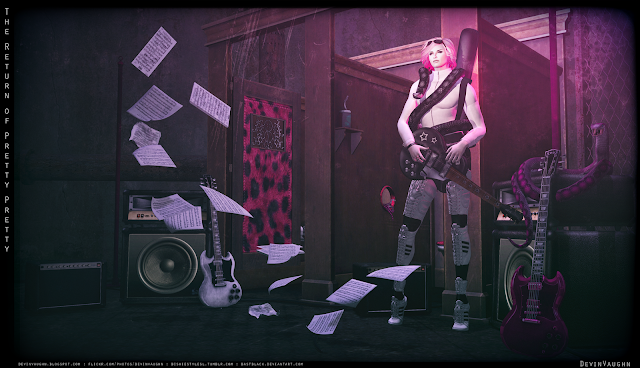 (click to enlarge)
STORYLINE: Rock Star Pretty Pretty had always been eccentric. He said he was an alien. He said his father was an angel. He even claimed his mother was The Great Tyrant. When his private jet crashed, all bodies onboard were found except his. So when Pretty Pretty reemerged from the shadows five years later with a smirk that reports of his death were premature, his fans accepted it without question. He wasted no time reforming his band Ophiuchus, and working on a new album with the tentative tile, "Shithole." Just like old times, he shocked music journalists when announced he would be recording the new album in a public restroom because, "the acoustics were killer." So what if someone flushed, or there was some other rude noises, he figured it would just give the album street cred. The fans and media were hyped. But no one stopped to question his miraculous return. No one wondered what deep, dark secret Pretty Pretty could possibly be hiding.

This was a fun, wacky idea combining elements from several events. From ROMP is something I have waited for so long.... latex bodysuit for men! The Aaron shirt from Salt and Pepper comes in 8 colors, or the fatpack with a hud to change the textures of latex and the zipper. It comes in Fitmesh and Slink. There is also matching latex pants you can buy.  From Death Row at ROMP is the new Gloryhole deluxe bathroom. Once you pose on it, the doors will open. It comes in PG and Adult poses. I love the Pink Panther one with pink fuzzy door and toilet.  The dance pole from Tarnished is also on sale at ROMP. Its mod so I tinted it pink.   From Epicene is the "Best Song Ever" amp, guitar, and music sheet pose pack by Wet Cat. It comes in unisex or couple versions. Touch the amp and the speaker will start to pound. Touch the guitar and could change it's color. The poses will also attach a headphone to you.   From Reign are these badass Sucidie Heels that come in two parts for the thigh and foot so can wear them both or just one. They come it fits for Freya, Slink hourglass and physique, Maitreya, and Venus. But none for the guys, right? Well, I couldn't resist doing some creative Frankenstiening with my avatar so I could pull off these boots using the female Physique for the lower body and latex Aaron Shirt Slink for the upper body. Worked perfectly!  From Kustom 9 is great new Mon hairstyle from Tableau Vivant. Its a beach themed hair that works great on men and women. For the picture above I used the pink to deep pink fade from the funky color pack.  The rock band's mascot is the snake. Providing the scales and bad attitude are the Elements Snakes type 2 and 4 by Swagga. These are actually rigged wearable pets that will move with you.  The Skybox by Stone Misery is a Homestuff hunt prize, and its an exclusive too! Nice.

On him, Pretty Pretty: