(click to enlarge)
STORYLINE: Fia ran up the cobblestone path to Doyle’s medieval family home. He had his back to her and was wearing a long hooded green cape. “Finally,” she panted. “Hey, was that the Headmaster I just saw leaving?” Doyle didn't react. He seemed stunned. In one hand was an empty tea cup and in the other was some kind of formal owl mail letter. She peered over his shoulder, “Oh, is that an acceptance to bring you back to Hogwarts?” He only seemed to notice her when she lost her balance and almost fell onto him. He turned a solemn face towards her, and she gasped. His beautiful long locks were gone and he was wearing a mask. She took a step backwards. If she didn’t know better, she would have thought he was a Death Eater. “What happened to you?”
Doyle looked down again and stared at the tea cup. “There was an accident. A misfire. Apparently I am dyslexic.” She couldn’t help but feel nervous, he was acting very strangely. “So umm…, what was the Headmaster doing here?”
“He said he would never have expelled me, but the Ministry of Magic forced his hand. Someone embedded in the Ministry wants that cursed Dementor summoning spell I accidentally created.” He turned and looked at Fia. “The Headmaster erased the original spell from textbooks to prevent any attempt to reverse engineer what I did. All of them. Every single book, like it never existed. And from the minds of all students too, ...except me.” Doyle looked off towards the setting sun. “He said, I’m its discoverer. The first new spell in over 133 years. He says I need it for leverage. …You should go away from me.”
“No, Doyle,” she tugged on his cape. “I don’t understand what’s going on, why you are dressed that way, and what's in that letter…”
"Here," he gave it at her. It was invitation to join an elusive private school for pureblood witches and wizards. “They made it clear they were a very expensive. Too expensive for a simple farmboy, but they would graciously waive all fees if I give them the Dementor spell.”
“No. Don’t do it!”
Doyle shrugged, “Do I even have a choice? My magic is growing stronger and I can't control it. Either I join them, or discover which of them infiltrated the Ministry of Magic. If I do that, and I can return to Hogwarts under the Headmaster's protection.”
He looked down at the tea leaves in the cup. “Apparently, its a very dangerous mission.” He dropped the cup and it shattered on the rough stones. “Goodbye.” He mounted his broom and turned to leave.
“No, Wait!” She shoved the symbol-casting spellbook at him. “Take this. It will help you!”
He looked at the book, then his eyes opened wide in amazement. It was like he finally saw her. "Its simple," she beamed, "Don't chant, Draw! No more accidents!"
He carefully tucked the book inside his robes, nodded a thanks to her, and flew away.
I got a little crazy with the Grand Finale to the Trouble with Doyle series. Its been fun. The Wizarding Faire is ending soon. Hurry over and get all the awesome stuff for your own HP inspired stories.
On him, Doyle:
Cape: Hotdog Shady cloak Tall Green [mesh](Wizarding Faire)(250L)
Teacups: Ladybird Trelawney Tea Set [mesh](Wizarding Faire)(250L)
Ring: Hopscotch Magical Ring Snake [mesh](Wizarding Faire)(150L)
Mask: KROVA Vitzili's Mask green [mesh](Midnight Order)(200L)
Nose Chain: Garmonbozia Write me earrings [mesh](Midnight Order)(1 L)
Hair: barberyumyum *barberyumyum*S01 blonde [mesh](300L)
Head, Lips, brows: LeLUTKA lel EvoX KANE 3.1 [mesh](3990L)
Body: TheShops [BODY] Athletic Meshbody (Legacy)(m) (1.0) [mesh](5000L)
Setting:
House: Hisa The Windburrow [mesh](Wizarding Faire)(1475L)
Mailbox: Noxturnal Ye Old Public Spellbook Library [mesh](Wizarding Faire)(300L)
Location: Angel's Nest
Thanks for your help Aarya! 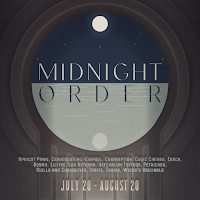