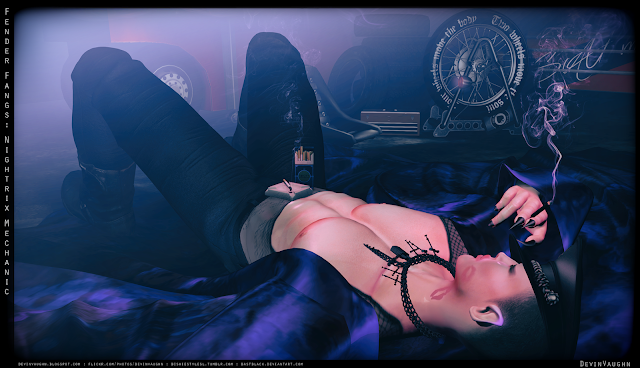 (click to enlarge)
STORYLINE: Lazy smoke trails lingered in the air as if unable to decide which way to turn. The mechanic of the Nightrix gang sighed, and considered the fate of his rival. It's true, he did hate Darren Darkfire, the young upstart from the Fender Fangs who just made lifetime of his work obsolete but at the same time there was a tightly coiled thrill deep inside him. Who else but another mechanic guru could share the same kind of passion he did for tinkering with things that go Vroom. Would the pipsqueak reveal his secrets if showered with praise, or would things get much more, ...interesting?

Here's some great goodies for the guys from the August ROMP. The idea for this series was inspired by the House of Ruby clothing applier, Mechanic. It comes with options for reveal and works on Slink and Omega. The punk necklace by Gabriel comes in black and silver, for guys or girls. The pants by Mirage come with a hud for closed or open zipper. And the beautiful silky robe and pose by Hilu, lay 1 version, is mod so you can stretch it for the best fit, and I added a purple tint to it too. The robes come with a x,y,z resizer hud.