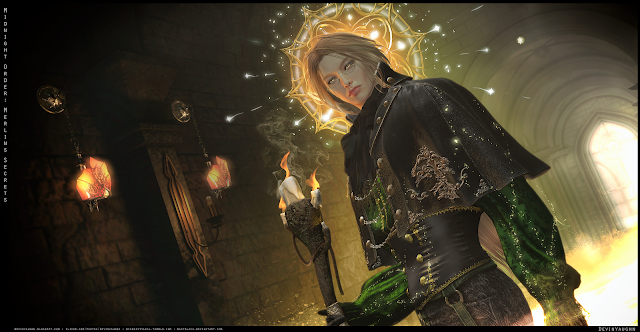 STORYLINE:  As part of our Camelot Exposed series, we here at Midnight Magazine want to shift focus to a well hidden power behind the scenes. No one really thinks much about Merlin. He’s the advisor to the King, and mentor of the White Knight. He’s always busy with the dull tasks of keeping the Kingdom running. And he’s just so cheerful, its annoying! Well, that should have been our first clue he is not as he appears. Our investigative journalists did an incredible job unmasking Merlin as none other than the Golden Knight from the Age of Ruins. Merlin is the true architect of Camelot of the Night in concept as well as stone. Midnight Magazine would love to know more of Goldie’s juicy secrets! Just what kind of game is this ancient being playing??

This round of Midnight Order is ending soon. Head over and check out the new additions at Mid point, such as Contraptions new cyberpunk textures for their Bete Noire outfit. Shown above is my Dark Camelot twist to Kaien Cross. From Midnight Order is the wonderfully gothic and holy Shattering Sun Halo by Oblivis Solem. Its animated and has texture options, or you can edit tint it how you like. From Quills & Curiosities, is the Jacquard Blouse which comes with a texture hud. Te Azrael Pants by AsteroidBox has fits for men and women and texture options. For more magical effects, are the RSS DarkAuraStaff with comes with wearable animated magical dust and sprites as well as the staff which comes with a hud to trigger an animation. In the setting, is the Lestat Sconce by Candle & Cauldron. To change the texture, click the lamp and hold a few seconds then release for the popup menu. Lights can be turned on and off. The skybox is by Spires Society and is wonderful gothic scene to drool over. Don't miss it! I hope you all enjoyed my Midnight Magazine idea. Maybe it will it will back in the future. It was fun to write with a different point of view. 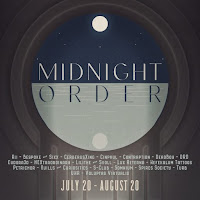