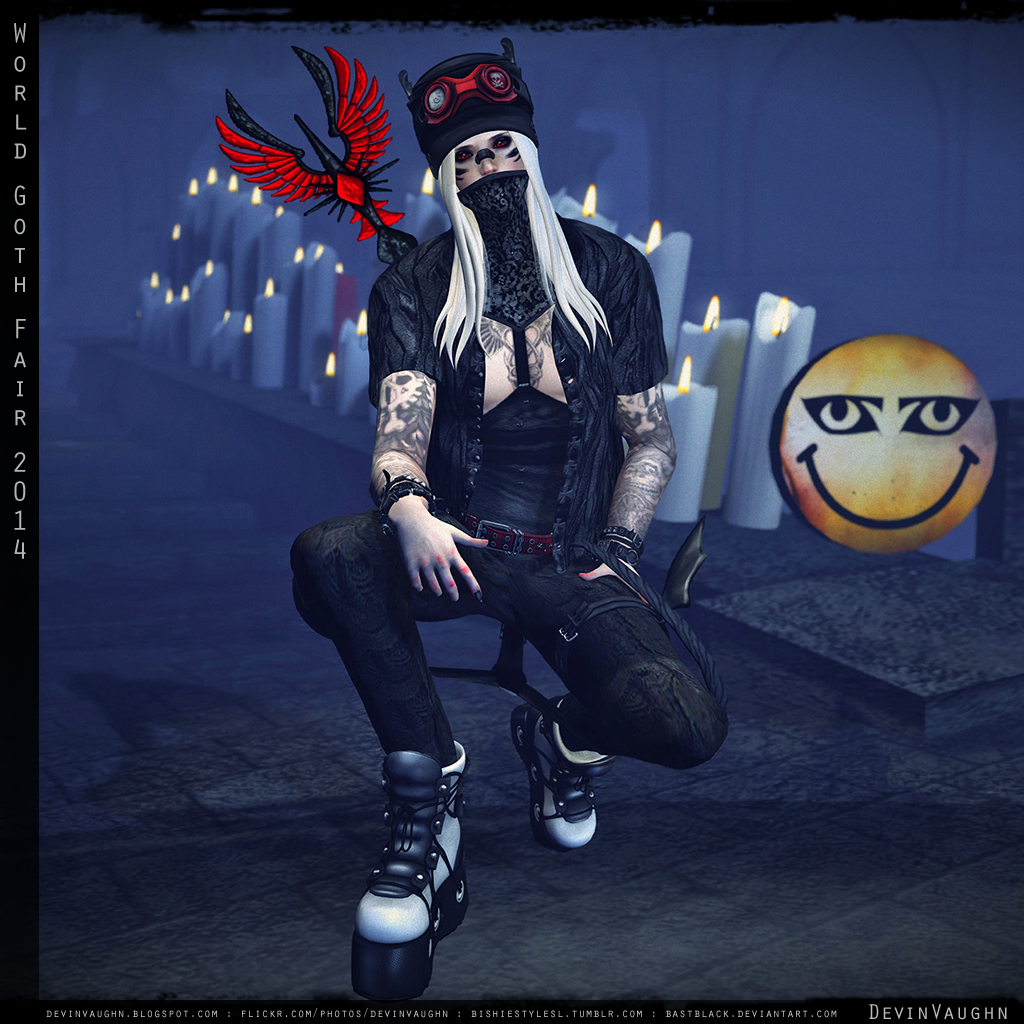 (click to enlarge)
STORYLINE: I'm what the locals call an Enforcer in the city of Cursed, the penal colony of "Darks." In truth, Enforcers don't really have a job title. You see, I was never here and you never saw me. That's not an empty threat either, I really can wipe your memories. *points to the hair* For those who are clueless, that's what the white hair means, an especially powerful Dark. Seriously, wiping the memories of hundreds of humans is something this White Hair would rather not suffer, but it's not my call. The trouble is, after the scandal a year ago of a human/dark hybrid infiltrating Cursed, and the fallout of a recent famous rock star suddenly ending up here, the Scarlet Rebellion finally won a victory. The Council of Elders will open up the city for one day a year.    (Note: to read past versions of the Cursed storyline go here: 1 2 3 4 5 6 7)

WORLD GOTH FAIR! WORLD GOTH FAIR! That's right. The Bats have left the belltower. It's time to head down to WGF and get your Goth on. There are three sims, yes THREE sims of wonderful gothic creations to help raise funds for the Sophie Lancaster Foundation to help stamp out prejudice, hatred, and intolerance everywhere. This is one of my all time favorite events in SL. So many wonderful things come together at this event. WGF will introduce you to all the many active Gothic designers in SL, and even some who are making their debut here. While you shop and drool over the goodies, you can listen to awesome music from Nightbreed Radio and come party at Club Gothika with some of the finest Gothic DJs in SL. Magical things happen. For instance, Friday there was live concert by Jordan Reyne at WGF, and she donated all her tips to S.O.P.H.I.E.. She was amazing with a powerful and compelling voice. Watch her video here: https://www.youtube.com/watch?v=eaGylwkpPOg Returning this year will be the wildly popular officially licensed band clothing! I have sneaked a peek at a few bands listed for WGF this year, and I was jumping up and down. Mark your calendars for May 22, World Goth Day. There will be 12 hours of nonstop live DJing and prizes for costumes. It's a lot of fun! World Goth Fair runs from May 15 - June 1st. 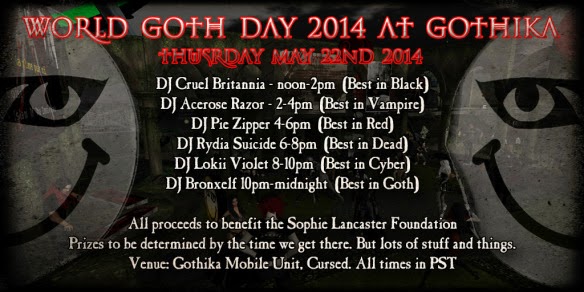 In a true sign Darkness is taking over in May, The Dark Style Fair has also just begun. Many of top designers of SL have come out in force to tempt you over to the darkside with thier tasty goodies. It runs from May 17 - June 7th. In my outfit above I am wearing a mix of things from both events. From World Goth Fair, I am wearing an outfit from ImmateriA that includes pants, suspenders, shirt, undershirt, and a mask. Midnight Eyes are the latest By Snow and include an excellent HUD for the perfect fit, and adding glows or fullbright. The Fishnet nails are a free wearable demo By Snow you can pick up in her booth. On my leg is Bat Garter belt by Squeek! It's super easy to adjust to fit. Love it. Over at Dark Style, I am wearing a funky civil war-like hat by R3VOLT. It comes with a hud to change the colors and textures on all the different material zones. Very cool. The Vanquisher war paint and eye makeup is another excellent new creation from Lovely Disarrary. I'm not often seen wearing tattoos, but I thought it might be fun to wear the Punk tattoo by Zentro. It comes in black ink and color. Did you notice my busted-up hands? That's a sweet tattoo layer for Slink hands by Clemmm. On my nose is bandaid from the Apple May Designs gacha, I won the black skulls. Fun! Death Row Designs has new ankle length Stompers at the TDSF. They come in rigged and non rigged. I am wearing the black and white version. The staff I am wearing is from the Fantasy Gacha by Primus. (I'm so happy I won the red staff.) It's a working weapon with sheath and hold, and you can smack people in the head with it too. lol