The Garden of Good and Evil, 2 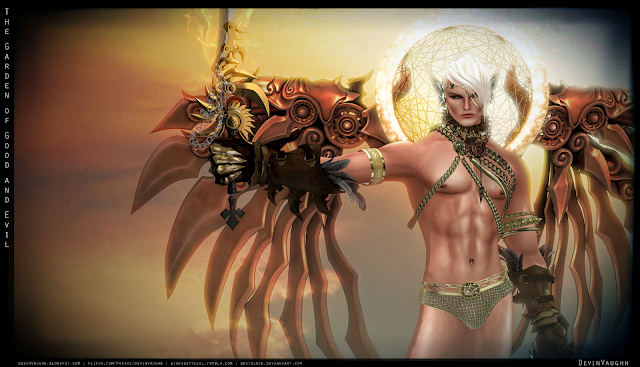 (click to enlarge)
STORYLINE: "Many people, meeting Aziraphale [the Angel of the Eastern Gate] for the first time, formed three impressions: that he was English, that he was intelligent, and that he was gayer than a tree full of monkeys on nitrous oxide. .... 'I think it was a bit of an over-reaction, to be honest,' said the serpent. 'I mean, first offense and everything. I can’t see what's so bad about knowing the difference between good and evil, anyway.'   'It must be bad,' reasoned Aziraphale, in the slightly concerned tones of one who can't see it either, and is worrying about it, 'otherwise you wouldn’t have been involved.'   'They just said, Get up there and make some trouble,' said the serpent.   'Yes, but you’re a demon. I’m not sure if it's actually possible for you to do good,' said Aziraphale. 'It's down to your basic, you know, nature. Nothing personal, you understand.'" - Good Omens by Terry Pratchett and Neil Gaiman


Bling Angel! This one took me a long time to figure out how to style, but the results are great. From the Fantasy Gacha is the Halo by Souzou Eien. The gacha is interesting because I wasn't aware there are symbolic halo shapes for higher angels. I used the Archangel halo for Aziraphale. From Swagga is the the Archangel Sword and Crown. For the crown, I wanted to use the wings on the ears but not the crown, so I made that part transparent. The Sword is a prop but if you want to drop weapon scripts in it you can since its mod. The sword has a bit of a steampunk vibe, so the Cila Mechanical wings at The Secret Affair match it pretty well. The Mechanical wings are a gacha and include a resize script. The blingtastic outfit is Xerxes by EMO-motions. Each piece is mod, so you can adjust it for a good fit. It's a fun outfit to have, you can find it in the accessories section at the mainstore. Over the top of the chest and neck pieces, is the Gabriel Lion Necklace. The last piece of heavy metal are the gauntlets by Remarkable Oblivion. They come with a hud to change the colors and hand pose, they animate too!  By Tableau Vivant is the new skin TOX on sale at The Mens Department. You can buy the applier for the TMP head, and the system skin. If you want TMP body, or Slink Body appliers, head to the mainstore. The hair is also by Tableau Vivant. You can pick up the Kyou hair at We <3 Roleplay. Did you know you pick up TMP beard applier at the Tableau mainstore for free? It's a current group gift, and also for Black Friday the Echo skinline is 50% off!  .. I'm making a list of Black Friday Sales for guys here on plurk and I will be updating it throughout the day: http://www.plurk.com/p/lcjk0f  Have fun out there scooping the deals this weekend.

Posted by Devin Vaughn at 6:38 AM No comments:

Along Came a Spyder, 3 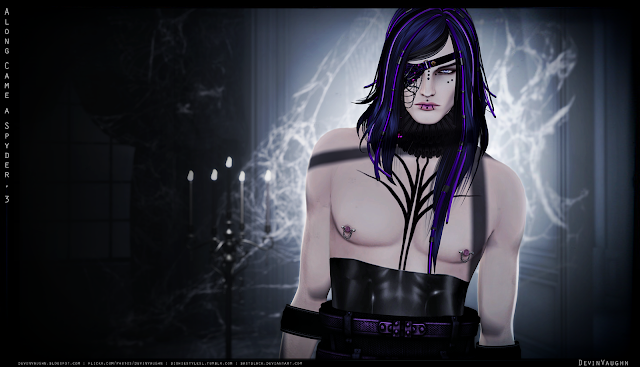 (click to enlarge)
STORYLINE: Viuda Negra Spyder was a traitor to the Vampire Nation. Her suspicious behavior did not escape the eye of her cousin Maylord. He may not have been as gifted in Spyder clan powers as her, but he made up for it in smarts. When she wasn't looking, he attached a web line to her. He followed her straight to the secret lair of the deposed tyrant, Kaiser Kruel. The conspirators were up to something and he was going to find out what. Fortunately for him, there was an abandoned room next door. Whoever it belonged to, hadn't been back since last Christmas. Judging by the layer of dust, no maids serviced it either. It was the perfect place to hide in wait, ...or so he thought.

YES! More fun with spider theme items! This character was inspired by Figment's Drider body at the Fantasy Gacha Carnival. The Drider body comes in male and female with animated legs, and lock for the hip so your ao and poses will work correctly with the body. I used the female and edited my shape to distort the spider body to my tastes. Try spinning the dials for lovehandles and belly to make the the spider bigger! The hair is cool new release by A&Y Cyber Bunker. It has two main parts, the hair and the tube falls. It's made for girls, but since the hair is off the shoulders it can easily work on the guys too. It comes with a hud to change the color on the hair, streaks, tubes and rings. The face applier by Tableau Vivant is the beautiful pale Minos that was released for Halloween. I used the Mort Vivant skintones for body and face, but you can go even paler using the Horror skintone. The Minos style several different eye makeups and brow or no brow options. (Also I want to remind people again you can pick up Mort Vivant and Horror body tones for the Slink male body also. The hands and feet applers are included.) Of course I had to use this badass Spider eyepath gacha by Silvery K for my spider guy. Its mod so you can adjust it for your face. The Arya Nipple rings are by Kibitz. It comes with a hud to match skintones with your avatar. Meva has excellent Tudor style gacha, I love the heavy metal feel of it. The Ruff is from that gacha. The facial piercing by Haus of Darcy are on sale for a deal right now at Tengoku no Rakuen furimaketto. The Hades chest tattoo applier for TMP by Fallen Gods works perfectly. Love it! While looking around in the marketplace I discovered these wonderful sheer lip tint TMP appliers by alaskametro. The purple lip works great here. 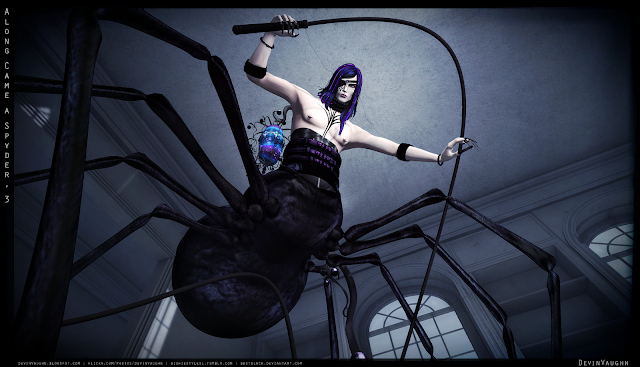 (click to enlarge)
More excellent goodies from Fantasy Gacha are the Heavenly Lantern Staff staff by Zyn. The Angel Claws in black are by Arise. (Note: You may need to edit the nails for best fit on whatever hands you use.) The Chaos bracelets for men is by Elysium.  And now the other things I used to complete this outfit. For the transition from spider body to torso, I used the Dark Prophet Designs Abdomen Belt II Tech, and an latex catsuit applier for TMP by Belle Cherie. Its meant for girls, but since it stops below the chest, I don't see why I cant use it too. lol The armbands by ImmateriA were a gift from the Nightstalker hunt. This whip is badass, and its even more badass since its based on Castlevania's Trevor Whip and includes the pose too. You can pick it up for free at Last Ride.

Posted by Devin Vaughn at 10:39 AM No comments:

Along Came a Spyder, 2 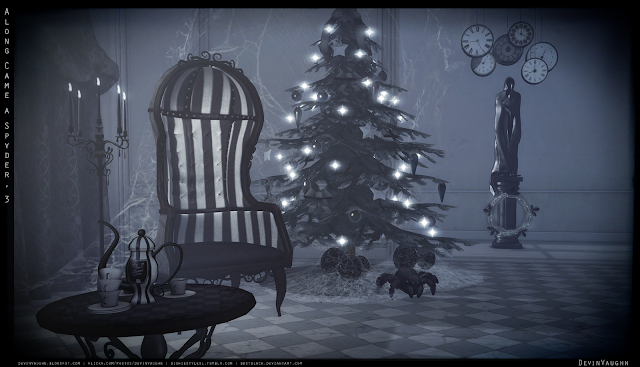 (click to enlarge)
STORYLINE: A blizzard raged in the City That Never Sleeps. Unseen to those struggling against the wind and snow drifts was a billowy shadow moving across the towers. His time was fast approaching. The penthouse over looking Central Park was a secret pleasure the ghost enjoyed returning to each year. It had been an easy task for him to create wealth, afterall foresight had it's perks. As he passed through glassy facade of his abode he was shocked to discover giant cobwebs covering everything. Below his dusty Christmas tree was a nest of giant spiders eggs guarded by a mutant spider. The distinct scent of a blood drinker hung in the air. He had not foreseen this! Who dares trespass on the Ghost of Christmas Future!

Don't hate me for sneaking in a Christmas theme post before Thanksgiving! lol  ...This image is inspired by the awesome Death Row Burton theme decor and the Nomad Gothic Diva gacha. I love the Burton Clocks, the hands spin wildly around on all the faces, both front and back. I put them with the Abstract Sculpture by Nomad, that has a very Ghost of Christmas Future vibe! On the pedestal, I used the new Wood Wreath by ASO on sale at the Creator's Collection Box. I tinted the holly very dark for a more gothic feel. The current round of CCB has a lot of cool Japanese New Year theme items and Christmas, as well as gifts.  The striped chair by Death Row comes in adult and pg versions, and has hud to change the texture patterns on the chair (black, white, striped, or checkered). The Death Row Burton table also comes with a texture change hud. On top of the table is the Death Row burton tea set. The Candelabra is from the Nomad Gothic Diva gacha. The gorgeous curtain hanging in the window is by Papermoon. It was a gift from the Nightmare event. The mainstore has other color and textures in the curtain for you to scoop up (I hope to see a gothic color theme set for the curtain set in the future!) The Christmas Tree is by Dysfunctionality. It can change color theme and it only 2li. It's also mod, so I tinted it for a more dusty look. Also tinted are the Botanical Spider Eggs under the tree. And the cute little Spid-eek is by Silent Sparrow. He's animated. All the cobwebs are from the Death Row Mystery Mansion gacha. The skybox is a beautiful new release by Haikei on sale at Kustom 9.

Posted by Devin Vaughn at 5:21 AM No comments: 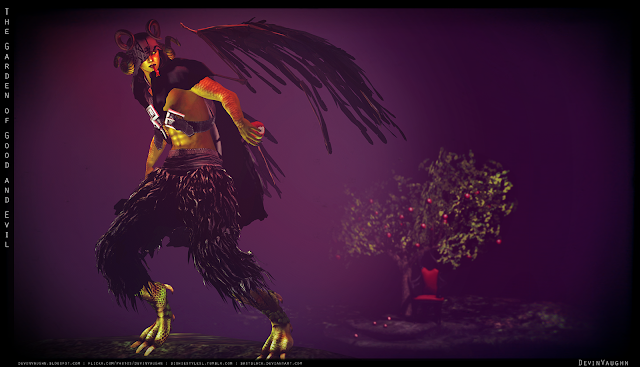 Posted by Devin Vaughn at 6:27 PM No comments: