The End of Summer 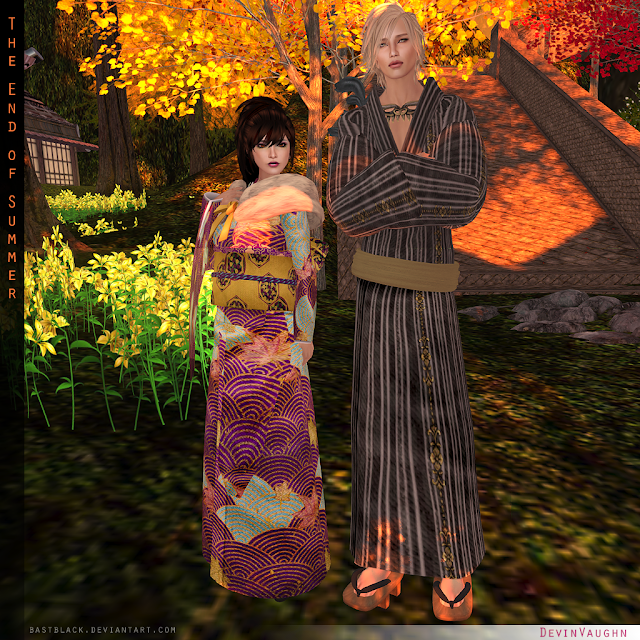 (click to enlarge)
It's that time of year again, a cooler nip in the air, and the leaves begin to turn, but there is still time to wear your yukata a few more times.  Here are some nice things from the "If I Were Rich Hunt" picked on the last day. Rush to get yours! 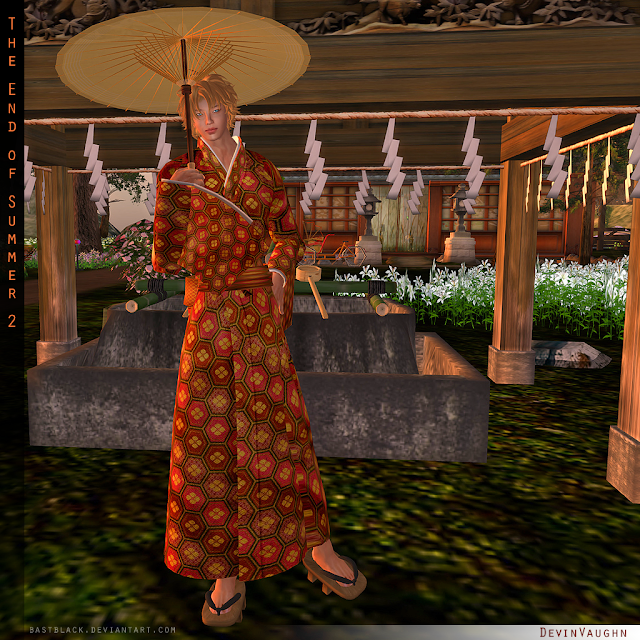 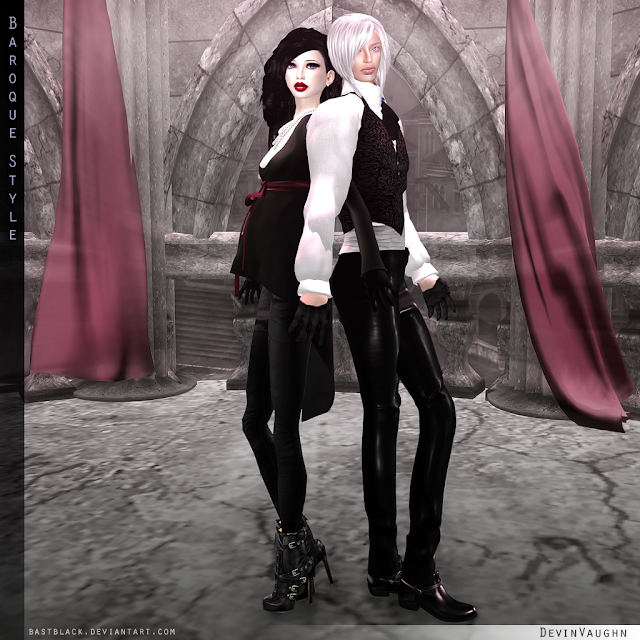 (click to enlarge)
The Collabor88's one year anniversary is this month with many participants from the past year returning for the celebration. The theme for August is Baroque. Being a fan of Baroque style, of course I had to go see it. The sale has ended, and now you pick up these items at the main Tableau Vivant store.

Posted by Devin Vaughn at 12:33 PM No comments: 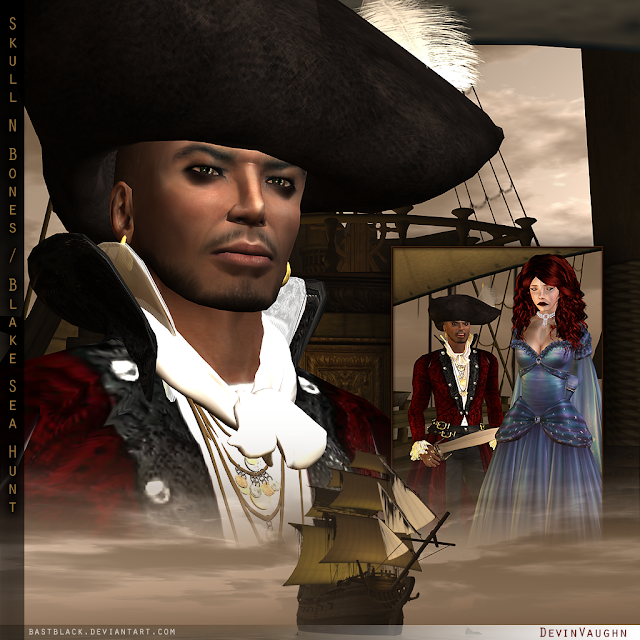 Don't ye rest neither ye "Gentlemen of Fortune." Grab ye Hud compass and set sail to The Great Blake Sea Treasure Hunt! Thar be grand treasures randomly dropped, and no limit how long the treasures be out. Aarrr! 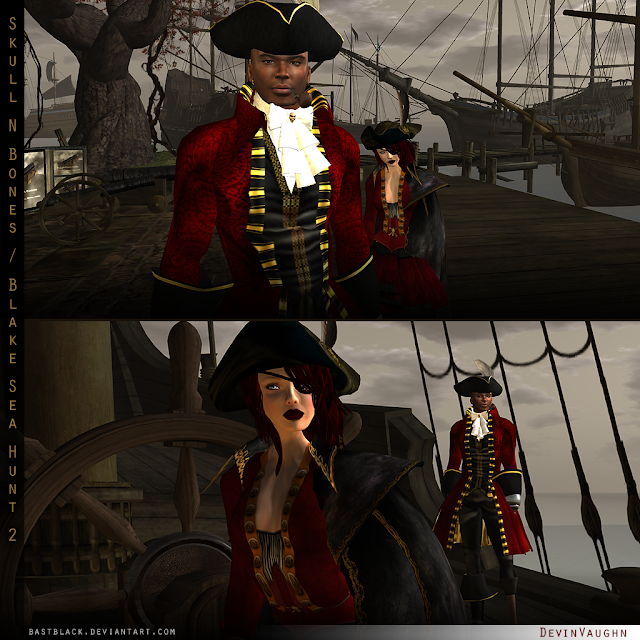 (click to enlarge)
On Black Caesar
1700s. Black Caesar, according to traditional accounts, was a prominent African tribal war chieftain. Widely known for his "huge size, immense strength, and keen intelligence," he evaded capture from many different slave traders. Caesar was finally captured, but escaped into Florida Keys and began a life of piracy. For nearly a decade, he raided shipping from the Florida Keys and later served as one of Captain Blackbeard's chief lieutenants aboard the Queen Anne's Revenge. Caesar's Rock, one of three islands located north of Key Largo, is the present-day site of his original headquarters and named in his honor.

On Red Lady Veronica
1500s. One of the most cunning pirates of the sixteenth century who never revealed her identity. She commonly disguised herself as a singer or an entertainer to be brought on ships and once the crew ever advance on her or leave her by herself she would take her disguise off having a top, pants and her weapons underneath. She would then immediately kill all aboard the ship and sail to sea.

Location: Blackspot Shipyard
Thanks for your help Fulli!

Posted by Devin Vaughn at 7:12 PM No comments: 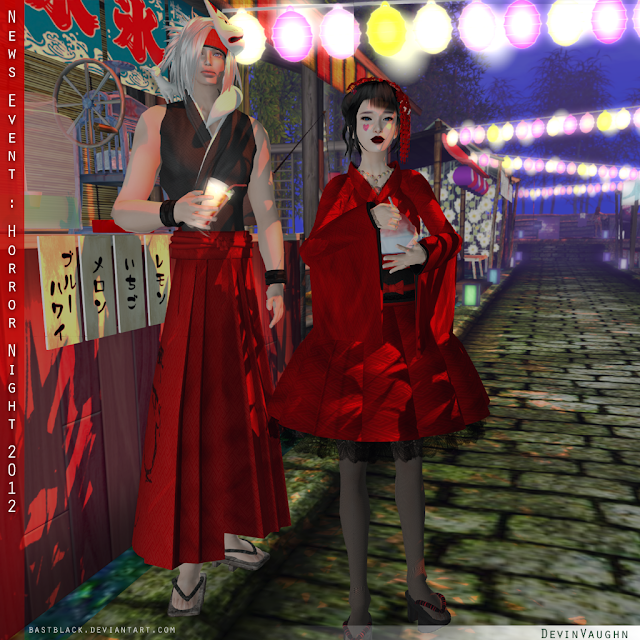 (click to enlarge)
The 5th and final Horror Night is going on now until September 15th. This brillant must-see event is like a "Japanese Haunted House," based on the Obon Festival a time of year when the ancestors are honored, and Hungry Ghosts are lurking near. You begin your journey into the supernatural in upper shop area. There you can buy interesting limited edition event-only items, and get free shaved ice or icky kabobs like rat and caterpillar! Stores in the upper shop area are: 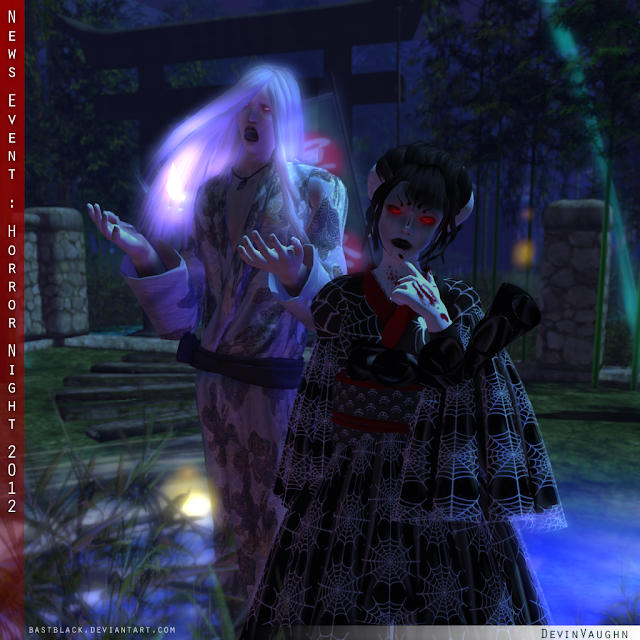 (click to enlarge)
Once you reach the end of the upper shop area, take a mask. The mask will act as camouflage to trick the ghosts into thinking you are one of them. Have a good adventure! For more information on Horror Night 2012, go to:  Horror Night Special Website

UPDATE: There are 3 possible endings: Bad, Normal, and Good. Each ending gives a different prize. And don't miss the two  freebies in the upper shop area: Drop T-shirt for the guys DROP Group Gift Tee, and a swimsuit for the girls from Hare HARE/Swim wear. 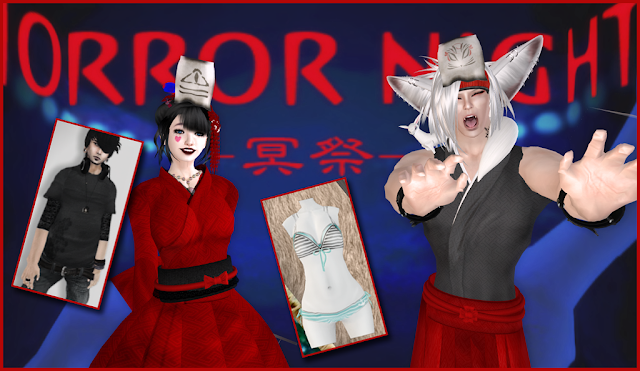 Thanks for your help Fulli and Voodoo!
Posted by Devin Vaughn at 7:37 PM No comments: 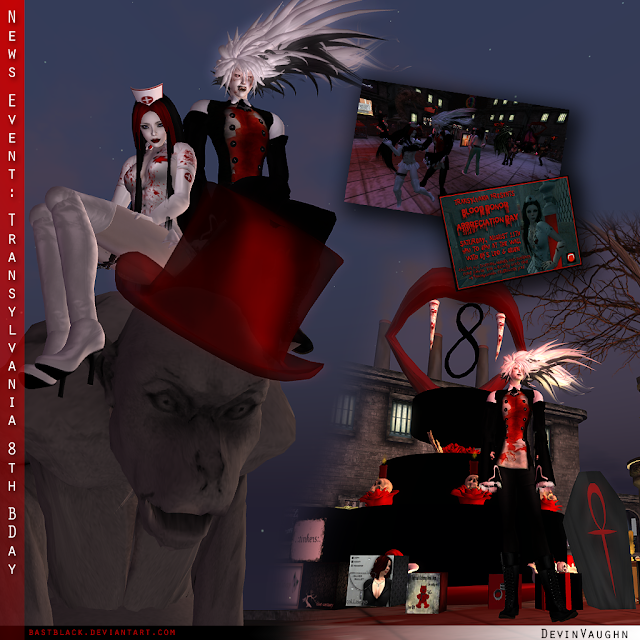 (click to enlarge)
There was no way this mad scientist and his lovely assistant would miss Transylvania's 8th Birthday Bash "Blood Donor Appreciation Day." A good time was had by all, even those that slipped on the blood covered dance floor. lol. The Birthday Bash continues Sunday, August 12th, for the 6th Annual NOSCARS 6pm - 9pm SL. This red carpet formal award ceremony is the most popular event of the year with statues awarded in such categories as "Best DJ" and "Shark Bait." Monday, August 13th, is Transylvania's all day Birthday Bash with all of Bloody's DJs spinning tunes throughout the day. Join the fun: Transylvania Turns Eight. More information at vampyrempire.com. Happy Birthday Transylvania!

To help support the sim and keep it going strong another year, the following generous gothic content makers left under the giant black birthday cake Blood Donor Appreciation Day Gifts for financial (aka "blood") donors to the sim and party goers. Awesome!

Location:
Transylvania Turns Eight
Thanks for your help, Fulli!
Posted by Devin Vaughn at 3:47 AM No comments: 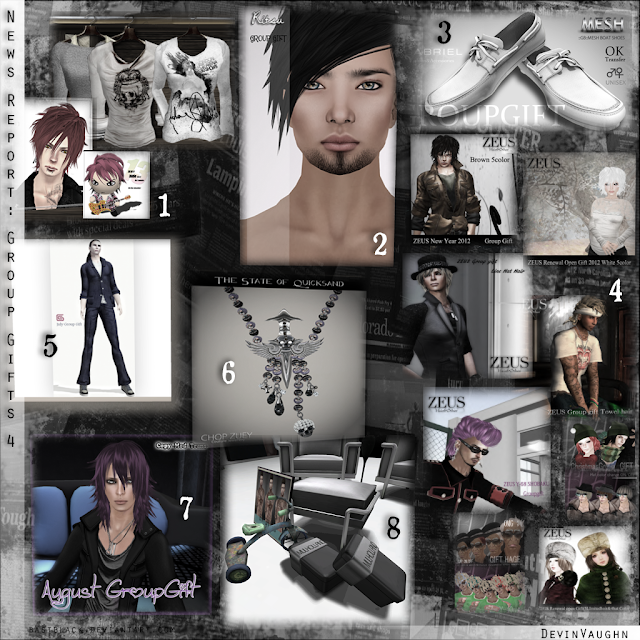 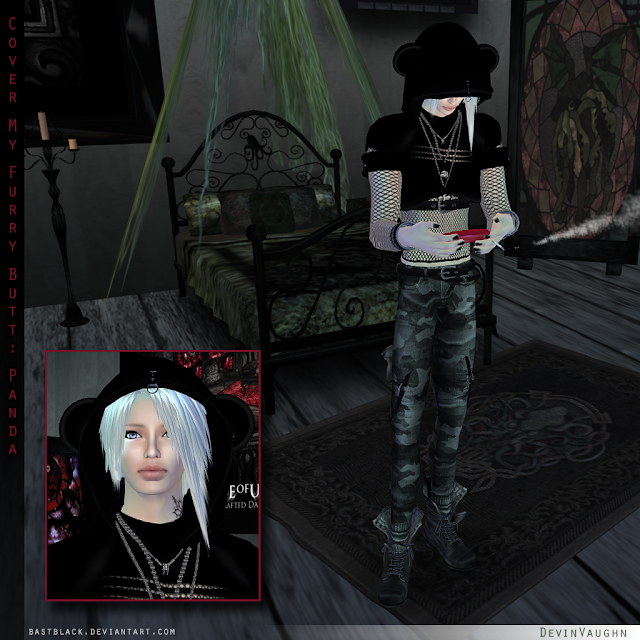 (click to enlarge)
A favorite store of many femboy and male fur is Fiction and Chaos. I'm happy to report the Cover My Furry Butt 2 hunt item is still available. Run go get it!

Posted by Devin Vaughn at 10:36 AM No comments: 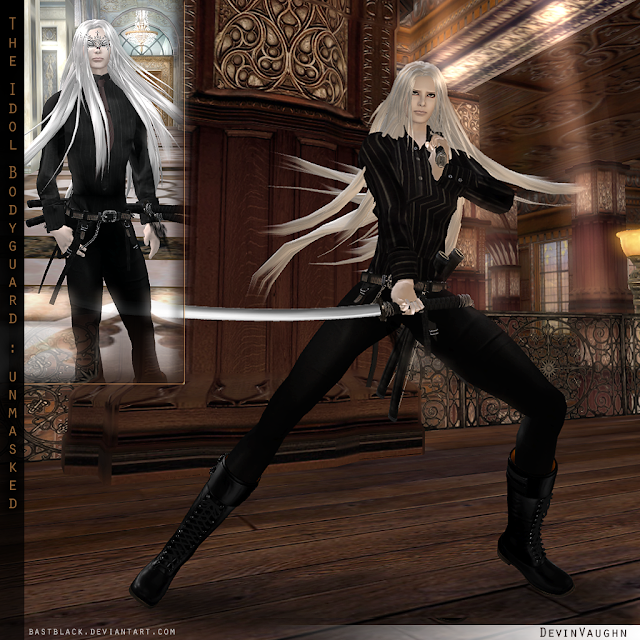 (click to enlarge)
When a popular gothic idol's life is threatened, a deadly pale bodyguard comes to her rescue. 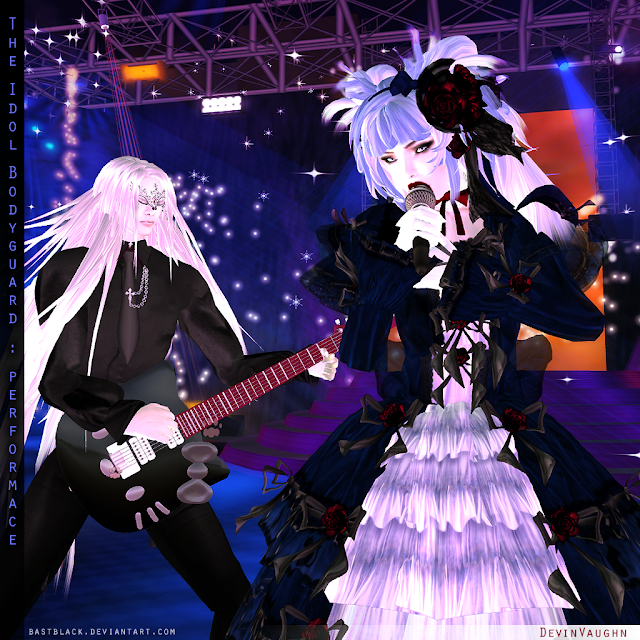 (click to enlarge)
Who is this mysterious protector? Will she fall in love?

Location
Stage Concert professional Furr Burt (7,900L) (you can demo and make your own lighting design!)

Thanks for your help Fulli!

Posted by Devin Vaughn at 3:08 AM No comments: