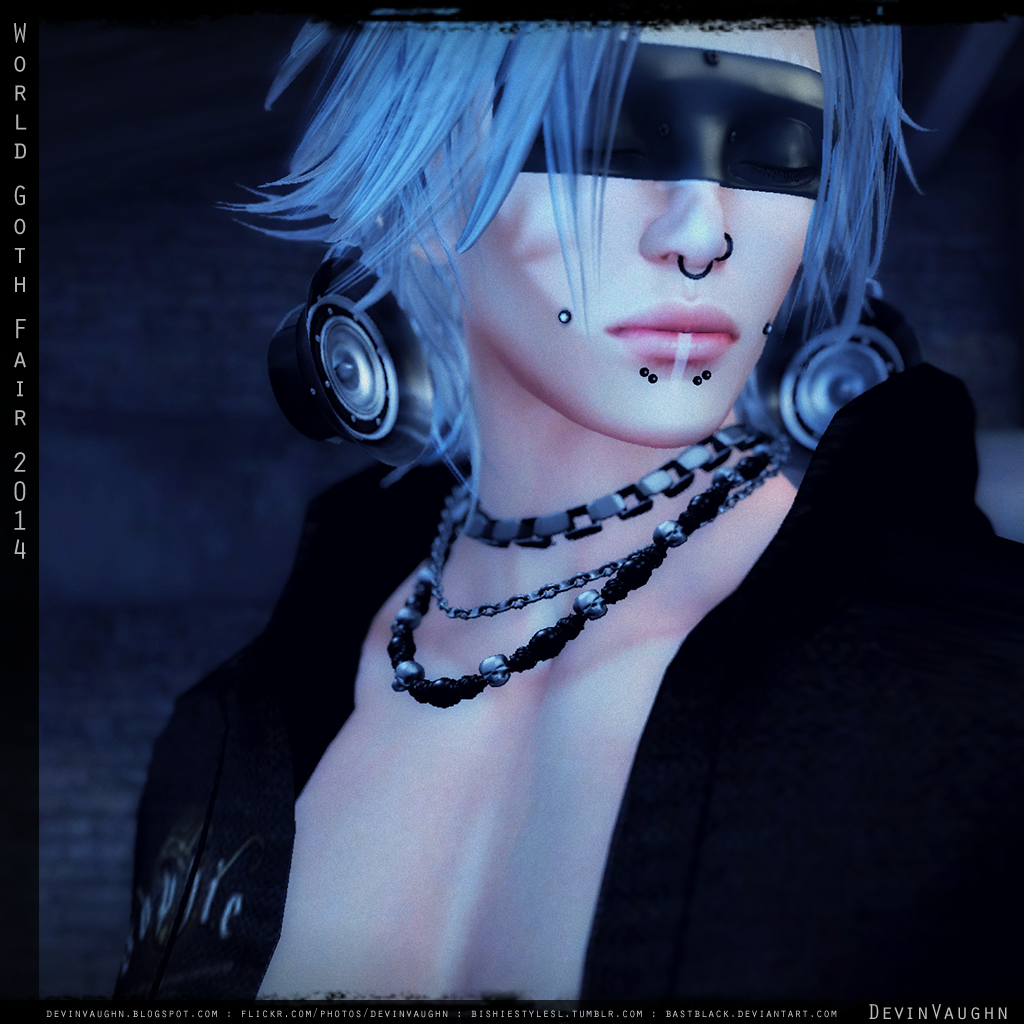 (click to enlarge)
Happy World Goth Day gang! There are news stories all over the net about it, parties are going on in major cities, and very close to the epicenter of this growing holiday is SecondLife. Yes, you read that right. Because one of the founders, DJ Cruel Britannia, also spins the tunes here in SL at Club Gothika. Something truly special is going on. The real and cyber have merged and compliment each other. People who love gothic music and fashion but don't have a local club to go to or a concert to attend, can meet up with like-minded folks from all over the world and celebrate together live in virtual space. Earlier in the day, goth celebrity Raziel Panic, of You Shriek, dropped by Club Gothika. Yesterday Jasyn Bangert, of God Module welcomed everyone to SL's World Goth Fair in a short Youtube clip. JP Shea, of the JesusClever, returns this year to celebrate with everyone on WGD. This morning CruxShadows gave a shoutout of the good things going on at WGF raise money for S.O.P.H.I.E. Last Friday, Jordon Reyne performed live at WGF and donated her tips to S.O.P.H.I.E. With all this excitement and everyone wanting to make a positive difference in the world, what better way to celebrate than get the officially licensed hoodies from 35 awesome gothic and industrial bands! 100% of the proceeds go to S.O.P.H.I.E, (Stamp Out Prejudice, Hatred, and Intolerance Everywhere). 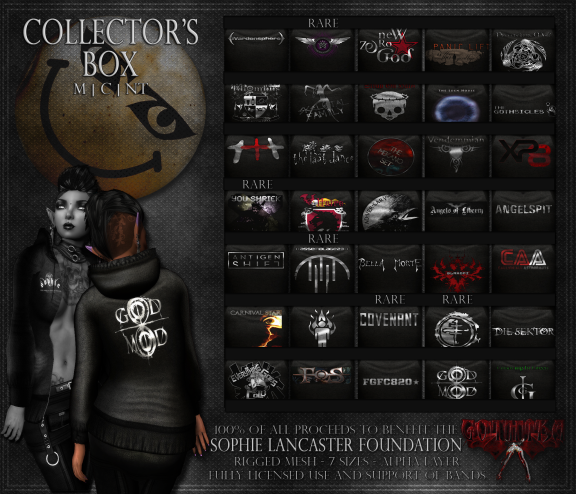 The hoodies are created by Damien Fate (FATEwear). Sizes by Nephilaine Protaganist (PixelDolls, House of Rain, GALLACTIC, The Muses, Leto, Volstead, Pale Empress and Geometry). Textures by Lokii Violet (MV, Club Gothika). Licensing by Axi Kurmin (House of Rain, Beautiful Freaks, Pale Empress, GALLACTIC, Club Gothika) & DJ  Cruel Britannia (Club Gothika). There are 35 bands, and 35 hoodies for male or female. The gacha machines are located on all 3 sims. Each hoodie comes with an informational notecard that tells you about the band you won. (Who knows, maybe you will discover a great new band this way!) This year the organizers have introduced a collector's pack that contains all shirts, non-transfer, for 5KL. But if you want to take a chance on the gacha, you might win a secret prize there.  Even if you don't know all the bands, I recommend picking up this hoodie because it's nicely made, is limited to this event only which ends June 1st, it's officially licensed by each and every band, it cost only 40L a spin, and all the money goes straight to a good cause! (click to enlarge)
What better to celebrate World Goth Day than meeting with your Goth friends from all around the world, listening to music, and opening up all those cool band hoodie bags? -^

In the top image I am wearing the band hoodie with the S.O.P.H.I.E logo on upper right side. The wonderful Urban Voodoo necklace by Scrubs is available at Dark Style Fair, and you can get it in silver, bronze or gold. It comes with a x,y,z resize script. The cheek piercing by HV are one part of a set for men. When you touch the stone, you can change it to several different jewel tones, I used crystal. The headphone and blindfold are from a Fantasy Gacha by {anc}. The blindfold was a perfect fit. I tinted it darker, and then hid the more feminine upper part of the headphone set. The war paints and second set of piercings are by Haus of Darcy. You can pick them up for 45L at We <3 Role Play. Hairstore Scars is back inworld. I was able to scoop up a few style I was missing such as this one, Last. In the lower image, you can see the cargo shorts I am wearing by Kio. They fit on both girls and guys, come in standard sizes, and one with a deformer for female rear and hip size. My undershirt is by K!ng, my favorite fishnet/skull stocking are by Erratic. On my head is Stella, the limited edition plushie bat from HorrorFest, but you can pick up the normal colors at silentsparrow's main store. My nails are by Dark Passion's Greyscale Koffin Nails you can pick up World Goth Fair. For Bat Blogger Aarya's style card, you can find it on her blog: Dark Phantom. In the center of the picture is a wonderfully dark cake by Aftershok. It's a 100% donation to S.O.P.H.I.E and you find it on World Goth Fair Port Seraphine sim. At the foot of the purple chair is an adorable Bat plushie by Chaos, Panic, and Disorder. There are several theme plushie bat you can pick up such is winter, steampunk, and robot at WGF. The fun coffin holder for my Vampire Vintage wine is by Aphrodite. When you touch the lid, it slides all horror movie-like and then in local chat it makes a boast about its superb quality. Too fun. Touch the bottle and you get these great skeleton hand wine goblets. This was part of a set at HorrorFest that I lost my mind over and had to have it all. lol I don't know if the gacha is still available, but I gave a link the main store in the credits below. The giant cartoony bat and the two cute Bunnicula are by the power duo Beetlebones and OhMai. They were prizes from of the brilliant Nuville inworld theme park. Chairs by Trompe Loeil, one of them is tinted purple. This gorgeous skybox has become my new home. I love it! It was part of a Facebook Like gift offer from Trompe Loeil, but if you missed it, don't worry. You can these wonderful all mesh skyboxes at the mainstore for 250L in light or dark. They come with materials, projector lights, and it has a low land impact.