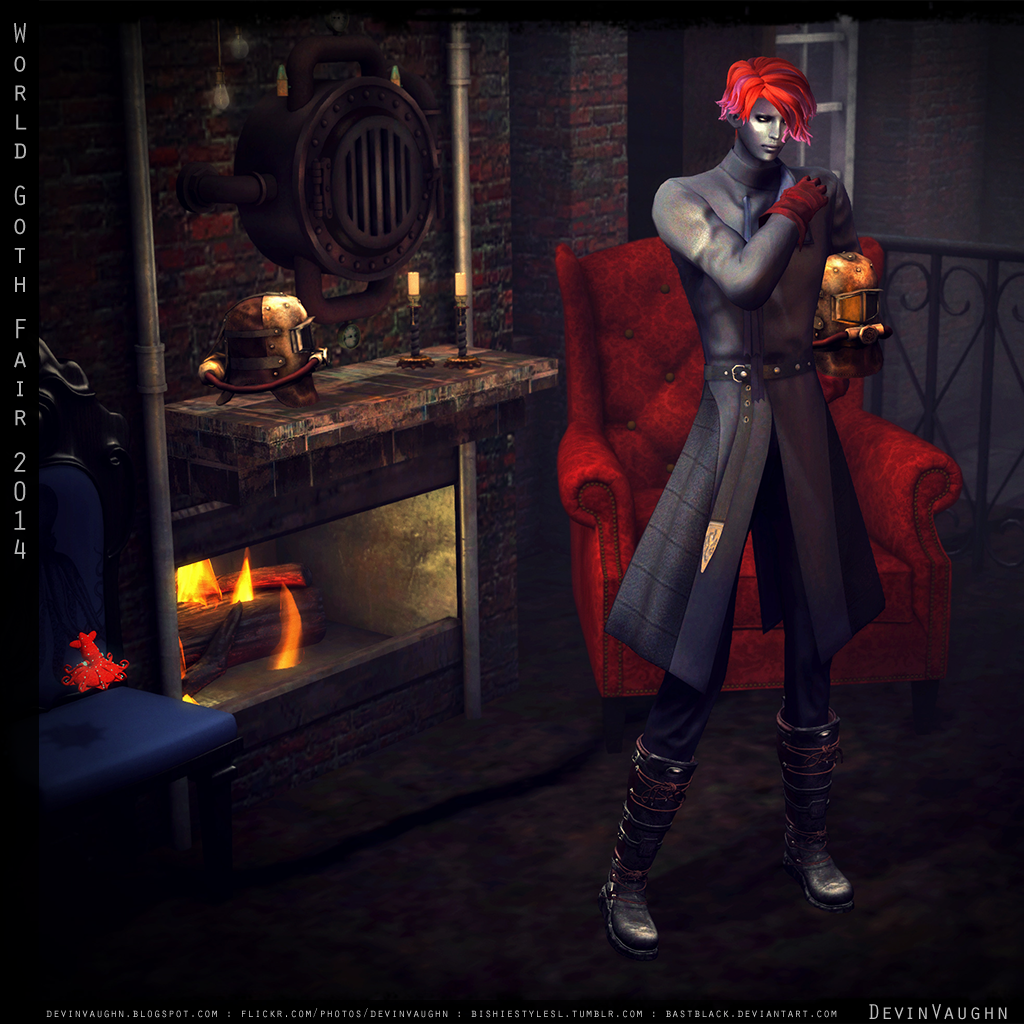 (click to enlarge)
STORYLINE: The Elders were worried for the safety of the visiting humans during the celebration of World Goth Day. Patrolling the sea would be the Navy of Cursed, The Vampire Squids.

Time is running out to scoop up the awesomeness. Over at We <3 Role Play can you get this excellent Nick Belt Coat outfit from FATEplay for 25% off in white or midnight colors, and the Dueling Gloves. The gloves come with a color hud, and the ability to have hands open, closed, long cuff (like I used above), or short. The Vampire Squid is wearing an AMAZING skin by Pink Fuel that that fills all your Drow needs for both girls, femboys, and guys. It has tintable eyebrows and every applier you will ever need! (Slink hands/feet, Lola, Lush, Puffi, loud mouth, phat/cuteazz, ghetto booty. wowmeh, and perkies) Femboys might have already have tried and worn the Pink Fuels skins but those of you new to this let me explain how it works. You wear the normal girl skin, than choose either Boi or Athletic Boy tattoo later. This replaces the female breast and groin with a male version. What you end up with a lovely angelic male. This means the skin can be worn on either a male or female base avatar. If you want to give it a try, check out the demo! For the image above, I am wearing my normal male shape, but I have used the Boi version of Pink Fuels on male-on-female-base in the past.  This new Drow series is even better then the past Boi styles! Contraption has a cool helmet at We <3 RolePlay that's great for wearing while shoving coal in your steam submarine engine, or just decorating your unground lair and looking cool! On the wall is a Steam Furnace from Ravenghost. The detail and style of his work is wonderful. In the gacha area of WLRP, his Steampunk Luminaires has returned! I was so happy to see it was back and gave it another try. Good thing I did because I won the rare! Woot! From the Fantasy Gacha, is the mesh Victory boots for men by Yasum. Don't miss these! From World Goth Fair, I am wearing a cool light red to purple hair color from the Declan hair for men by Damselfly. While you are there, be sure to pick up the free Damselfly gift for men and women. The red-orange wingback chair comes from the WGF Salon Set by Nacht. It comes with matching couch, chair, and table and it's a 50% donation. To the left is the Graphic Chair Octopus by Bauwerk. It's editable mesh so I gave the chair a tint to match my color theme. I did something even more crazy with Bauwerk's nice Gothic Gazebo, I combined it with the Skybox by Trompe Loeil! Each section of the Gazebo is editable. It's really beautiful on its own but if you need to, you can also transform it like I did!