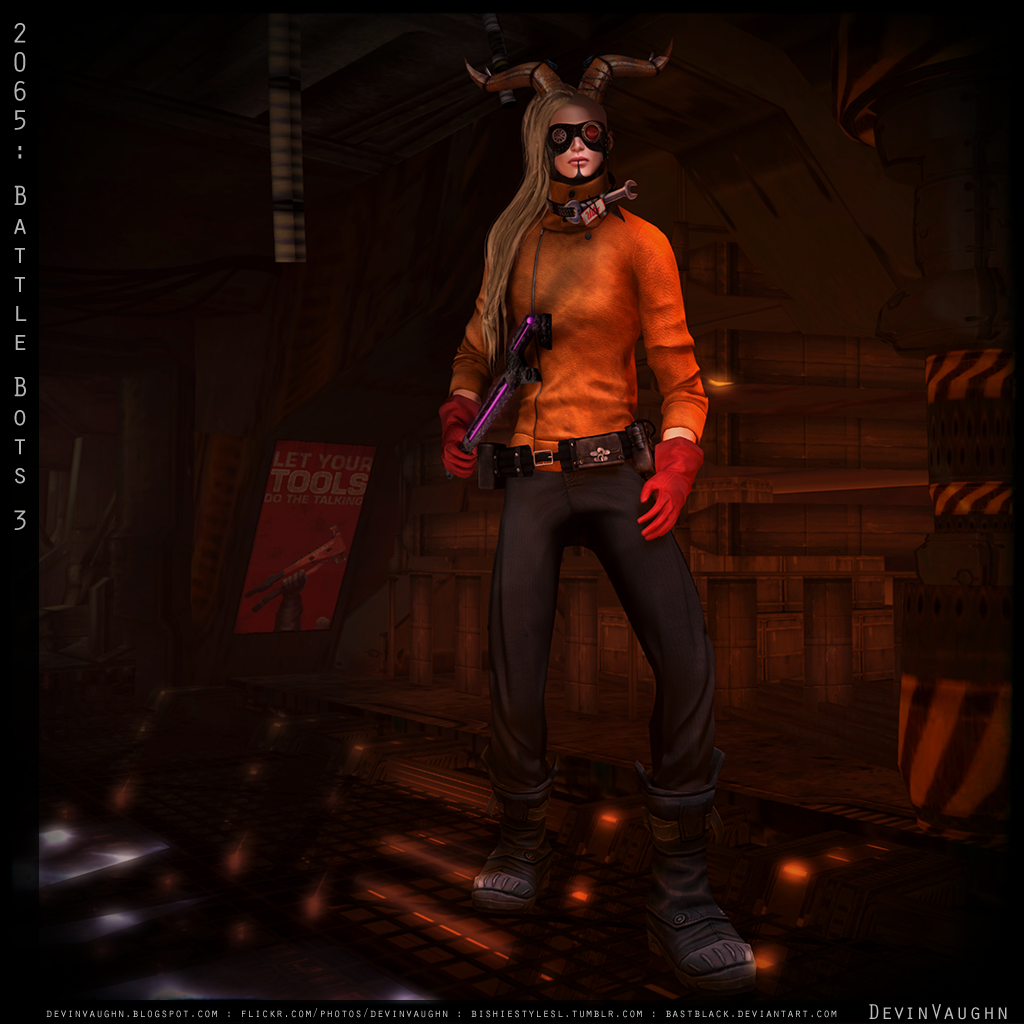 (click to enlarge)
STORYLINE: Was it a crime he loved his creation? Did it even matter? His EVA saved him, raising him up from a dull job repairing cargo ships to The Boy Genius of the Battle Bots. Sure she didn't have thoughts or feelings. He couldn't allow an AI to develop a conscious and suddenly loose the will to fight. She did what she was programmed to do. He lovingly slaved over her, pouring his soul into her design. She was so beautiful. He didn't know what he might do if she was ever defeated. Seeing her body broken and "lifeless," he might go insane and kill her murderer.

Did you go get the Deco shoes on sale for 50L yet? The sale ended on the 11th, however I was just there and prices are still marked at 50L! Run go get the goodies now before it ends! Pictures above are the cool Coalcracker boots by Deco. Mr GearGeek is sporting the new CogWorth Horns from Remarkable Oblivion available at The Secret Affair. The horns come with steam or no steam, materials or not. Each horn is separate so you can move them around, and like all RO things, it comes with x,y,z scaling menu. The Mechanics Bow Tie collar is also by Remarkable Oblivion. Tableau Vivant has a new hair n their Dreadlocks series, Darcy, at  Hair Fair 2014. It includes their Dreadlock texture colors. The goggles another steampunk theme creation by Eudora 3D available at We <3 RolePlay. It comes in several different colors, and it has a hud to change the lens color. Also at We <3 RolePlay is the wonderful utility belt by Death Row. I have been wanting a good tility belt in mesh for awhile now, and Death Row had now released nicely made one for girls and guys and it's steal at only 50L! The Shotaro jacket is a past release by FATEwear includes materials, as well as the Dueling Gloves by thier cosplay brand FATEplay. The Dueling Gloves come with a texture change hud and options for open and closed hands and cuff or no cuff. Deadwool currently has the Joad pants on sale at the discount at The Men's Department, however I wanted a plain black style instead. The pants come in 3 length options and worked perfectly with the boots. It's so hard to find good pants that work with boots! Once more I am using the handy Yumyuns cyber Wrench. You never know when you will need them. Hey, let your tools do the talking! 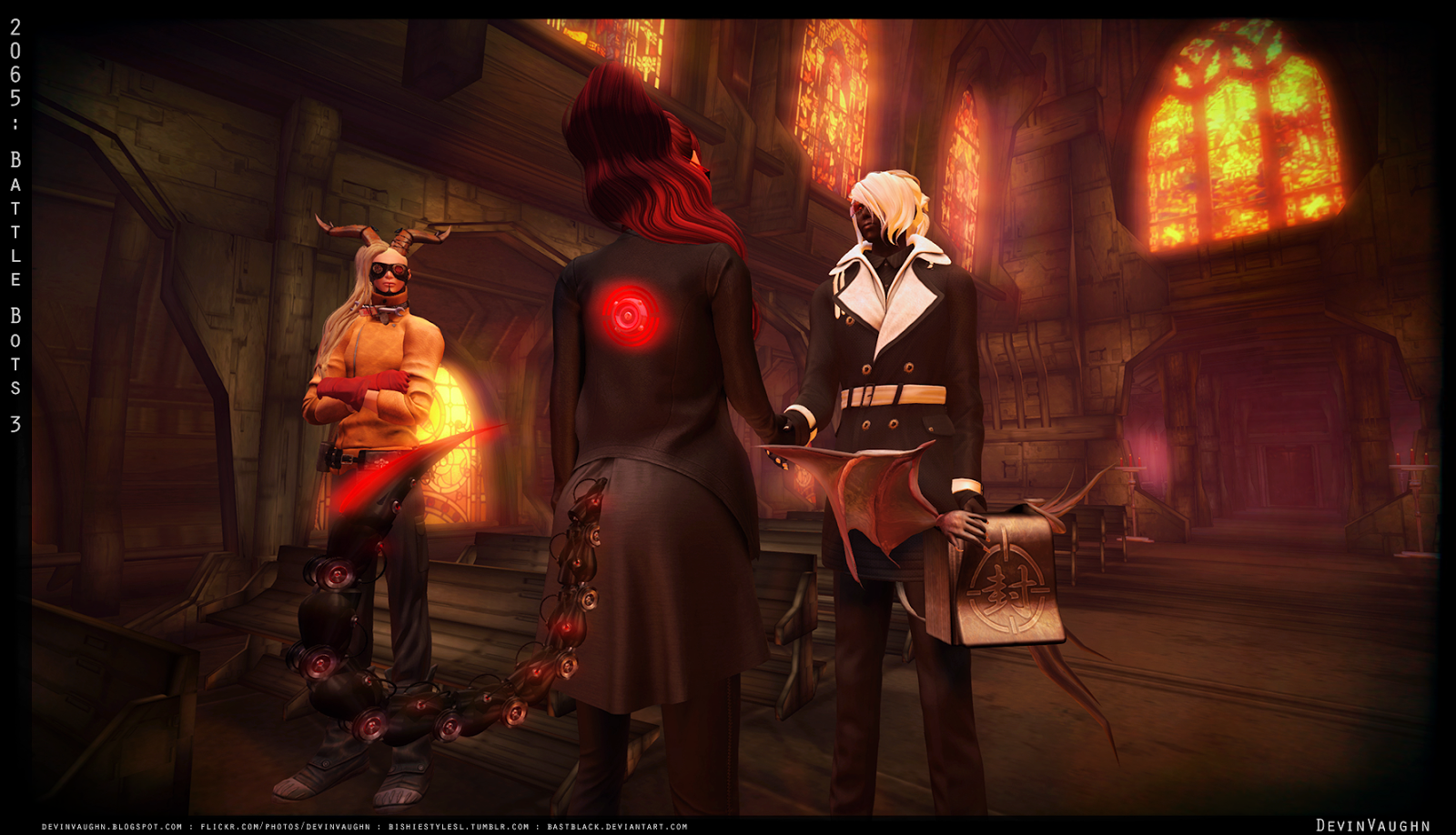 (click to enlarge)
STORYLINE: As the date of the battle drew closer, the frenzy of betting against ex-A.N.G.E.L reached a fever pitch. The bookies hadn't seen this much action in years. Tickets to the match were sold out. People wanted to see real gore for a change. Just how vicious could a desperate vampire be? Wouldn't a bolt, bright as day, end the match before it even started? Or would the vampire surprise them with strange powers, such as regeneration? ... The night before the big match, Kujo's right hand man, Nocturne, called Team EVA's manager and requested a private meeting at the Church of the Damned. EVA's creator insisted he come along. He had a bad feeling about this; nothing in this city happened without Kujo's approval. He watched, his displeasure blatant, as Nocturne offered a bag full of something to his manager Octavia. It must have been very valuable too, since it had a demon protector.

Kariritaisho returns to the blog as Team EVA's manager and er partner Remmock join the photoshoot playing the part of Kujo's agent Nocturne. They were both a joy to work with. Thanks so much to Kariritaisho and Remmy! She is wearing jacket and pants by ISON. The Asymmetrical jacket comes with a hud to change the undershirt color. The Lux hair by Spellbound is a brand new release. Her killer Mech Scorpion Tail was an old lucky board prize from Bunnystar, can you believe that? It's awesome! Her discs and glasses are by Graves. For the handshake pose, she used a hud you can find on the marketplace for only 40L. He is wearing the jacket and shirt Louie by Cool Nerd and it comes with a texture hud to change the shirt. His Blame hair by Magicka is one of those brilliant styles that works great for guys and girls. The satchel is another badass raffle prize from BareRose. Raffle prizes are transfer so if you go there to win one, make friends with other Raffle hunters and trade. His visor is a free gift by Bluecross and it comes in several colors. His nail polish is a gift from A:S:S. And his skin is by Aeros. You can't see the Baenar skin too well in this picture, but trust me when I say it gorgeous. I like it al ot. Hop over to the Aeros store and you can pick up Slink hands, feet and nail appliers for Baenar. These pictures were taken at The Doomed Ship which is one of the coolest RP sims on SL. I was very happy it's still around even if it's now PG rated. When you get to the core, it's a brand new ending too.