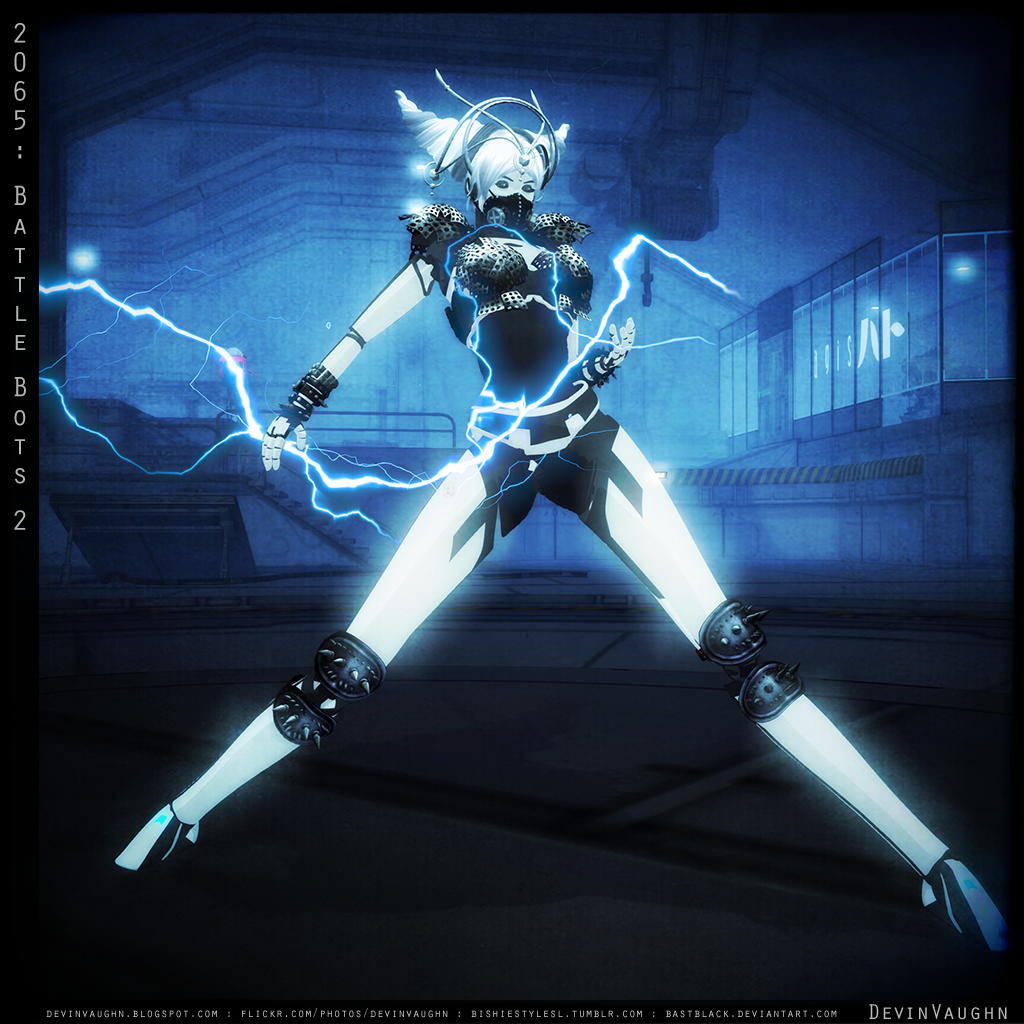 (click to enlarge)
STORYLINE: Battle Bot EVA was an unlikely champion. She was once an ordinary domestic android, more suitable to feather dusting then robot wasting. Her owner bought her on a lowly GearGeek's budget and lovingly turned her into a deadly bot killing machine of beauty. Her joints were upgraded to reinforced carbon–carbon. Her feet stuck magnetically to anything metallic including walls, floors, ceilings, or other bots. And perhaps her most innovative modification was a skin made of teflon, the most slippery substance known. She was one hell of a small, fast, slippery bar of soap that could deliver a 100 million volt faster then you can say, "Don't Tase Me Bro."

The second I saw LNS's Eve Seven android at The Co-Op, Nexus Event, an idea for a new Scifi series hit me! lol She is a shiny bright complete mesh avatar. I couldn't resist hot-rodding her out. She wearing LNS's Nephrenia hair available at Hair Fair 2014. It comes in two pieces, the hair and headdress. You can pick up one of the color packs for normal price, or get the promo pack with pink and purple colors for only 47L. Hair Fair is one of biggest events of the year in SL and proceeds go to Wigs for Kids. The organizers did a brilliant job once more managing all the heavy traffic pouring into the 4 sims. Once you land on one of the sim, I recommend you grab a Prim Bus, it's a lag free way to travel. If you can't get into a sim, land on a border sim and cam in to shop or look around. Eve comes with eyes but I swapped them out for the killer Citadel Eyes by Snow. The have cool moving parts and you can adjust the colors via a hud. Her upper body armor is from the new round of The Secret Affair that just opened. Each part is an attachment so if guys want to wear the shoulder, it's not a problem. Her Death Row mask, bracelet, and knee pads came from the last round of Project Limited. The new round is going on and I am so happy to have gotten the DRD burton house (which I will show in another post). The second half Project Limited with all new limited content starts on the 20th.