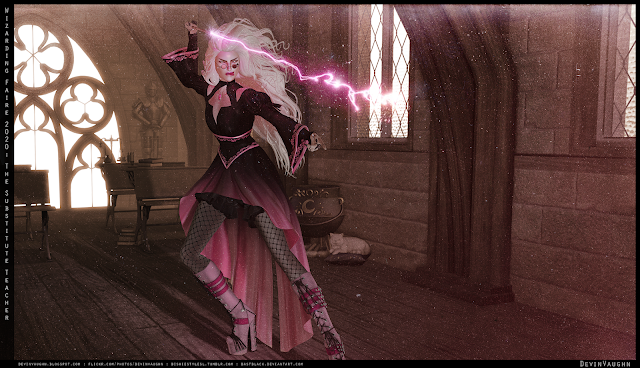 (click to enlarge)
STORYLINE: The class had been murmuring. The Professor for Defense Against the Dark Arts was late. He was never late. Did something bad happen to him? Speculation was rampant until a dramatic kick to open the door made them all spin in their seats towards someone they had never seen before. She had wild disheveled hair, and a spiteful glare. " 'ello Dearies. Care to learn 'ow to not get owned in a duel like Professor Musty Pants?" Fennimore's jaw dropped. Was she a substitute teacher, ....or the reason the professor was missing?

The Wizarding Faire is ending soon. This post was inspired by the Dueling Skybox by Pitaya, the Dueling Wand and hud system by Nishi, dueling pose by Lulustuff, and the Artemis Dress by Altair.  I imagined someone like Bellatrix LeStrange teaching Dueling. Also shown are Thor Wizarding Class set, Random Matters Precarious Plants books, and Foxwood's kitty and Cauldron.