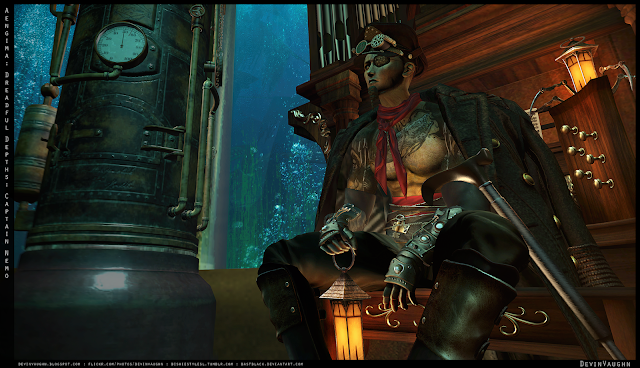 (click to enlarge)
STORYLINE: The mournful sounds of a pipe organ reverberated throughout the metal hull of the Nautilus. Captain Nemo's sour mood was made obvious to all. His submersible ship lay sunk on the ocean floor, wounded by a Kraken attack. They had been so close to finding the lost city of Atlantis! It was frustrating. But Captain Nemo could not be so easily defeated. They would make the necessary repairs and be underway on the hunt in less than a week.

Dive! Dive! Dive!  Last call for the fun underwater steampunk round of Aengima. This image is of course a little homage to the 2000 Leagues Under the Sea. I was inspired by so many great items. The beautiful La Malvada Muder tattoo is lovely and full of interesting water themed elements. The Hat is by KiB designer, and Eyepath and Goatee by Badwolf. From Graveyard is the walking cane. And from Static are the whimsical animesh  Nightmariner Lanterns. They are so fun to watch, but also come in a hold version and static props.