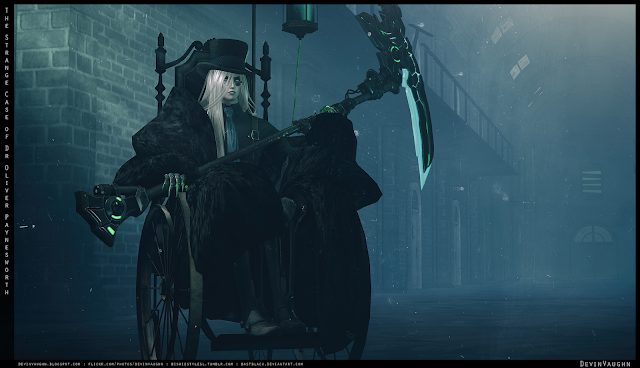 Death Row Designs will be delivering another fun gacha and hunt for Halloween this year. The theme this time is Asylum. This is my entry to DRD's the "Join the Family" contest. I brought out one of my favorite asylum dwelling characters. Enjoy. Style Credits below the story.

It had been an ordinary day at the Rosewood Asylum when the town’s respected general practice doctor, Dr Oliver Paynesworth, strolled past me without a word, not even a Hello, and disappeared down the long of hall of Rosewood’s worst behaved residents, otherwise known as the "inmates." Of course I went to fetch him, since we don’t allow visitors to that wing of the asylum.
I discovered him in the oddest place. He had taken the last room to the right and barricaded the door with the back of a chair so that I could not open it. I looked through the glass peephole and saw him, just sitting in the middle of the room on the floor with a vacant look in his eyes.
“Excuse me Dr Oliver, What are you doing? Is there something wrong?”
He didn’t look at me as he said in a hallow voice, “I am admitting myself. I am a danger to society. Please leave me alone.”
Alarmed, I fetched the director of the Institution. He spoke to the Doctor for some time before he came back out shaking his head. “Nurse, can you please check into this?” He had filled out a form to accept Dr Oliver and wrote that the Dr believed he could kill with a mere thought. He blamed himself for his fiancé’s death after she broke up their engagement. He wanted me to call her doctor to check if the story was true.
Dr Oliver’s case turned out to be a sad example of the ravages of grief, most likely driven by intense regret that his last words to his fiancé were, "I hope you die." Turns out she had just discovered her diagnosis of terminal cancer and couldn’t bring herself to tell him, so she abruptly broke off their engagement without explanation. We figured after some grief counseling, and revealing the truth of why she ended their relationship, he would return to normal. But sadly, that’s not what happened.
One day we found him in a pool of blood. He had cut off his own legs with exceptional surgical skill. What he used, we have no clue, but it must have been a very large sharp blade. We searched high and low for this dangerous weapon but could never discover where he had hidden it. He was ranting on and on about offering his legs to Death in exchange for bringing his beloved back to life.
He had clearly taken a turn for the worse.
We were able to stop the bleeding. Once he had recovered, we gave him a wheelchair and fitted him with new prosthetic legs. I think Dr Rosewood held hope he could save his old friend.
As the months passed, Dr Oliver would sit on the floor, not eating, or speaking…. Other "inmates" requested to be transferred away from his unsettling dark aura. Except one. She requested to be moved directly across from him. In truth, she was here because she was in so much pain her family couldn't care for her. She was often yelling across the hall, begging Dr Oliver to kill her. If he heard her, I don’t know. He was covered in dust by then. Cobwebs hung from his eyelashes too. I thought he was long dead and everyone was too scared to go in and check.
But he was not dead.

The morning on the 19th, I discovered front door of the Rosewood Asylum was open. No "inmates" escaped. No, instead they were all yelling, crying, and cowering their rooms. When I reached the last door on the right, it was open. Dr Oliver was gone. There was no sign of him. I checked across the hall and the lady was still locked inside her room. No one entered, but she was clearly dead. White as a sheet. And smiling.

It was creepy. We closed off that cursed wing of Rosewood. No one ever did see Dr Oliver Paynesworth again. The only clue we had as to what became of him was a note left on the floor.

Thank you for caring for me.
It is time for me to go now.
Please take good care of your health.
Your time precious. Don’t waste it.
signed,
Dr Oliver Paynesworth,
Reaper