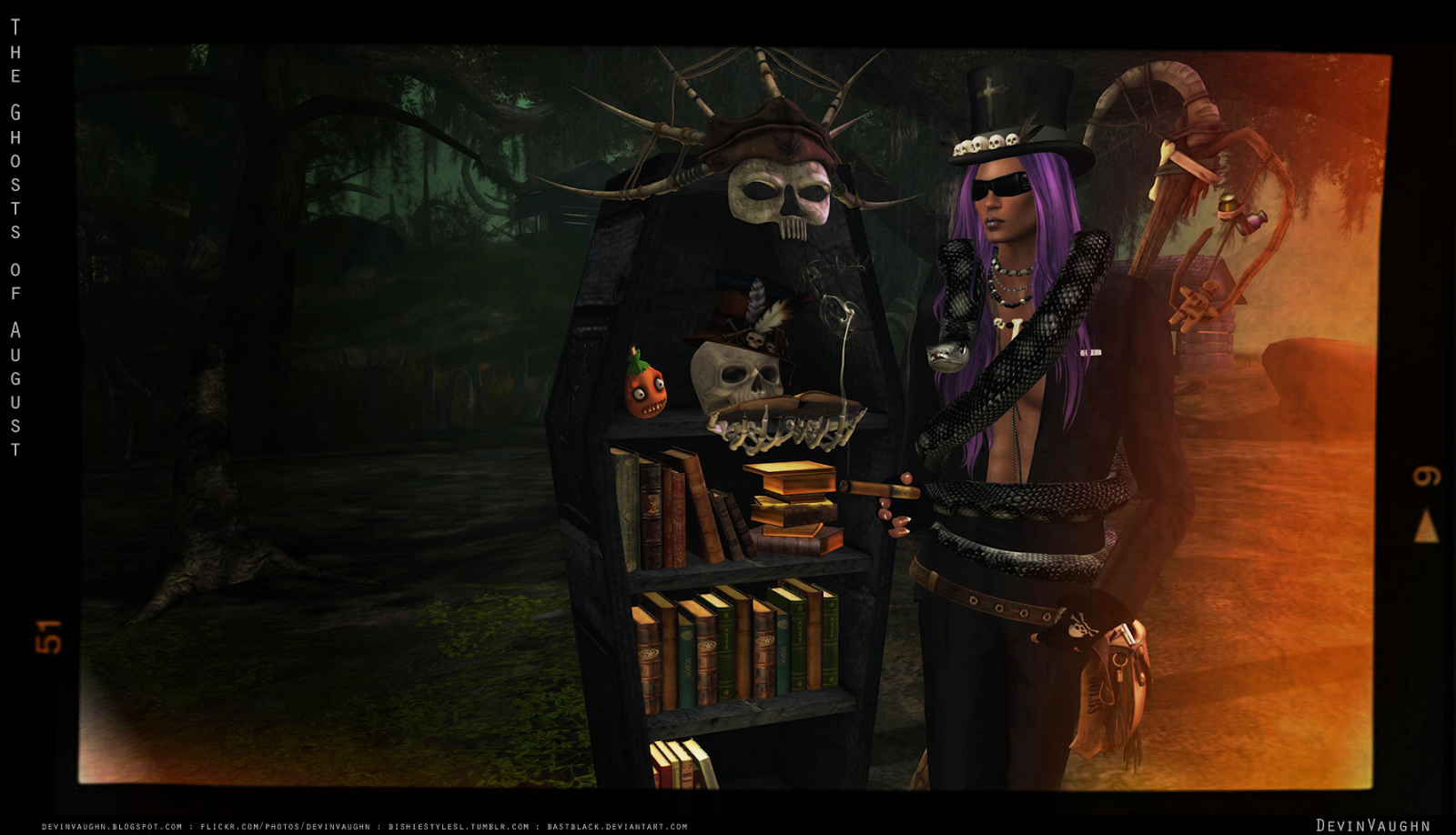 (click to enlarge)
STORYLINE: The shaken schoolgirl was now cursed with the ability to see spirits. It was the price she paid for entering their realm. Still, she hoped the curse would end. She took a different route home to avoid the Possessed Doll. As she passed the outskirts of the US Air Force base, she saw a horrific plane crash. She was glad the pilot safely parachuted down. But something was not right about the strange man in a tuxedo and top hat who stood on the runway without a care. When the firetruck passed right through him, she knew for sure it was a ghost. No sooner had she thought that, then the dark man's head jerked in her direction. He waved his hand, she felt a swoosh of air, then she suddenly found herself in a swamp in some far away place. This ghost must be powerful, she thought. He spoke English, but she could understand him. "A child sees things not meant to be seen. The Baron can not allow this." He handed her a bottle with hot peppers decorating its label. "One drink from that, Cheri, and the walking nightmare will be at end."

I'm thrilled about the theme for this round of the Fantasy Collective, the Swamp! Finally a theme that's closer to home. I live in swampy area and often visit the New Orleans/Baton Rouge areas. Naturally, I am wild for Baron Samedi too, having done a lot of research him for a story. When I saw this badass Baron hat and hair by Tableau Vivant, I did a happy dance! It comes in a male and female version, each hat slightly different. The girl's has a rose and the guy's a cross. The hair is separate from the hat. Going with a witch doctor theme, Death Row has a stunningly cool witchdoctor mask that is perfect for a spooky swamp. It has a matching staff complete with little bottles and a voodoo doll. Over on the Coffin Shelf by Noctis, is the top hat on the skull by Sweet Lies gacha. I won the rare which comes with a texture change hud. Next to it is another gacha from Fantasy Collective, the Shrunken Head Potion Canteen by Eskimo Fashion. The bone necklace the Baron is wearing is part of the BOOM set that includes a Baron mask. The masks come in several colors. For today, the Baron wears his signature dark shades. The sunglasses by Kumaki are perfect for him, they even have skulls on the side. Holding his voodoo dolls or potions is the handy Hipster Bag by Remarkable Oblivion. It's on sale at FaMESHed and comes in 3 different colors. You can resize it with a menu on the x,y,z. From Totally Top Shelf is this awesome fitted mesh snake! YES! There are 4 styles, and each one comes with a texture hud to change your precious snakeypoo's colors. This picture was taken on the Madpea's Green Mire sim. If you do thier side hunt for Evil Bunny, you will score green bunny slippers and a green bunny shoulder pet. You until the 31st to do the hunt.