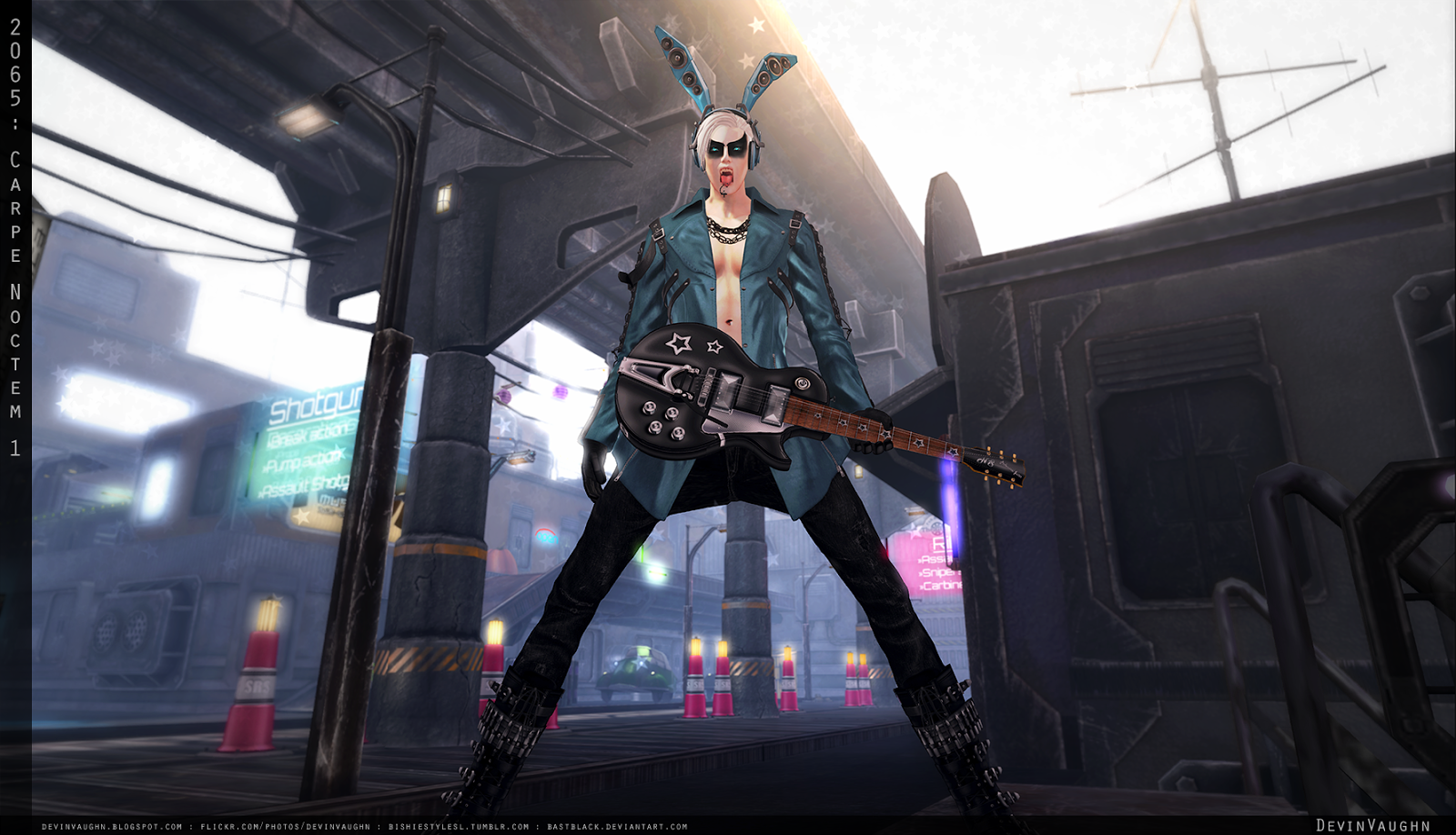 (click to enlarge)
STORYLINE: After successfully escaping the Mars colony, the Cursed A.N.G.E.L. left the protection business and reinvented himself as a rock star named Rab8. He wrote a "romantic" song about a pissed off violent out-of-work vampire who was starving because of the lack of non-genetically hybridized humans until one day a beautiful Eden quenched his thirst. He figured he could seduce some Edens out of hiding with his music. His song climbed to number 47 on the Earth Music Charts. More people came to see him perform. And after he smelled a near-Eden among the crowd, he thought he was well on his way to securing a new blood supplier when disaster struck....   (NOTE: If you guys remember my posts on FutureWave, this storyline picks up where that left off.)

It's Easter Time! Spring! Pollen! Bunnies! And those of you who know me, know I have a thing for bunnies. When I saw the cool new mecha bunny headphones Rab8 by Remarkable Oblivion, my little cotton tail was wagging. They come in either blue or white and you find them on sale at FaMESHed this month. Also going on right now is the Rock Attitude Fashion Fair. I got at the fair this great mesh Les Paul style guitar from NS. It comes with several versions for wearing on your back or holding, but those attachments are really tiny guitars and you can not mod them. I am using the larger one above that contains a pose. For this post I used instead an excellent pose by momomuller. Looking a bit like a Kiss style Kabuki Bunny, I am wearing the Dead of Night creature makeup by Lovely Disarray and kick ass high platform boots Onslaught by Razor. The chain necklace is a group gift from Death Row. On Berry's Dance meme, the Godfather Bat Winter Jefferson danced in this coat and I was drooling so hard. As soon as I knew where to get it, I made a beeline to FashionNatic and scooped it up. It comes with the color hud for many color combinations on straps and fabric, and zipper on or off. Excellent. I love the Simmon's models. The tongue and piercings are a past Rebel Playground hunt gift from Bubblez. The pants are my favorites from Ronsem. They are the best pants I have for boots. From the FutureWave posts for this character, I'm wearing once more the Argrace Arata hair with Action hairbase and Vrsion gloves. The By Snow eyes were at FutureWave also. They are really amazing with beautiful cyber textures that animation and you can change the colors of all the different elements ina hud. This image was shot at the mesh futuristic urban environment at the Sys Corp store.