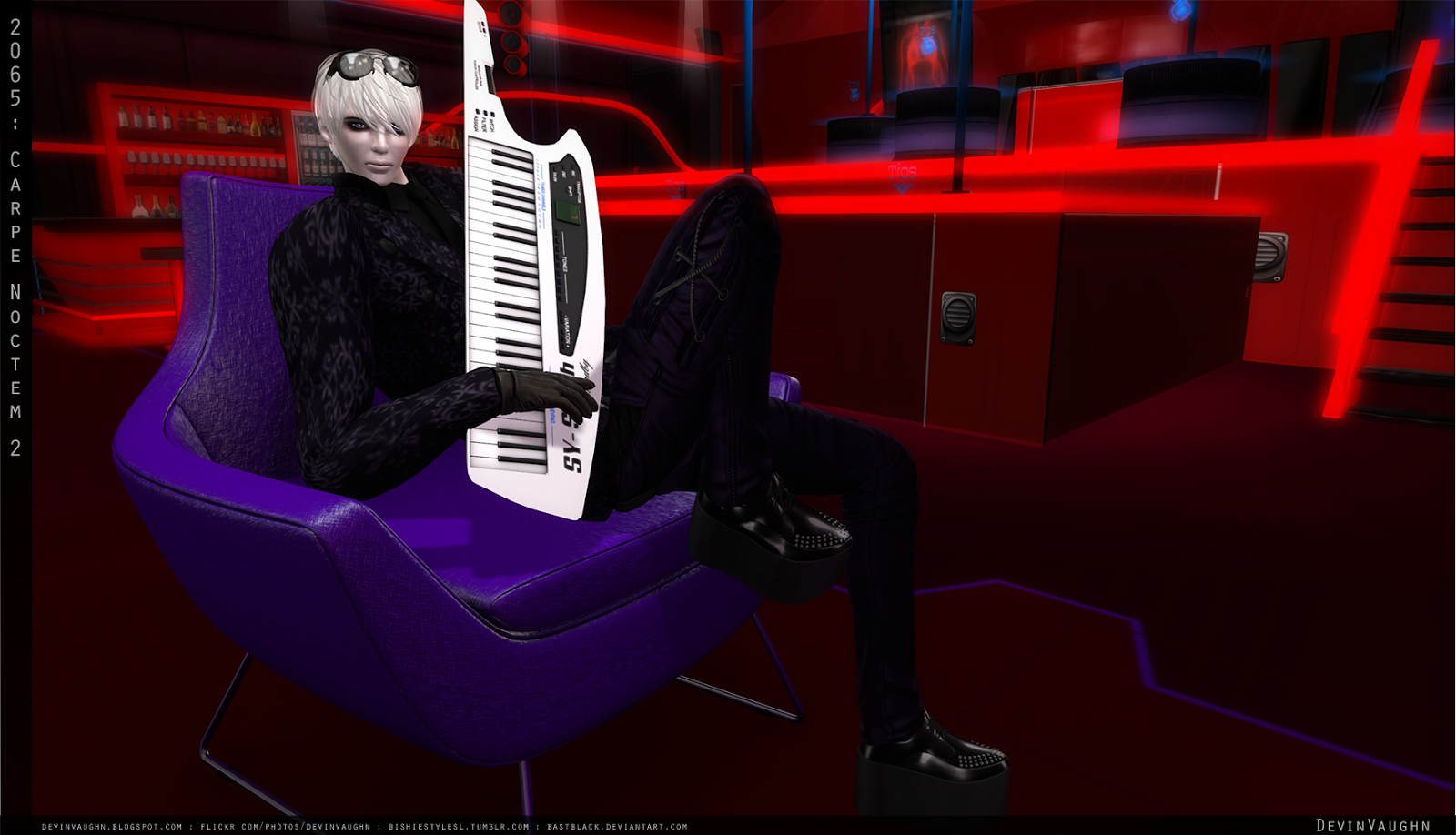 (click to enlarge)
STORYLINE: The Cursed A.N.G.E.L. thought he was well on his way to securing a hit song bound to attract an Eden. But his plans were foiled by a stupid pretty boy named NicNack. The guy was a rocking an retro-80s style as if he was born back then, and most likely was judging by his bleached pallor. The jerk stole his thunder when he whipped out a rival song targeting Edens called, "Your Blood is Mine." It shot straight to number one crushing his fledging effort. Oh how he hated that prick Nic.

Part two in the 2065 rock wars. This post was inspired by the outfit. When I put together the pieces, it reminded me of someone, so I went with it! lol NicNack is wearing the new California shades by Remarkable Oblivion available at the second year anniversary of the Men's Department. So many wonderful things are there, including the Cruising mesh gloves by O.M.E.N. The violet jacket and pants are both by No Salvation. You can score the jacket in the Sinister Goth Hunt. This month's theme is Vanity and the color is purple. Lots of fun things in this hunt. These awesome pants in a matching purple are in the 25 for 25 Hunt. Nic's hair is a wonderful subscriber gift from Argrace. The keytar is from Standby Inc's World Tour gacha. It comes in 2 versions, one that you rez and one you wear that triggers a playing animation. The Creeper shoes are unrigged mesh by Sugar. The Nova chair with materials by Trompe Loeil was from the space round of Collabor88. I looked all over for a link to where you can find it, but sadly it turns out to have been an event exclusive. The Dark Creature Kevin skin by Tableau Vivant was also an event exclusive to the Fantasy Collective. I took a gamble combining it with Glam Affair's newly released Horror/Frost series appliers for Slink hands and feet. They cost 95L each. It was close, but not close enough. The guys will have to wait for more Tableau Vivant Slink appliers to be released. This image was taken at the Reactor Room in Insilco.